What is depicted on this piece of artwork?

I am really intrigued by the artwork itself.

Is it possible for someone to identify this scene? 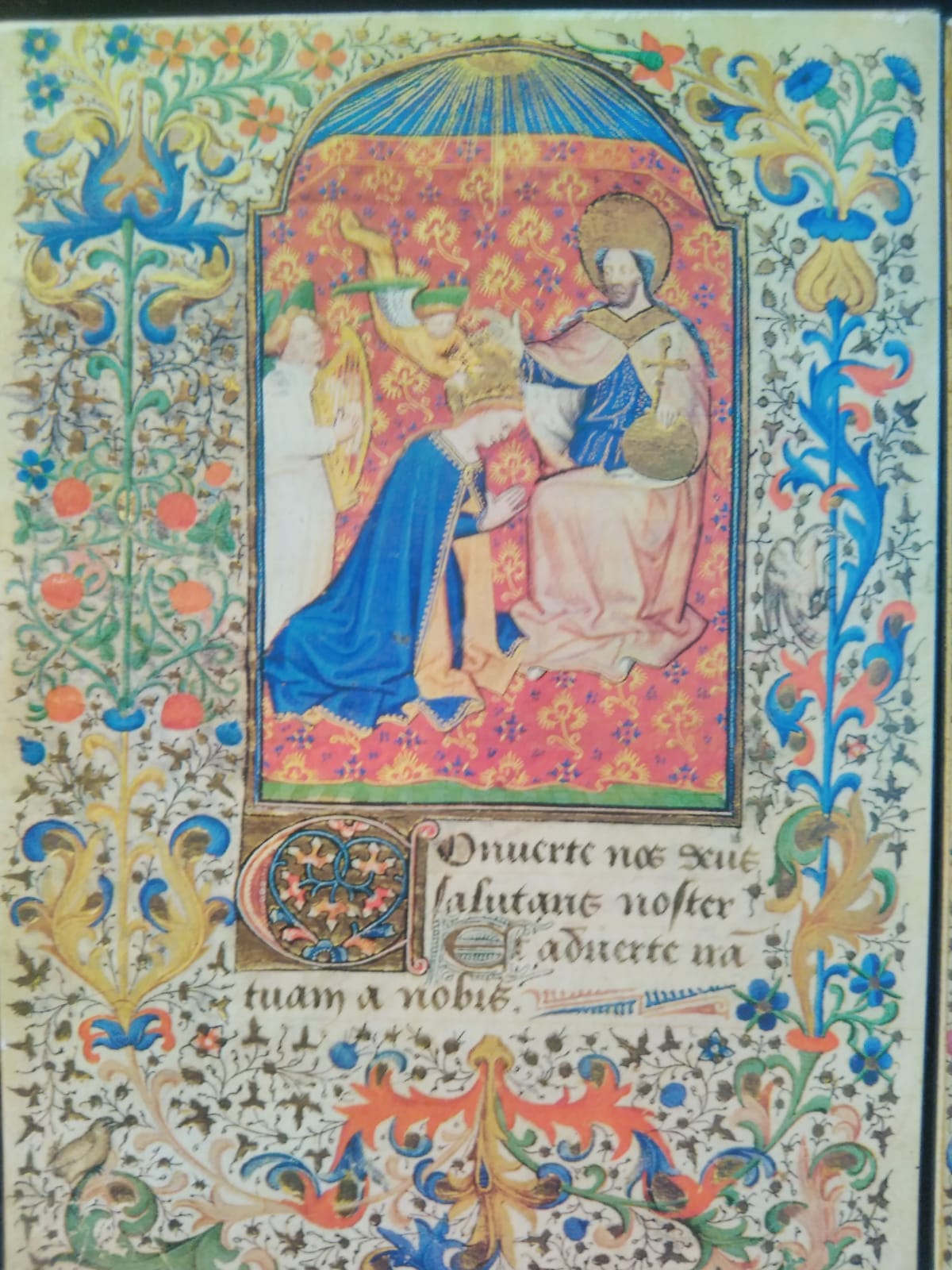 The Coronation of the Virgin or Coronation of Mary is a subject in Christian art, especially popular in Italy in the 13th to 15th centuries, but continuing in popularity until the 18th century and beyond. Christ, sometimes accompanied by God the Father and the Holy Spirit in the form of a dove, places a crown on the head of Mary as Queen of Heaven. In early versions the setting is a Heaven imagined as an earthly court, staffed by saints and angels; in later versions Heaven is more often seen as in the sky, with the figures seated on clouds. The subject is also notable as one where the whole Christian Trinity is often shown together, sometimes in unusual ways. Although crowned Virgins may be seen in Orthodox Christian icons, the coronation by the deity is not. Mary is sometimes shown, in both Eastern and Western Christian art, being crowned by one or two angels, but this is considered a different subject.

The belief in Mary as Queen of Heaven obtained the papal sanction of Pope Pius XII in his encyclical Ad Caeli Reginam (English: Queenship of Mary in Heaven) of October 11, 1954. It is also the fifth Glorious Mystery of the Rosary. The Roman Catholic Church celebrates the feast every August 22, where it replaced the former octave of the Assumption of Mary in 1969, a move made by Pope Paul VI. The feast was formerly celebrated on May 31, at the end of the Marian month, where the present general calendar now commemorates the Feast of the Visitation. In addition, there are Canonical coronations authorized by the Pope which are given to specific Marian images venerated in a particular place. - Coronation of the Virgin

The Latin (Converte nos)is from Psalm 84 and is part of Complines and the Little Office of the Blessed Sacrament amongst other places in the Divine Office of the Church:

R. And turn away Thy wrath from us.

This illuminated manuscript comes from a beautiful 15th-century leaf from a French Book of Hours with a large miniature of the Coronation of Mary.

Miniature of the Virgin kneeling before the enthroned God the Father, with an angel holding the crown of Mary. Behind them is a canopy. Miniature measures 100 mm x 65 mm (3.9 x 2.6 inches). The image is surrounded by a foliate border with red, blue, and pink flowers with green leaves; border also contains blue and gold acanthus leaves and penwork along left margin. One triple-line illuminated initial (the letter “C”) in burnished gold and red with white details. One single-line initial in burnished gold and blue. The text, in gold-brown Latin gothic script, is from Psalm 84:5.

I do not know if you have the reverse side of this image, so I will include it as part of my answer. 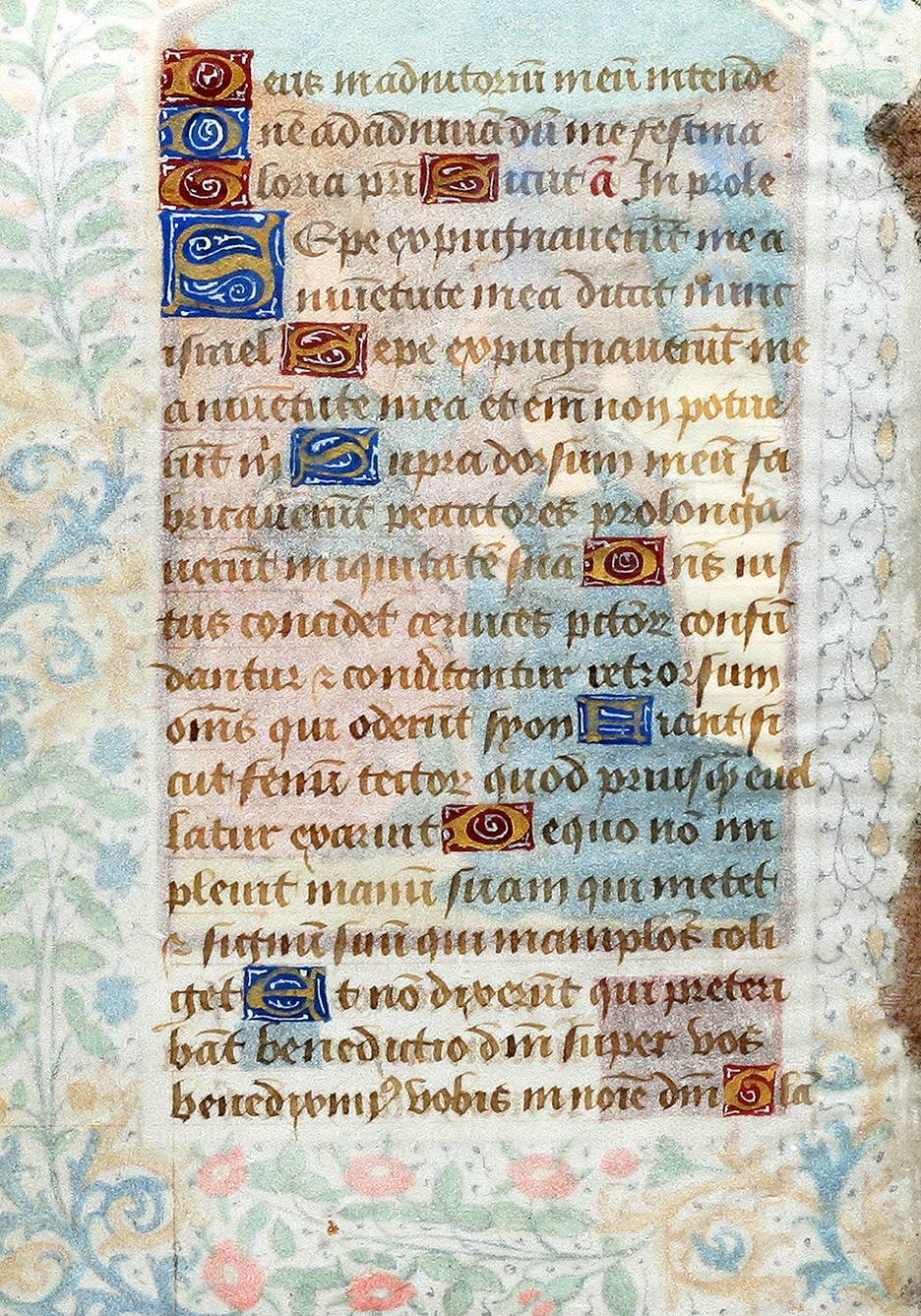 Again, this priceless artwork was made by a holy artist and the scene is a continuation of Mary's title. Notice how the artist change the background compared to the other post to make it into "A Beautiful Heavenly Realm" what a genius stroke.I think your seven pieces of artworks depicts the Titles of Mary based on Church Tradition and Church Fathers teaching. But, this one had a link to the Assumption Dogma and Mary was crown as Sovereign Queen of Heaven and Earth.

The title of this painting is "The Coronation of the Blessed Virgin Mary as Queen of Heaven and Earth".. It is the fifth Glorious Mystery of the Holy Rosary.

I assume if you have seven collection of this artwork, the other five pertains to other mysteries of the Holy Rosary. I'm curious how the artist depicted the "Assumption of Mary into Heaven" or the "Annunciation" if it happened that it is included in one of the seven artwork.

Explanation of the priceless artwork:

"I have fought the good fight, I have finished the race, I have kept the faith. From now on the crown of righteousness is laid up for me, which the Lord, the righteous judge, will award to me on that day— and not only to me, but to all who crave His appearing. "(2 Timothy4:7-8)

Below is a description how Mary was crown in Heaven although the Most Holy Trinity in the artwork is only represented here as the source of Light.

I found the back cover translator's notes of the small book compiled by a deceased Bosconian Priest Fr.Adolf Faroni, SDB fascinating. The title of the book taken from St.Bonaventure words "Mary, the jewel of the human race", it composes of words of praises and quotes coming from 99 famous Saints & Church Fathers and Popes.Also, it contains a beautiful prayer to Mary coming from St.John Paul II the Great whose known for the famous line "Totus Tuus" composed during the Celebration of the Marian Year.

Below is the back cover tranlator's notes describing the "Salve Regina"

"Then the Eternal Father announced to all the angels & saints; "Our Daughter Mary has been chosen by our will from among all creatures as the first in our favor, and she has never fallen from the position of a true Daughter.Therefore, She has a claimed to our Kingdom, of which She is to be acknowledged and crowned the lawful Sovereign and Queen".

The Incarnate Word declared; "To my true and natural Mother belong all the creatures that I have created and redeemed.And of all things over which I am King, She too shall be the rightful Queen." And the Holy Ghost said; "By the title of my only chosen Spouse, to which She has faithfully corresponded, the crown of Queen is also due to Her for all eternity." Then the three Divine Persons solemnly placed on Mary's bowed head a splendid gleaming crown of glory which far exceeds in beauty any crown that ever has been or ever will be rewarded to a creature by God. At the same time a Voice sounded from the Throne saying; "Our Beloved and Chosen One among creatures, Our Kingdom is yours.You are the Queen and Sovereign of the Seraphim and of all our ministering angels and of all the created universe.We give you power,majesty and dominion over it. While filled with grace beyond all others, you humbled yourself to the lowest place in your own estimation. Receive now the Supreme Honor which you deserve, and participate in the Sovereign Power exercised by the Divinity over all that Our Omnipotence has created. From your Royal Throne you shall rule over hell and earth and nature. Our own Will shall ever be ready to accomplish your will.

i'm looking forward to other five remaining priceless piece of artwork. The artist for me is holy and was guided by the Holy Spirit in expressing the Titles and Praises that belongs to Mary as scriptures "all generation shall call me blessed."

Others: The latin phrase takes this essence of prayer.

V. Convert us, O God our Savior. R. And turn away Thy wrath from us.

Not the answer you're looking for? Browse other questions tagged catholicism art identify-this or ask your own question.

2
Which Jesus' movie is shown in this image?
14
Who is this Saint?
2
What is depicted on this small piece of artwork with Mary and the Apostles?
0
Can someone tell more about this artwork of Jesus Christ?
2
Was God “unmerciful” to Ananias & Sapphira in Acts 5:1-10?
3
How does the Magisterium protect the faithful and the general public against misinformation of the Catholic faith in the Internet Era?
3
How voluntary is original sin in Adam's descendants?