What is depicted on this small piece of artwork with Mary and the Apostles?

Can anyone tell me what is depicted here? 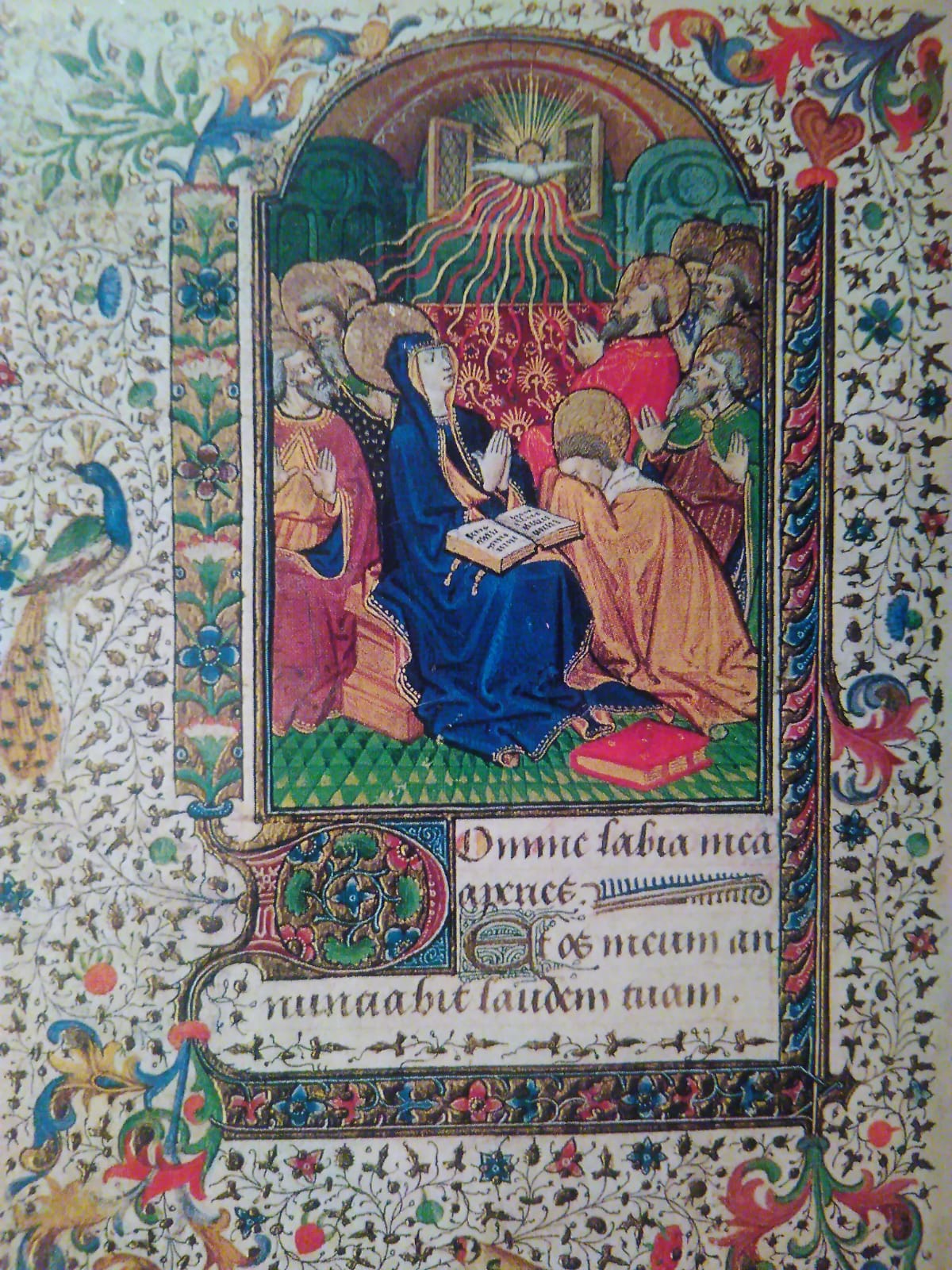 This is a (very typical) depiction of Pentecost.

Acts 1:12-14; 2:1-4 (DRB) Then they returned to Jerusalem from the mount that is called Olivet, which is nigh Jerusalem, within a sabbath day's journey. 13 And when they were come in, they went up into an upper room, where abode Peter and John, James and Andrew, Philip and Thomas, Bartholomew and Matthew, James of Alpheus, and Simon Zelotes, and Jude the brother of James. 14 All these were persevering with one mind in prayer with the women, and Mary the mother of Jesus, and with his brethren. ... And when the days of the Pentecost were accomplished, they were all together in one place: 2 And suddenly there came a sound from heaven, as of a mighty wind coming, and it filled the whole house where they were sitting. 3 And there appeared to them parted tongues as it were of fire, and it sat upon every one of them: 4 And they were all filled with the Holy Ghost, and they began to speak with divers tongues, according as the Holy Ghost gave them to speak.

The picture depicts the Descent of the Holy Spirit upon the Disciples of Jesus and Mary on the day of Pentecost.

The events of Acts Chapter 2 are set against the backdrop of the celebration of Pentecost in Jerusalem. There are several major features to the Pentecost narrative presented in the second chapter of the Acts of the Apostles. The author begins the narrative by noting that the disciples of Jesus "were all together in one place" on the "day of Pentecost" (ημέρα της Πεντηκοστής). The verb used in Acts 2:1 to indicate the arrival of the day of Pentecost carries a connotation of fulfillment.

There is a "mighty rushing wind" (wind is a common symbol for the Holy Spirit) and "tongues as of fire" appear. The gathered disciples were "filled with the Holy Spirit, and began to speak in other tongues as the Spirit gave them utterance". Some scholars have interpreted the passage as a reference to the multitude of languages spoken by the gathered disciples, while others have taken the reference to "tongues" (γλώσσαι) to signify ecstatic speech. In Christian tradition, this event represents fulfillment of the promise that Christ will baptize his followers with the Holy Spirit. (Out of the four New Testament gospels, the distinction between baptism by water and the baptism by Christ with "Holy Spirit and fire" is only found in Matthew and Luke.) - Pentecost

But that is not all:

These words in the picture are the first words that the Church pronounces each morning at Matins as part of her Divine Office.

That my mouth shall proclaim your glory (praises). (Psalm 50:7)

It is in fact the mystery of the Birth of the Church and her praises to her Creator.

The painting is rich and it would be an injustice to the artist if we missed the finer details of his artwork depicting the acknowledged role & character of Mary and the Apostles plus symbols portrayed in the art.

The artwork is priceless for me as the artist presented the following:

4.The Apostles kneeling infront of Mary was St.John the beloved, notice he was contrite and clothe with the garment of purity. Also, look at the scriptures it was gold colored same with St.John clothing meaning only those who have a pure heart can see God or understand the mysteries of the Word of God. Among the Apostles St.John Gospel is mystical and his language are supernatural, thanks to Mary teaching St.John the virtue of humility and purity plus a contrite heart.In addition, have you noticed the white garment on the shoulder of St.John is white signifying "holiness", that's why only the Blessed Virgin Mary and St.John face was holy all the rest of the Apostles face was still earthly.

The artist presented the role & character of Mary and the three prominent Apostles namely St.Peter, St.James the Greater and St.John the beloved. But the most important revelation of this artwork is when the artist depicted Mary as the Seat of Wisdom and the Teacher of the Apostles in understanding the scriptures.

Wisdom in the Old Testament was described as Mother, Teacher and Consoler and this artwork depicted that Mary's Role. Plus the Pentecost is the sending of the Holy Spirit to pour out Her Sevenfold Gifts to Anoint all the Apostles.Who do you think received the Highest gifts of Anointing aside from Peter who is the Leader?

The Clothing reveals who has the Highest Authority, that's why Mary is the Mother of the Church as She is the one who prepared the hearts of all the Apostles how to receive the Gifts of the Holy Spirit.

Mary is the Seat of Wisdom, the one who is greater that St.John the Baptist who can testify to all the Apostles the Truth about who Jesus is. The artwork reveals Mary is the "another Advocate" and the "Spirit of Truth" as the Holy Spirit was sent to dwell in the hearts of all the Apostles. Only Mary had perfected the dwelling place for the Holy Spirit by the Seven Swords that pierce Her Sorrowful & Immaculate Heart.

"Wisdom has built her house, She has hewn out her seven pillars" (Proverbs9:1)

Hope this explanation made you appreciate the priceless artwork you have in your possession.

Not the answer you're looking for? Browse other questions tagged catholicism art .

7
How are the 12 Anathemas of St. Cyril against Nestorius supposed to be read?
8
What is the consequence of being baptized twice, according to the Catholic Church?
7
In RC doctrine, when is pop culture, like Bernstein's Mass, appropriate to tell sacred messages?
4
According to Catholicism, what is the difference between forgiveness and release from punishment?
1
What is depicted on this piece of artwork?
0
Can someone tell more about this artwork of Jesus Christ?
3
Was God "unmerciful" to Ananias & Sapphira in Acts 5:1-10?
4
How to not awkwardly bow to thurifer during Mass?