What kinds of liquids can Catholics have while fasting?

There are times of the year when Catholics are obligated to fast, such as Ash Wednesday and Good Friday. During that time, what kind of liquids are allowed? Water only? Juice? Smoothies? Meal replacement shakes?

What kinds of liquids can Catholics have while fasting?

First of all let us look at the rules for fasting and abstinence in the Roman Catholic Church. Here is what Pope St. Paul VI has to say in his Apostolic Constitution Paenitemini. The Code of Canon Law (1983) in the Latin Rite reflects this completely.

As regards those of a lesser age, pastors of souls and parents should see to it with particular care that they are educated to a true sense of penitence.

For the Eastern Catholic Churches, the Code of Canons of Oriental Churches prescribes (Canon 882):

"Can. 882: On the days of penance the Christian faithful are obliged to observe fast or abstinence in the manner established by the particular law of their Church."

What we have thus noticed thus far is that Pope Paul's Paenitemini and Canon Law do not speak on the subject of liquids. Liquids consumed during the course of the major (principle) meal would simply be part of that meal.

Besides a complete meal, the Church now permits a collation usually taken in the evening. In considering this point proper allowance must be made for what custom has introduced regarding both the quantity and the quality of viands allowed at this repast. In the first place, about eight ounces of food are permitted at the collation even though this amount of food would fully satisfy the appetites of some persons. Moreover, the attention must be paid to each person's temperament, duties, length of fast, etc. Hence, much more food is allowed in cold than in warm climates, more to those working during the day than to those at ease, more to the weak and hungry than to the strong and well fed. As a general rule whatever is deemed necessary in order to enable people to give proper attention to their duties may be taken at the collation. Moreover, since custom first introduced the collation, the usage of each country must be considered in determining the quality of viands permitted thereat. In some places eggs, milk, butter, cheese and fish are prohibited, while bread, cake, fruit, herbs and vegetables are allowed. In other places, milk, eggs, cheese, butter and fish are permitted, owing either to custom or to Indult. This is the case in the United States. However, in order to form judgments perfectly safe concerning this point, the Lenten regulations of each diocese should be carefully read. Finally, a little tea, coffee, chocolate or such like beverage together with a morsel of bread or a cracker is now allowed in the morning. Strictly speaking, whatever may be classified under the head of liquids may be taken as drink or medicine at any time of the day or night on fasting days. Hence, water, lemonade, soda, water, ginger ale, wine, beer and similar drinks may be taken on fasting days outside meal time even though such beverages may, to some extent, prove nutritious. Coffee, tea, diluted chocolate, electuaries made of sugar, juniper berries, and citron may be taken on fasting days, outside meal time, as medicine by those who find them conducive to health. Honey, milk, soup, broth, oil or anything else having the nature of food, is not allowed under either of the two categories already specified. It is impossible to decide mathematically how much food is necessary to involve a serious violation of this law. Moralists as well as canonists concur in holding that an excess of four ounces would seriously militate against the obligation of fasting, whether that much food was consumed at once or at various intervals during the day because Alexander VII (18 March, 1666) condemned the teaching of those who claimed that food so taken was not to be regarded as equaling or exceeding the amount allowed (Denzinger, Enchiridion Symbolorum et Definitionum, tenth ed. Freiburg im Br., 1908, No. 1129). - Fast (Catholic Encyclopedia)

The key point to notice here is that, unlike the fasting required before Communion, the Lenten fasts were--even in stricter times--regarded as fasts from food only, not from both food and liquid. Therefore: If you’re taking a liquid that has considerable food value, you’re breaking the fast. If you’re taking liquid in the usual sense of “having a drink”, you’re not breaking the fast. Having a glass of wine during the main meal of the days is quite permitted during a fast day. However, enjoying an alcoholic drink outside a meal would definitely not be in the spirit of doing penance on Ash Wednesday or Good Friday.

Rauchbier, or “smoke beer,” is made using malts that have been dried over fire—-thus gaining the smoky taste of cured meats like ham and bacon. At one time all beers malts were produced over fire, but in medieval Bavaria beers of this type came to be associated with Lent when the rich, smoky tones of meat were dearly missed. There is, of course, an official blessing for beer (“Bless, O Lord, this creature beer . . . ”) which one may safely assume is more efficacious in the original Latin: ” Benedic, Domine, creaturam istam cerevisiae, quam ex adipe frumenti producere dignatus es: ut sit remedium salutare humano generi, et praesta per invocationem nominis tui sancti; ut, quicumque ex ea biberint, sanitatem corpus et animae tutelam percipiant. Per Christum Dominum nostrum. Amen.” - Rauchbier (First Things) 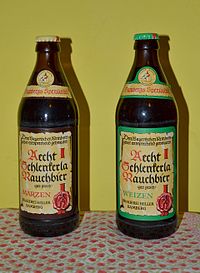 I would like to conclude this answer on a personal note. I spent 20 years in a monastery attached to the Old Rite. The community practices the complete Lenten fast (40 days of fasting) for the complete season of Lent. The monks are quite free to drink a glass of wine (it is a French thing) at the principle meal of the day (Ash Wednesday and Good Friday included), but most do not.

St. Thomas Aquinas writes, addressing the question "Whether it is requisite for fasting that one eat but once?":

It is, however, possible to sin and lose the merit of fasting, by partaking of too much drink: as also by eating immoderately at one meal.

Consuming an "liquid meal" would not be in the spirit of the fast.

Also, from "Questions & Answers About Lent":

Q. I understand that Catholics ages 18 to 59 should fast on Ash Wednesday and on Good Friday, but what exactly are the rules for these fasts?

A. Fasting on these days means we can have only one full, meatless meal. Some food can be taken at the other regular meal times if necessary, but combined they should be less than a full meal. Liquids are allowed at any time, but no solid food should be consumed between meals.

Not the answer you're looking for? Browse other questions tagged catholicism diet fasting or ask your own question.

9
How long, and in what cases did Catholics participate in the Black Fast?
15
When Did Catholics Cease to Fast as the Orthodox Do?
7
What rules does the Catholic Church have for venerating crosses/crucifixes on Good Friday?
8
What was the Original Purpose of Fasting from “Wine” and “Olive Oil” in the Orthodox Tradition?
6
Is there a medical dispensation formally allowed from Lenten fasting in Catholicism?
7
Which Episcopal Conferences set alternatives for abstinence on Fridays?
6
Which Lent should someone Baptized in an Eastern Roman Catholic rite follow?
4
Are those who have a history of eating disorders excused from obligatory Roman Catholic fasts?
1
Are Catholics allowed to drink coconut water during the hour before they take communion?
1
Are Filipino Roman Catholics required to not have meat on all Fridays of Lent?