How universal are the “color” masses in the Catholic Church?

In my diocese we have certain "color" masses:

I also saw something about a Green mass for farmers, but I don't think that's official yet. Black mass would have a pretty bad connotation. We do have a polka mass, it's not a polka-dot mass - that would be strange, although not a lot stranger than a polka mass.

How universal are the “colour” Masses in the Catholic Church?

It would seem that that the so called "Colour Masses" are not universally commemorated, but are somewhat popular in some countries and/or amongst those who are connected within certain spheres of employment that are subject to these Masses. The colours employed at Mass do not always correspond with the title in question. The liturgical colour of the Blue Mass is always white. Blue is the colour that often associated with police officers and that is why it is called the Blue Mass. The liturgical colours of these Votive Masses remain true to liturgical decorum. 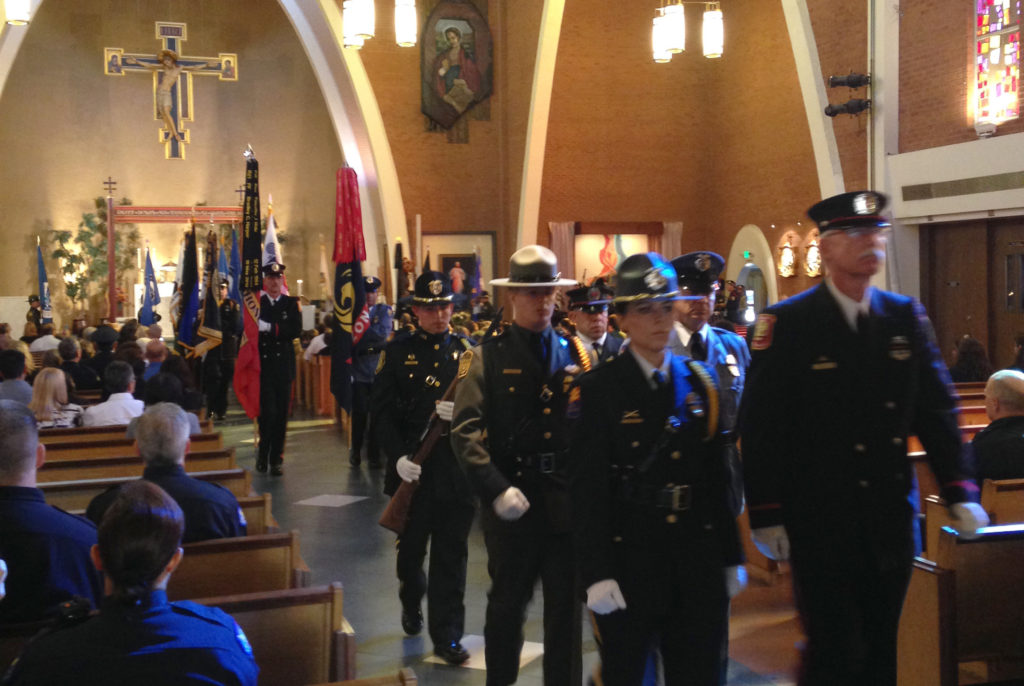 An honor guard made up of emergency personnel process out of Ss. Simon and Jude Cathedral during the annual Blue Mass Nov. 5,2015

Many of these so called designated Masses are associated with certain saints, even when the Votive Mass is that of the Holy Spirit (red).

At present I have permission from my Local ordinary to publish a document entitled A Journey through the Year with the Church which is a collection of Catholic traditions at either a local and/or universal level. In chapter 15, on subject of Moveable Feasts, Practices and Traditions, I listed a number of votive Masses that could be celebrated on no fixed date within the liturgical year. Some of them concern these various Masses.

The Red Mass is often associated wit St. Thomas More the patron saint of all statement, politicians, lawyers and people in public life. Even though it it the votive Mass of the Holy Spirit, it is precisely for invoking the guidance of the Holy Ghost on those in public office that this tradition has started.

The liturgical colour or the Gold Mass is white.

The Gold Mass is relatively new and is not yet very popular, but as time moves on it may increase in popular devotion.

The Gold Mass may celebrated annually in the Catholic Church since 2016 for Catholic scientists. The first "Gold Mass" for Catholic scientists was held on November 15, 2016, in the chapel of the Massachusetts Institute of Technology (MIT), in Cambridge, Massachusetts. The sponsor is the Society of Catholic Scientists, which was incorporated in the summer of 2016 in the territory of the Archdiocese of Philadelphia. The color gold was chosen because it represents the alchemy of science and it is the color that is worn at graduation ceremonies (on the hood of those who are being awarded bachelors, masters, or doctoral degrees in the academic discipline of science). The date of November 15 was chosen because it is the feast day of St. Albert the Great, a Dominican Doctor of the Church who is the patron of scientists.

Although on the Votive Mass in honour of St. Albert white vestments are to be used, one is free to use gold coloured vestments on this occasion. “Cloths of gold” can replace can replace the liturgical colours of white, green and red. This is permitted so due to its’ intrinsic value as a rare metal.

A Gold Mass is easy to arrange. One needs: (a) a church or chapel, (b) a celebrant and homilist, (c) a nearby hall to hold the reception, and (d) permission of the local bishop. Such masses should be advertised several weeks in advance through local Catholic media and on local college campuses. Information about upcoming Gold Masses will be posted on the SCS website. Though the above elements are the only things required for a Gold Mass, it is also possible to make the Gold Mass a more eleborate event, with a public lecture afterwards. An example of this was the Gold Mass held at the University of Notre Dame in 2017. - Gold Masses

St. Albert the Great, pray for us.

The liturgical colour of the Blue Mass is white.

The Blue Mass is a Mass offered for the intentions of all first responders (police, fire fighters and paramedics). It gets it term of the Blue Mass from the fact that most first responder’s uniforms are blue. This Mass can be said any day of the year. In the USA, President John F. Kennedy, in 1962, declared May 15 as Peace officers Memorial Day and the week in which May 15 falls as Police Week. As a result, many places in the USA hold their annual Blue Mass sometime in early May. A more natural choice for other countries would be a votive Mass of St. Michael the Archangel, who is the patron saint of first responders. September 29 is the feast day of St. Michael the Archangel and seeing that the month of September has been traditionally dedicated to the Holy Angels a date within this month would be most appropriate.

St. Michael the Archangel, pray for us.

St. Florian, patron saint of firefighters, pray for us.

The White Mass and /or Rose Mass

The liturgical colour of the White or Rose Mass is white if the votive Mass is in honour of St. Raphael and it is the same colour if a Mass is said in St. Luke's honour.

Since 1992 the John Carroll Society has sponsored a Rose Mass in the Archdiocese of Washington, to acknowledge medical, dental, nursing, and allied workers and volunteers and the many health care institutions in the Archdiocese of Washington. It takes place annually on the fourth Sunday of Lent (“Laetare Sunday”), a Sunday when the vestments worn by the celebrant are rose-colored. The color rose was chosen as the rose has come to symbolize “life,”[70] The Lansing Guild of the Catholic Medical Association hosts a Rose Mass in Ann Arbor, Michigan. - Rose Mass

St. Raphael, pray for us.

The liturgical colour of the Green Mass is white.

The Green Mass is the newest arrival in the so called Coloured Masses that exist today and of yet not very well known at all. It is celebrated in connection with St. Francis of Assisi and inspired no doubt by Pope Francis' encyclical letter Laudato Si

The Archdiocese of Atlanta will celebrate its third annual Green Mass for all who volunteer or work in “green jobs” or environmental sustainability, and for all those who love planet earth, on Thursday, October 4, the Feast of St. Francis, at 12:10 p.m.

This Mass will be held at The Catholic Shrine of the Immaculate Conception, 48 Martin Luther King Jr. Drive, SW, Atlanta, Georgia 30303. Bishop Ned Shlesinger will be the celebrant.

We invite you to join us for this special Mass, on the feast day of St. Francis, as we share in the beauty of God’s creation and pray for those who work diligently to protect our planet. You are also invited to join us for a luncheon following the Mass featuring Georgia grown produce.

St. Francis of Assisi, pray for us.

Not the answer you're looking for? Browse other questions tagged catholicism tradition liturgy mass church-local or ask your own question.

4
What are liturgical honours and privileges for the Patrons of categories of people?

15
Why is purple the color of Lent?
10
Which liturgical rites (forms of Mass) are presently used in the Roman Catholic Church?
4
Why does the Catholic church have so many Masses throughout the week?
10
Why do Catholic laity cross themselves three times before the Gospel is read?
10
How did the Catholic Church function logistically/liturgically prior to the invention of the printing press?
4
Why do Solemnities have different readings for the vigil masses?
2
Where in the Catholic Church is red wine used for mass?
2
Is there a standard text of the Litany of Loreto accepted for universal use by the Catholic Church?
1
Master of Ceremonies wears purple at High Masses according to the Extraordinary Form of the Mass?
3
What are some examples of Sacred Tradition in the Catholic Church?