What are liturgical honours and privileges for the Patrons of categories of people?

Therefore, after due consideration and willingly acceding to the petitions addressed to me, I establish and declare Saint Thomas More the heavenly Patron of Statesmen and Politicians, and I decree that he be ascribed all the liturgical honours and privileges which, according to law, belong to the Patrons of categories of people.

What are these liturgical honors and privileges?

For groups and regions that can have a particular calendar it is just the liturgical memororial. Rules on this are in the Instruction of the Sacred Congregation for Divine Worship Calendaria particularia (in Latin; AAS 62 [1970], 651-663). As a group like Politicans has no own particular calendar (and most time no own litrugical celebrations), I have no idea what kind of litrugical honors a Patron can be granted.

Clarification: After Ken's Answer I want to further explain my question.

Such privileges could be:

Maybe the Red, Blue, ... Masses are such a privilege, but than I did not understand it. I have never heared before of this pracitice (Germany). If the Saint is mentioned in these masses, it may be one of the liturgical privileges I am searching for.

What are liturgical honours and privileges for patron saints?

The liturgical honours of each particular saint is that they each have a fixed day in which they may be particularly honoured at Mass or with a Mass in their honour in their feast days. Some saints have the special privilege of having a special blessing for something attached to them in the Rituale Roamanum, but not many. For example on the Feast of St. John the Evangelist there is a Blessing for Wine. This particular blessing is reserved and can only be used on St. John's Day (December 27). Not every saint has special liturgical honours!

More such examples are as follows:

Here follows a few particular examples of some historical individual honours reserved to some saints by tradition: 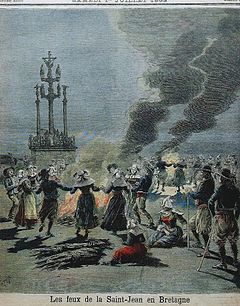 Saint John's Fire with festivities in front of a Christian calvary shrine in Brittany, 1893

As for St. Thomas More the following may be of interest. St. Thomas More has the privilege of being the patron saint of all statement, politicians, lawyers and people in public life. Not many saints are personally proclaimed patron saints by the pope in a Motu Proprio. The vast majority are not. St Thomas is thus in the category of special few. Deo Gratias.

St. Thomas Moore was an English lawyer, humanist, scholar, father of four children, and martyr. He was also Lord Chancellor from December 31, 1525 to November 3, 1532. He was beheaded on July 6, 1535, for refusing to take the Oath of Succession. He is jointly commemorated on June 22 with St. John Fisher. He is the patron saint of statesmen and politicians and thus of lawyer also.

Churches that are under the patronage of St. Thomas More have the liturgical privilege of celebrating his feast day as a solemnity, even if it falls on a Sunday.

The Red Mass may be celebrated on the feast of St. Thomas More who the patron saint of lawyers. The votive Red Mass has no fixed day in which it may be celebrated, although most countries place it around the commencement of their judicial year.

The St. Thomas More Society of Los Angeles is an association of Catholic legal professionals. The society celebrates its namesake who has inspired lawyers of all faiths for generations and has selected St. Thomas More as patron of the Red Mass. - Red Mass

The Red Mass has a rich history. Beginning in England during the Middle Ages and continuing even through World War II, the entire bench and bar attended the Mass at the opening of the Court’s term.

Liturgically, the Red Mass is celebrated as the Solemn Mass of the Holy Spirit. Its name derives from the traditional red color of the vestments worn by clergy during the Mass, representing the tongues of fire symbolizing the presence of the Holy Spirit. The Judges of the High Court, who were all doctors of the law, also wore red robes or academic hoods. With so many participants in red, the celebrations became irrevocably known as the Red Mass. The Red Mass historically marked the official opening of the judicial year of the Sacred Roman Rota, the Tribunal of the Holy See.

In Ireland, the Red Mass is celebrated on the first Monday of October, which is the opening day of the Michaelmas Law Term.

In Canada, the Red Mass was first celebrated in Québec City in 1896, in Toronto in 1924 and in Montréal in 1944. Its sponsorship was assumed by the Guild of Our Lady of Good Counsel in 1931 and by The Thomas More Lawyers' Guild of Toronto since 1968. It was re-instituted in Sydney, Australia in 1931. - Red Mass (Wikipedia)

More sources can be viewed as following:

Welcome to the St. Thomas More Society of Los Angeles

A Man for All Seasons is great classic movie (1966) entertainment for the entire family today!

Not the answer you're looking for? Browse other questions tagged catholicism saint liturgy intercession-of-saints or ask your own question.

4
How universal are the “color” masses in the Catholic Church?
1
If your the cathedral parish of your diocese has burned down, is the feast day of the patron saint still a solemnity?

9
How are passages vetted for inclusion in officially sanctioned liturgical readings?
9
What exactly is the purpose of a Patron Saint?
3
What place do ritual and ceremony have in the church today? (Liturgical POV)
10
Which liturgical rites (forms of Mass) are presently used in the Roman Catholic Church?
2
What are the differences between Catholic and Episcopal saints?
27
For Catholics who object to Vatican II, what are the key issues?
6
In Catholicism, what can the Saints be patrons of?
0
Do Mary and the other saints know what we are praying for before we ask them?
1
What are the different Categories of Charismatic Graces?