When did Mary and Joseph marry?

They were only engaged when Mary was concieved by the Holy Spirit, correct?

They would have had to marry before Jesus' birth, correct? In order for him not to be considered a bastard born out of wedlock?

When were Joseph and Mary considered married?

The Catholic Church does however celebrate the a liturgical feast on the 23rd of January, known as the Espousals of the Blessed Virgin Mary or Marriage of the Virgin Mary (Desponsatio Beatae Mariae Virginis).

A feast of the Latin Church. It is certain that a real matrimony was contracted by Joseph and Mary. Still Mary is called "espoused" to Joseph ("his mother Mary was espoused to Joseph", Matthew 1:18) because the matrimony was never consummated. The term spouse is applied to married people until their marriage is consummated (Colvenerius, Cal. Marian., 23 Jan.). - Espousals of the Blessed Virgin Mary

What is certain is that St. Joseph must have betrothed Mary prior to the Annunciation of the Angel Gabriel, that much is sure. However, since Mary and Joseph were dwelling together onlookers would assume the baby was conceived in wedlock. It seems that at this time in history only Our Lady and St. Joseph were aware of Jesus' divine origins.

When the Archangel Gabriel visited Mary and declared unto her that she was called to be the Mother of God, as we see recorded in Luke 1, her response would become the cause of the spilling of a whole lot of ink over the centuries: “How shall this happen, since I know not man?”.

For Catholics this is an indication of Mary’s vow of perpetual virginity. It’s really quite simple. If Mary and Joseph were just an ordinary couple embarking on a normal married life together, there would be no reason to ask the question. Mary would have known very well how it could be that the Angel was saying she would have a baby. As St. Augustine said it:

Had she intended to know man, she would not have been amazed. Her amazement is a sign of the vow (Sermon 225, 2).

But Protestants do not see it as quite so simple. Reformed Apologist James White gives us an example of the most common objection to our “Catholic” view of this text:

Nothing about a vow is mentioned in Scripture. Mary’s response to the Angel was based upon the fact that it was obvious that the Angel was speaking about an immediate conception, and since Mary was at that time only engaged to Joseph, but not married, at that time she could not possibly conceive in a natural manner, since she did not “know a man” (Mary—Another Redeemer? p. 31.).

Among the errors in just these two sentences there are two that stand out for our purpose here.

There was no such thing as engagement (as it is understood in modern Western culture) in ancient Israel. The text says Mary was “betrothed” or “espoused” (Gr.—emnesteumene), not engaged. Betrothal, in ancient Israel, would be akin to the ratification of a marriage (when a couple exchanges vows in the presence of an official witness of the Church) in Catholic theology. That ratified marriage is then consummated—in the normal course—on the couple’s wedding night. So when Luke 1:27 says Mary was betrothed, it means they were already married at the time of the annunciation. If this were an ordinary marriage, St. Joseph would then have had a husband’s right to the marriage bed—the consummation.

This simple truth proves devastating to Mr. White’s (and the Protestant's) argument. If Joseph and Mary were married—and they were—and they were planning the normal course, Mary would have known full and well how she could and would have a baby. As St. Augustine said, the question reveals the fact that this was not just your average, ordinary marriage. They were not planning to consummate their union.

For those who are not convinced “betrothed” equals “married” for Mary and Joseph; fortunately, the Bible makes this quite clear. If we move forward in time from the “annunciation” of Luke 1 to Matthew 1 and St. Joseph’s discovery of Mary’s pregnancy, we find Matthew 1:18 clearly stating Mary and Joseph were still “betrothed.” Yet, when Joseph found out Mary was “with child,” he determined he would “send her away privately” (vs. 19). The Greek verb translated in the RSVCE to send away is apolusai, which means divorce. Why would Joseph have to divorce Mary if they were only engaged?

Further, the Angel then tells Joseph:

Do not fear to take Mary your wife, for that which is conceived in her is of the Holy Spirit . . . When Joseph woke from sleep, he did as the angel of the Lord commanded him; he took his wife (vss. 20-24).

Notice, Joseph took Mary “his wife,” indicating both St. Matthew and an archangel considered this couple married even though they were said to be “betrothed.” “Betrothed” is obviously much more than “engaged.”

Moreover, months later we find Joseph and Mary travelling together to Bethlehem to be enrolled as a family according to the decree of Caesar Augustus, just before Jesus would be born. They were obviously married; yet, even then, they were still said to be “betrothed” (see Luke 2:5).

So let's recap what have we have uncovered. First, Joseph had already taken his espoused “wife” into his home and was caring for her. Second, Scripture reveals him to be her legal husband and to have travelled with Mary to be enrolled with her as a lawfully wedded couple and family. Third, she was called St. Joseph’s “wife” by the angel of the Lord… and yet, they were still referred to as betrothed.

Referring to Mary and Joseph as “engaged” in the face of all of this evidence would be like calling a modern couple at their wedding reception “engaged” because they have yet to consummate their marriage.

Once the fact that Mary and Joseph were already married at the time of the annunciation is understood, Mary’s “How shall this happen…” comes more into focus. Think about it: If you were a woman who had just been married (your marriage was “ratified,” but not consummated) and someone at your reception said—or “prophesied”—that you were going to have a baby—that would not really be all that much of a surprise. That is the normal course of events. You marry, consummate the union, and babies come along. You certainly would not ask the question, “Gee, how is this going to happen?” It is in this context of Mary having been betrothed, then, that her question does not make sense… unless, of course, you understand she had a vow of virginity. Then, it makes perfect sense.

Error #2: Mr. White claimed, “…it was obvious that the angel was speaking about an immediate conception.” And, closely related to this, Mr. White then claimed Mary asked the question, "How shall this happen...?" because she knew "at that time she could not conceive in a natural manner?"

Really? It was obvious?

There is not a single word in this text or anywhere else in Scripture that indicates Mary knew her conception was going to be immediate and via supernatural means. That’s why she asked the question, "How shall this happen...?" It appears she did not know the answer. How could she? Why would it ever enter into her mind? There would be no way apart from a revelation from God that she could have known. And most importantly, according to the text, the angel did not reveal the fact that Mary would conceive immediately and supernaturally until after Mary asked the question.

One final thought: When Mary asked the question, "How shall this happen, since I do not know man," the verb to be (Gr.-estai) is in the future tense. There is nothing here that would indicate she was thinking of the immediate. The future tense here most likely refers to… the future. The question was not how she could conceive immediately. The question was how she could conceive ever. The angel answered that question for her. - When Were Joseph and Mary Married? 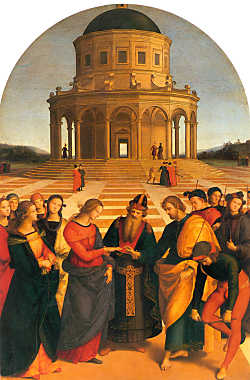 Marriage of the Virgin by Raphael

There are many old paintings and other works of art which portray St. Joseph and the Blessed Virgin Mary standing before a Jewish priest. Some of these are said to be depictions of their betrothal ceremony, while others are of the actual wedding. There are generally few differences in the depictions of the two ceremonies, and most of these works' titles (or, at least the English translations of their titles) indicate that they are of the wedding. - The Wedding of Joseph and Mary 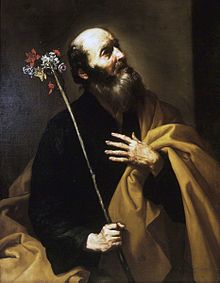 Some statues of Joseph depict his staff as topped with flowers, recalling the non-canonical Protoevangelion's account of how Mary's spouse was chosen by collecting the walking sticks of widowers in Palestine, and Joseph's alone bursting into flower, thus identifying him as divinely chosen. The Golden Legend, which derives its account from the much older Gospel of Pseudo-Matthew, tells a similar story, although it notes that all marriageable men of the Davidic line and not only widowers were ordered by the High Priest to present their rods at the Temple. Several Eastern Orthodox Nativity icons show Joseph tempted by the Devil (depicted as an old man with furled wings) to break off his betrothal, and how he resists that temptation. There are some paintings with him wearing a Jewish hat. - St. Joseph (Wikipedia)

When they were espoused

The Blessed Virgin is called St. Joseph's wife from the moment of their espousal. St. Thomas Aquinas, *Summa Theologica *III q. 29 a. 2 ("Whether there was a true marriage between Mary and Joseph?") co.:

the angel calls Mary the wife of Joseph, saying to him (Mt. 1:20): "Fear not to take unto thee Mary thy wife": on which words Augustine says (De Nup. et Concup. i): "She is called his wife from the first promise of her espousals, whom he had not known nor ever was to know by carnal intercourse."

I'm not a biblical scholar by any means, but my understanding is that in their culture at the time, what we would consider engaged was, in their culture, as binding as being married was. If you remember, in Matthew, when Joseph hears that Mary is pregnant, he thinks of divorcing her quietly so as not to publicly disgrace Mary but an angel tells him not to do that.

I don't know when they would have consummated the marriage, but I think a pregnant woman was considered "unclean", and would have been considered unclean for some time after delivery, so since Joseph would not have touched her until she was ceremonially clean or that would make him unclean.

Not the answer you're looking for? Browse other questions tagged catholicism life-of-jesus virgin-mary joseph-husband-of-mary or ask your own question.

9
What is the origin of the Orthodox belief that Sts. Joseph and Mary were betrothed but not married?

20
What significance, if any, does the doctrine of the eternal virginity of Mary have?
18
When did Mary and Joseph learn that they were never supposed to have marital relations, according to Roman Catholic doctrine?
7
Why didn't Mary tell Joseph what Gabriel had said to her?
7
What did Mary and Joseph do with the gold, frankincense, and myrrh?
4
Why was St. Joseph given instructions in dreams? (Roman Catholic perspective)
12
How could Jesus be descended from the royal line of David if he was born of the Virgin Birth?