What was the 16th century Catholic doctrine on Greek gods?

I've long assumed the Catholics have always denied the existence of pagan gods, hence allowed them to be represented in art as a fiction reminiscent of a heroic and remote past. However, the strong wording in an addendum to the imprimatur (image below) for an early 1572 edition of the Portuguese epic Os Lusíadas from author Luiz de Camões states clearly that Greek gods referred to in the text are demons (Demonios).

This choice of words seems very strange to me. So, the question is: how did 16th century man and Catholic doctrine in particular see Greek/Roman gods? Did they acknowledge their existence as true demons who could bring evil or be invoked by a sorcerer? Or only figuratively in that worshiping a false deity would lead to distance from God and so opening space for demons to act? 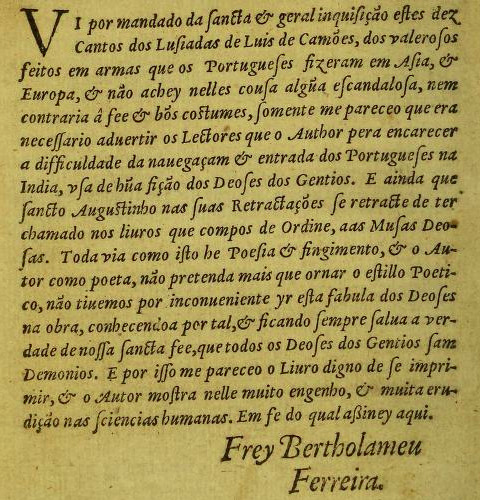 The text says: "By mandate of the Holy Inquisition, I have reviewed those ten chants [...] However, since this is a work of poetry and feigning, and the author, as a poet, has no further intentions than to follow the poetic style, we found no issue with the fable of foreign deities being told in this work. We know it as being such, and we always keep the truth of our holy faith, that all Gods of the Gentiles are demons. And so the book seems to me worthy of publishing and the author evinces in it his great genius and much learning in the human sciences. [...]"

Is this truth he alludes to is part of particularly strict contemporary views on mythology or is a point of doctrine?

The words "all Gods of the Gentiles are demons" is a quote from Scripture;

For all the gods of the heathens are devils, but the Lord made the heavens (Ps. 96:5 LXX/Vul).

It's most likely meaning in Scripture and here is that whereas the heathens think they worship gods, they serve demons in actual fact, either literal individual demons corresponding to the respective false idols/gods, or simply in the fact that they offer sacrifice to not-God (their fictional gods), and take perverted pleasure in such, or can even gain spiritual authority over such who dabble in such.

I think it would first have to be demonstrated (no pun intended) that a change in the perennial view of false gods had taken place in the 1500s (which from this quote alone is not evident), rather than setting about to produce an explicit interpretation of "the gods of Gentiles are devils" by someone in the 1500s wherein they differed therefrom.

Traditionally, the activity of witches etc. qua (as being, or if) actually supernatural, is obviously to be attributed to devils, since it is not God's doing. Does this mean all false gods correspond to an individual fallen angel (devil)? I don't think so. However, the early Church Fathers certainly believed that demons were at least the inspiration for the false religions of pagans, especially those in which there are things which seem to plagiarize the Old Testament, or even imitate something specifically Christian (St. Justin Martyr, a mid-second century Christian, would say that the mysteries of Mithras were plagiarized from the Christian sacrament of the Eucharist):

[The sacrament of the Eucharist] which the wicked devils have imitated in the mysteries of Mithras, commanding the same thing to be done. For, that bread and a cup of water are placed with certain incantations in the mystic rites of one who is being initiated, you either know or can learn.

Much to the gratification of liberals and anti-Christians who consider Christianity 'just another pagan religion.'

Not the answer you're looking for? Browse other questions tagged catholicism history demons mythology or ask your own question.

7
Where was Catholic doctrine defined before the Catechism?
7
According to 21st century Catholic critics, what's so great about the Canticle of the Sun?
15
Why was the New Testament Written in Greek?
5
What is the difference between the Roman Catholic and Greek Orthodox churches?
0
What are demons according to the Catholic Church?
7
Did some Christian sects ever hold the opinion that ritual slaughter was obligatory, before the 10th century?
7
What was the basis for saying that 11th-century Greek churches were “rebaptizing” Latins?
3
Have any Catholics (e.g. Eastern Rite) ever followed the Old Calendar since the late 16th century?
3
Why do Greek Orthodox venerate icons and Roman Catholic statues?
4
What was the impetus for restoring the Consecration of a Virgin in the 20th Century?