The Cross on which Our Savior was crucified seems to be made of pine:

A microscopic examination of the fragments of the Cross scattered through the world in the form of relics reveals the fact that it was made from a pine-tree (Rohault de Fleury, "Mémoire sur les instruments de la Passion", Paris, 1870, 63). According to an ancient, but somewhat dubious, tradition the Cross of Jesus Christ measured in length very nearly 189 inches (4.80 metres), from 90½ to 102½ inches (2.30 to 2.60 metres). As noted by the Evangelists, two thieves were crucified, one on either side of Christ. Their crosses must have resembled the one on which He suffered; in Christian art and tradition they generally appear lower (St. John Chrysostom, Hom. i, xxvi, on I Cor.; on Rom., v, 5). A large portion of the cross of the good thief (traditionally known as Dismas) is preserved at Rome in the altar of the Chapel of the Relics at Santa Croce in Gerusalemme. - The crucifixion of Jesus Christ (Catholic Encyclopedia)

There are no exact figures available as to what the Cross truly weighed, but tradition is that Jesus only carried the heavy patibulum, the crossbar to the place of crucifixion.

In John 19:17, John says Jesus carried the cross while in Matthew 27:32, Mark 15:21 and Luke 23:26 we are informed that Simon of Cyrene helped Jesus to carry the cross. There are no exact figures on the weight of the cross. It is believed to have been made of solid wood , so the whole cross is estimated to be over 300 pounds (136 kilograms) while the crossbar is estimated to be around 70-90 pounds (32-41 kilograms). - What is the weight of the cross that Jesus carried?

The episode is mentioned, without much detail, in all the canonical Gospels: Matthew 27:31–33, Mark 15:20–22, Luke 23:26–32 and John 19:16–18. Only John specifically says Jesus carried his cross, and all but John include Simon of Cyrene, who was recruited by the soldiers from the crowd to carry or help carry the cross. Modern scholars, following descriptions of criminals carrying crossbars by Plautus and Plutarch, often take the Gospel description as meaning Jesus, then Simon, carried only a heavy patibulum, the crossbar, to a pole, stipes, which was permanently driven into the ground at Golgotha. However, in Christian imagery Jesus, and Simon, carry the complete cross—both patibulum and stipes. - Christ Carrying the Cross 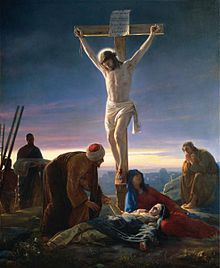 Christ at the Cross by Carl Bloch, painting c. 1870

Many Catholics hold that Our Lord's Cross was low to the ground as the above painting suggests and that He was pierced with a lance and not a spear as is commonly displayed in many Crucifixion scenes.

The lance (Greek: λόγχη, lonkhē) is mentioned in the Gospel of John (19:31–37), but not the Synoptic Gospels. The gospel states that the Romans planned to break Jesus' legs, a practice known as crurifragium, which was a method of hastening death during a crucifixion. Just before they did so, they realized that Jesus was already dead and that there was no reason to break his legs. To make sure that he was dead, a Roman soldier (named in extra-Biblical tradition as Longinus) stabbed him in the side.

One of the soldiers pierced his side with a lance (λόγχη), and immediately there came out blood and water. — John 19:34

Three types of crosses commonly used by the Roman army

Pictured are three types of crosses commonly used by the Roman army in the first century A.D. Each carried an inscription stating the victim's capital offense and a seat-like projection, not designed for the victim's comfort, but to prolong their agony. Nails and ropes held the victim's legs and arms in place.

The cross on the left was called a “high tau” cross because it was shaped like the capital Greek letter tau (“T”). The middle cross was known as a “low tau” cross, shaped like the lower case tau (“t”). In both cases the central post was generally set permanently in the ground while the cross bar was carried to the site by the victim. The cross on the right was an actual tree still in the ground (dead or alive) with its limbs serving as the cross bar. Jesus was probably crucified on a “low tau” type cross. - What kind of cross was Jesus crucified on?

A Doctor at Calvary: The Passion of Our Lord Jesus Christ as Described by a Surgeon by Pierre Barbet M.D. to those who genuinely desire what the physical sufferings Our Lord went through in his Crucifixion. It is not for the squeamish.

Another Doctor at Calvary What does medicine tell us about the Passion of Our Lord? Thomas McGovern, MD

Not the answer you're looking for? Browse other questions tagged catholicism life-of-jesus cross .

2
What does modern scholarship conclude about the shape of the cross and the method of crucifixion?

1
Did Jesus suffer on the Cross in all possible senses?
9
Did Jesus die on the cross or on the tree?
6
According to Catholicism, does intelligence or rationality belong to other animals by participation?
9
Did all Popes use the inverted cross?
2
How much time did Jesus spend in Gethsemane?
8
How was the term 'The Cross' understood by the audience of Jesus? (Catholic perspective)
0
Were Jesus’ hands tied on the way to Calvary?
1
According to Catholic Church, is there a deeper meaning in the saying of Jesus in Lk 23:31?
7
What is the basis for Catholics believing Jesus fell three times (or seven) on his journey to Calvary?