Questions about this icon of Saint Sophia

Below is an icon of Saint Sophia and her three daughters (Faith, Hope, and Charity). It's so cute! I hope someone who is knowledgeable about iconography can answer a couple questions I have about it. 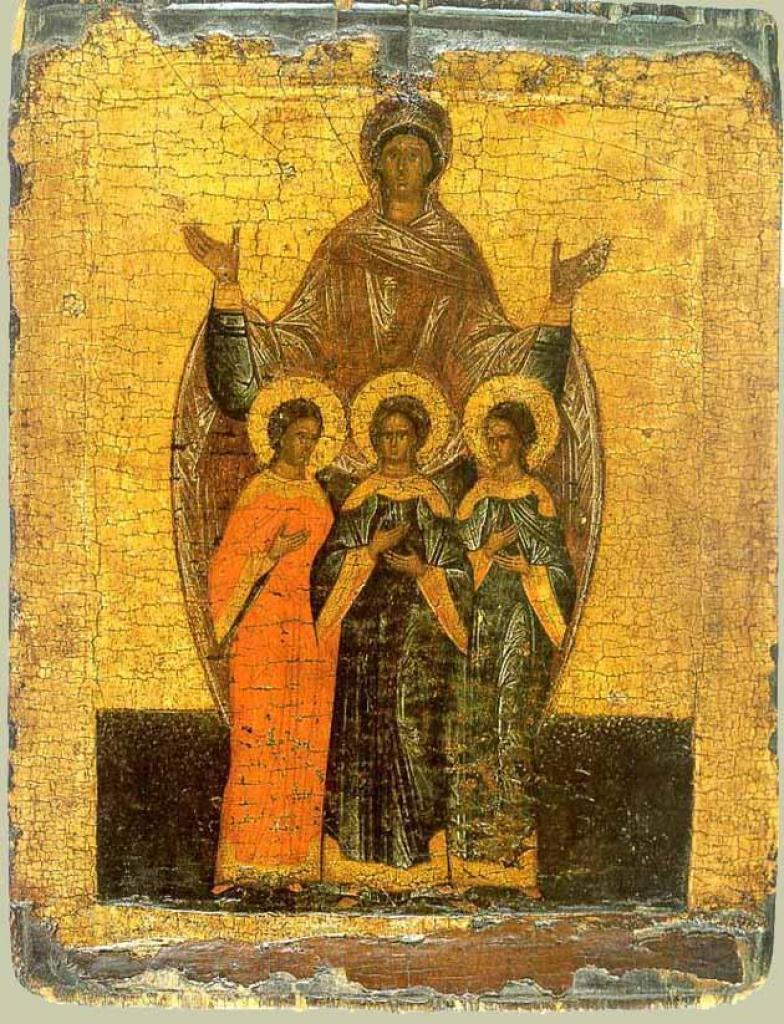 Here is another icon of St. Sophia and her three daughters St. Faith, St. Hope and St. Charity: 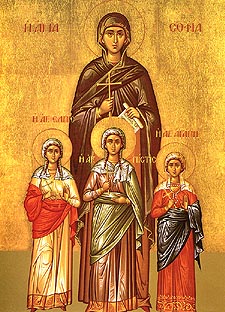 Martyr Sophia and her three daughters at Rome

There are a wide variety of icons of St. Sophia with her three saintly daughters as your link points out.

Even the Supreme Court of the United States follows this tradition:

For the most part, the day-to-day activities of the justices are governed by rules of protocol based upon the seniority of justices. The Chief Justice always ranks first in the order of precedence—regardless of the length of his or her service. The associate justices are then ranked by the length of their service. The chief justice sits in the center on the bench, or at the head of the table during conferences. The other justices are seated in order of seniority. The senior-most associate justice sits immediately to the chief justice's right; the second most senior sits immediately to his left. The seats alternate right to left in order of seniority, with the most junior justice occupying the last seat.

The more ancient icons of St. Sophia and her daughters would definitely follow this order even when the daughters of St. Sophia are not named and appear to be of the same height. Modern artists may not follow this tradition way of placing saints in an icon. But the icon you posted is of a certain antiquity and St. Sophia's daughters are from left to right: St. Hope, St. Faith and St. Charity.

St. Sophia's daughters are not wearing veils in your icon but their heads are surrounded with golden halos. In iconography the color gold represents the presence of God.

Not the answer you're looking for? Browse other questions tagged catholicism eastern-orthodox saint art iconography .

11
Why does a beheaded saint have the halo above the stump?
9
In Eastern Orthodoxy, how is an icon recognized as inspired?
4
Identifying a Saint on a Greek icon?
14
Who is this Saint?
5
What is this icon that Putin touches/kisses at monument of St.Vladimir?
2
Explanation of Russian assorted saints and festivities icon "Plenka"
5
Christ and the Believer Icon (Companion Icon) origin?
4
Who are the people depicted in Dionisius' famous icon of Christ's descent into hell?
4
Identifying Saints in Icon