Is Christianity evolved from shamanism? [closed]

Latest researches show with an abundance of evidence, that modern religion (including Christianity) are evolved from primordial believes system as a reflection of its social and political structure. Following this concept, one could draw an evolutionary tree (in the attached picture) that would depict Christianity (and other modern religions) as a descendant of shamanism.

In practice, it is argued that religion is a product of human society, evolved over time, and not a product of divine intervention. How would you object to this thesis? 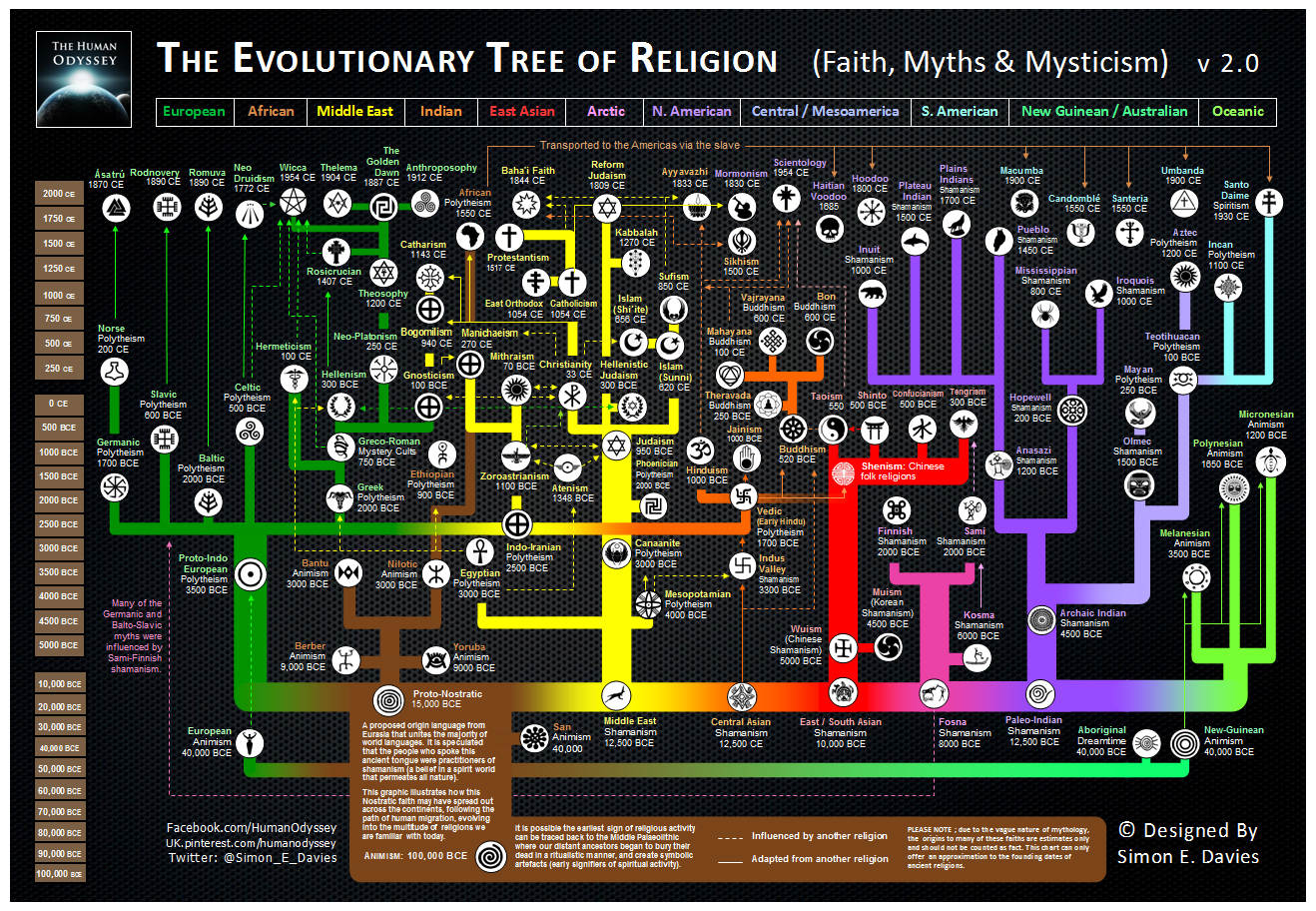 In practice, it is argued that religion is a product of human society, evolved over time, and not a product of divine intervention.

Also, drawing a diagram is not an argument. Anyone who presents this diagram as an argument against religion needs to explain its assumptions, what evidence backs it up, and why they think what it depicts is actually the case.

(Incidentally, the diagram is somewhat oversimplified even from a secular comparative religion point of view. Academic studies would show some more complex interactions.)

I am by no means an academic, but I'll attempt to give my opinion on the matter.

The paper which you referenced in question concludes that, contrary to previously accepted theories, belief in God did not develop from animism or shamanism:

The majority of traits of religion we investigated exhibit a correlated pattern of character change on phylogeny. The results suggest that belief in an afterlife, shamanism, and ancestor worship evolve in concerted fashion as an integrated system of beliefs and practices. However, neither high gods nor active high gods exhibit correlated evolution with the rest of the religious traits, including ancestor worship, despite Spencer’s and Tylor’s suggestions.

The paper does not attempt to explain how belief in God developed, but does note that other papers attempt to link belief in God to various social and political structures. These papers seem to only describe correlations between the two, but it has been well established that correlation does not equal causation. I would argue that academic research on this topic is far from settled and should not be taken as definitive.

But again, I am not an academic, scholar or expert on this topic; this is just my perspective on the matter.

The Bible is an extensive record of about two thousand years of religious history, from Abraham to the life of the last Apostle, John, plus highlights of the time going back to Adam. One approach to comprehending all the changes that occurred over that period is called Dispensationalism. Dispensational doctrinal systems attempt to answer the question: If God is unchanging, then why do some ancient laws and customs that He laid down for people (such as the Jews) to follow endure while others have been replaced or modified? According to the various dispensational views, you have this view of the development and change of religion over time:

1) Some changes are due to cultural drift, invasion (by Assyria, Babylon), syncretism with neighboring peoples (like the Canaanites), corrupt kings (most of them!) or the influence of false prophets (like the Baal worshipers that Elijah fought). The Bible shows how these practices were forcefully opposed and ultimately rejected.

2) Some changes are due to additional revelation from God. These changes are remarkably consistent with what was revealed before.

3) Some changes introduce a New Covenant or a dramatic change in the mode of worship, such as with Noah, Moses, David, and Jesus. The important thing here is that such changes are foreshadowed by the prophets. As it says in Amos 3:7, “Truly the Lord GOD will do nothing he has mentioned without revealing his purposes to his servants the prophets." The reliability and great number of fulfilled prophecies is what set Judaism and Christianity apart from other religions.

So I would say that Christianity stands apart from other changeable human religions in that its changes were planned by God and announced in advance, while still preserving much continuity. For example, if I read about the ethics practiced by Job, a man who lived almost 4,000 years ago, I see nothing objectionable or foreign or outdated in his beliefs. Indeed, Job, a Gentile, prophesies the creation of an authoritative book collecting God's oracles to man, he prophesies Jesus walking on water, refers to his savior as the "Son of Man", lists dozens of other historical events later found in the Bible, and even describes the beasts that figure prominently in the Book of Revelation.

Christianity is not like religions of human origin. As it says in 1 Thessalonians:

Not the answer you're looking for? Browse other questions tagged early-church .

14
Why didn't Syriac Christianity keep Aramaic as their liturgical language?
0
Historical evidence for a separate Jewish branch of Christianity?
1
Ancient Western Christianity & Indian Christians
4
What denominations of Christianity forbid meat from strangled animals?
11
Were any of the early church leaders Gentile converts to Christianity?
2
Information on how the early Christians prepared and/or fled from the destruction of Jerusalem?
1
Did the idea of humans being hard-wired for God exist in late antique Christianity?
2
Was there ever a period in Nascent Christianity before formalized ritual or dogma?