In this video, the priest says that Memento Mori is an integral part of Christianity. He says that priests and nuns used to place skulls on their desks to remind them of their impending death. I have few problems with that:

What does the Catholic Church has to say about that?

As for the skull on the desk, I think Father Schmitz is probably referring to something that I started on Twitter. I keep a skull on my desk (ceramic) to remind me of my death and started tweeting about it last year. The founder of my religious order, Blessed James Alberione, also keep one on his desk (also not real) to remind him of his inevitable death. I have found evidence of a couple other people in the history of the Church who kept skulls on their desks as a memento mori. Pope Alexander VII commissioned a marble skull from Bernini to keep on his desk. Saint John Fisher reportedly kept a skull on his desk and his table when he ate. If real skulls were ever used to meditate on death, I assume they were kept respectfully as relics and not used as mere props. Today, keeping a real human skull on one's desk definitely would not be appropriate according to Catholic teaching as human remains should be buried.

Wikipedia has this to say about Momento Mori:

Memento Mori is the medieval Latin Christian practice of reflection on mortality, especially as a means of considering the vanity of earthly life and the transient nature of all earthly goods and pursuits. It is related to the ars moriendi ("The Art of Dying") and similar Western literature. Memento mori has been an important part of ascetic disciplines as a means of perfecting the character by cultivating detachment and other virtues, and by turning the attention towards the immortality of the soul and the afterlife.

The thought was then utilized in Christianity, whose strong emphasis on divine judgment, heaven, hell, and the salvation of the soul brought death to the forefront of consciousness.[11] All memento mori works are products of Christian art.[12] In the Christian context, the memento mori acquires a moralizing purpose quite opposed to the nunc est bibendum (now is the time to drink) theme of classical antiquity. To the Christian, the prospect of death serves to emphasize the emptiness and fleetingness of earthly pleasures, luxuries, and achievements, and thus also as an invitation to focus one's thoughts on the prospect of the afterlife. A Biblical injunction often associated with the memento mori in this context is In omnibus operibus tuis memorare novissima tua, et in aeternum non peccabis (the Vulgate's Latin rendering of Ecclesiasticus 7:40, "in all thy works be mindful of thy last end and thou wilt never sin.") This finds ritual expression in the rites of Ash Wednesday, when ashes are placed upon the worshipers' heads with the words, "Remember Man that you are dust and unto dust you shall return."

The most obvious places to look for memento mori meditations are in funeral art and architecture. Perhaps the most striking to contemporary minds is the transi or cadaver tomb, a tomb that depicts the decayed corpse of the deceased. This became a fashion in the tombs of the wealthy in the fifteenth century, and surviving examples still create a stark reminder of the vanity of earthly riches. Later, Puritan tomb stones in the colonial United States frequently depicted winged skulls, skeletons, or angels snuffing out candles. These are among the numerous themes associated with skull imagery.

The danse macabre is another well-known example of the memento mori theme, with its dancing depiction of the Grim Reaper carrying off rich and poor alike. This and similar depictions of Death decorated many European churches.

Memento mori was the salutation used by the Hermits of St. Paul of France (1620-1633), also known as the Brothers of Death. It is sometimes claimed that the Trappists use this salutation, but this is not true.

Not all traditions are quite so seemingly morbid in dealing with death. It could be noted that Carthusians have the tradition of intoning and singing the great "Easter Alleluia" at the moment of death of one of their monks.

Keeping death before one's eyes is a tradition that goes back centuries.

A long-standing Christian tradition recognizes the powerful spiritual value in remembering one’s death in order to live well. The Rule of Saint Benedict, written in the 6th century, includes the imperative to “keep death daily before one’s eyes.” As the Catechism points out, both Scripture and the teachings of the Church remind us of “the responsibility incumbent upon man to make use of his freedom in view of his eternal destiny”.

The practice of remembering that you will die helps you to keep in mind that your life will end, and that it has a goal: heaven.

Visual reminders — often called memento mori, the Latin phrase for “Remember that you will die” — are one way we can keep our impending death in mind. Saints Jerome, Aloysius, and Mary Magdalene, among others, are often depicted in classic paintings with skulls. Saint Francis of Assisi once signed a blessing to Brother Leo with the tau cross and a small drawing of a skull. Pope Alexander VII commissioned Italian artist Bernini to make a coffin that he kept in his bedroom along with a marble skull for his desk to remind him of the brevity of life. Blessed James Alberione, the founder of the Daughters of Saint Paul, also kept a skull on his desk. - Memento Mori: How a skull on your desk will change your life

Many catholic works of art show a skull and sometimes accompanied with crossed bones, whether the individual saint actually did so or not. In modern days this would certainly not be permitted as Canon Law forbids it. Human remains must be buried.

Writing a few years after St Paul, St Mark the Evangelist gave an enigmatic detail about the death of Jesus: ‘They brought Jesus to the place called Golgotha, which means the place of the skull’ (Mark 15:22).

The Vulgate translated ‘place of the skull’ as ‘Calvariæ,’ from which we get the name Calvary.

Christian legend and traditions sought to interpret and understand the scriptures and everything to do with the death of Jesus was given great importance. A place name obviously mattered, so what was the significance of Golgotha? The place of the skull? Whose skull?

Concerning the place of the skull, it came to me that Hebrews hand down (the tradition that) the body of Adam has been buried there; in order that ‘as in Adam all die’ both Adams would be raised and ‘in Christ all will be made alive.’

Despite St Jerome’s opinion that this tradition was ‘doubtful,’ it came to be the accepted Christian wisdom: Jesus was crucified in the same place that Adam, or at least the skull of Adam, was buried. This fitted beautifully with the developing ‘Adamic Christology’ which interpreted Jesus as making right through the Redemption all the things that came to pass through Adam and the Fall. - Crucifixes with Crossbones 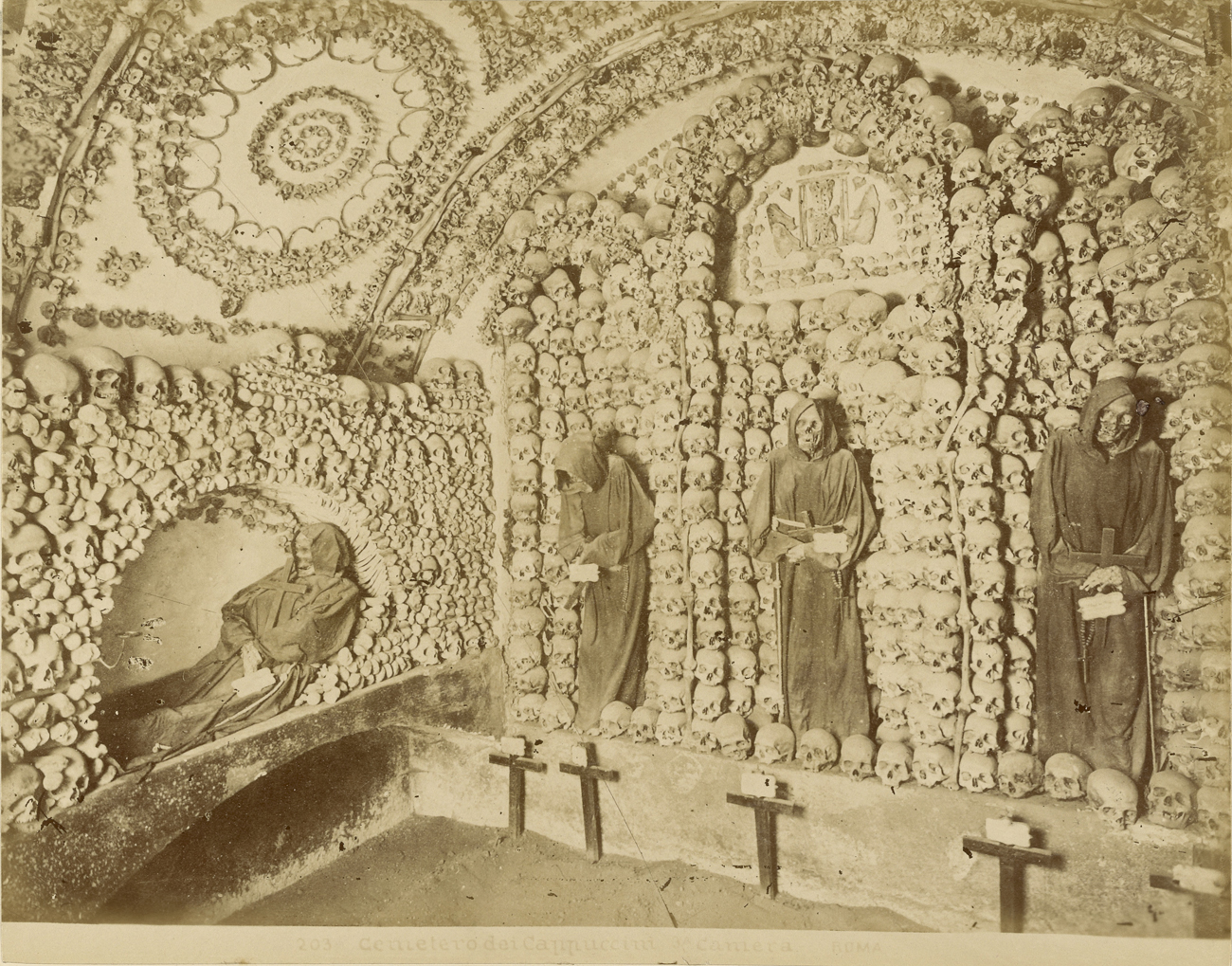 If the message of this reburial-as-artwork was not clear, it is written into the floor of the final crypt, beneath the child’s skeleton: “What You Are, We Once Were, What We Are, You Will Be.” Memento mori. Remembrance of death. Be a good Christian, before it’s too late.

As horror-filmic as the Capuchin ossuary chapels in Rome may sound, the creepiness of moving through them is cut by a cocktail of beauty (in the careful, aesthetic arrangement of this walk-through sculpture, for which bones happen to be the medium instead of wood or marble), tenderness (the hands of the friars who placed and fastened each component), and the sublime (the sweeping knowledge that death conquers all). For those who can’t walk these bone-covered crypts, memento mori can be appreciated on a much smaller scale—a single skull in some of the West’s greatest artworks. - How the Skull Is an Ally in Art

St. Jerome and other saints have done this: 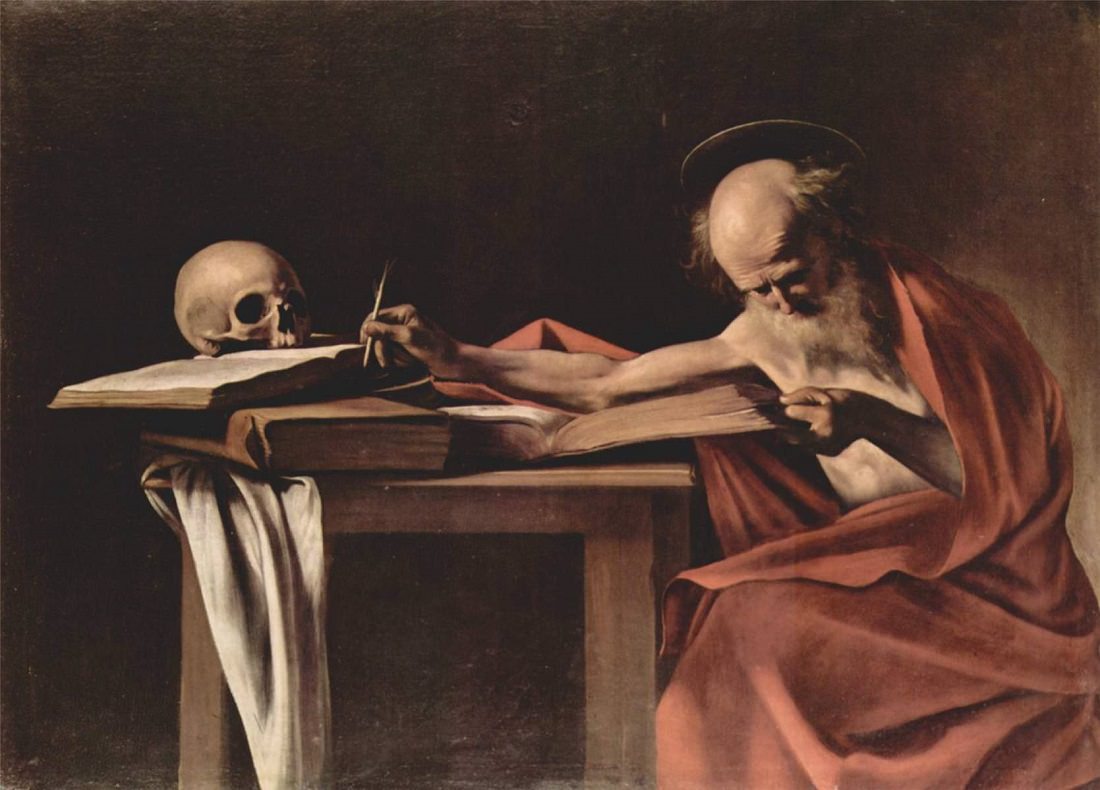 Not the answer you're looking for? Browse other questions tagged catholicism death historic-customs .