Was the tabernacle ceiling straight or pointed?

Which image describes the Tabernacle ceiling or roof as mentioned in the Book of Exodus, and what verse explains that? Was it straight or pointed? 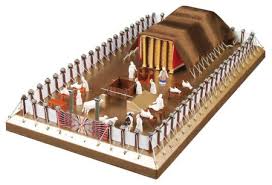 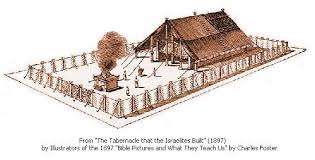 Or 3 (straight from inside, with a covering pyramid like layer around it?):

According to the details in Exodus 26:15-30, it seems like the overall structure of the Tabernacle of Moses was covered with a flat roof. Whether there was an inner curtain that formed a pointed ceiling underneath the flat roof (because a ceiling is found below a roof), I could not say.

Both the NIV and ESV Study Bible diagrams show the Tabernacle Tent (which housed both the Holy Place and the Most Holy Place) with a flat roof. The NIV and the NLT confirm that the upright frames were locked together with horizontal crossbars to form a three-sided rectangle with an open end.

I’m going with your first image.

Not the answer you're looking for? Browse other questions tagged exodus moses tabernacle or ask your own question.

14
What was inside the Ark of the Covenant?
7
What is the historical Christian view on the rebuilding of David's Tabernacle?
24
How did the livestock of the Egyptians die twice?
12
How was Moses able to speak to over 600,000 people at once?
9
Why was God so specific about how to make the Tabernacle?
2
Was everyone who worked on the tabernacle given the Spirit?
2
Where did the priests who served the Lord in Shiloh live?