Of what date is the oldest inscription of Yahweh found?

Is it true that there is an inscription of Yahweh found that is older than when Moses was revealed the name of God in the Bible?

Tradition holds that Moses lived sometime around the 15th century B.C. This would put the oldest use of the tetragrammaton (the Hebrew word "YHWH", anglicized to "Yahweh") to the same time frame, as Moses wrote the oldest portions of the Bible.

Outside the Bible, the oldest known inscription of the tetragrammaton appears on the Mesha stele, which has been dated to around 840 B.C. You can read more about the Mesha stele here.

When God commissioned Moses from the burning bush in the wilderness, when Moses asked God his name he was given the name of Yahweh, Exodus 3:13-14:

If the 480 years in 1 Kings 6:1 is taken literally then the appearance of God to Moses at the burning bush was either late 1447 or early 1446 bc before the spring equinox. The name "Yahweh" originates with this name "I AM THAT I AM".

The oldest inscription containing the name Yahweh is the Soleb Inscription in Sudan. It dates to the reign of Amenhotep III who reigned 1415-1377 (High Chronology). It is therefore at most only 70 years after the date of the giving of the name to Moses.

On the inscription the pharaoh names his enemies to the south of Egypt in one section of writing and his enemies to the north on another section of writing. The relevant section is in the enemies to the north of Egypt. One of his enemies are in "The land of the Shasu of Yahweh". Shasu means "nomads" or maybe "those who move on foot". When the inscription was produced the Israelites were either still "nomads" in the Sinai wilderness or had recently entered the Promised Land. The wanderings in the wilderness ended in the spring of 1406 bc. 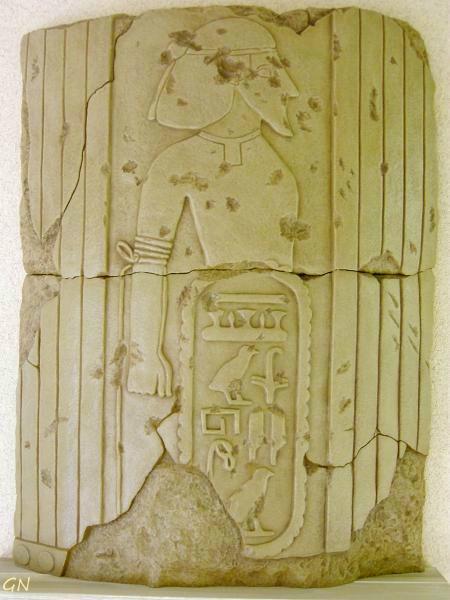 The Soleb Inscription of Amenhotep III

On the inscription inside the cartouche, the top most symbol which just looks like a long thin rectangle means "land"; the next symbol which looks like another rectangle with three large trees and two smaller trees, together the "f" sign with the bird to its left means "Shasu"; and the two leaves, with a house symbol, a noose and the bird at the bottom together mean "Yahweh".

About this inscription archaeologist Donald B. Redford, a secular scholar, wrote:

"For half a century it has been generally admitted that we have here the tetragrammaton, the name of the Israelite god “Yahweh”; and if this be the case, as it undoubtedly is...."

We read in scripture:

Afterwards Moses and Aaron went in, and told Pharaoh,

"Let my people go, that they may hold a feast unto me in the wilderness".

And Pharaoh said "Who is Yahweh that I should obey his voice?"

According to the Bible chronology this was Amenhotep II and the year was 1446 bc. By the reign of Amenhotep III the Egyptians clearly knew who Yahweh was, the God of the Shasu, their nomadic enemies, to the north east of Egypt. For more on who was the Pharaoh of the Exodus see Who was Pharaoh when Moses lived in Egypt?

Another inscription naming Yahweh is also in the Sudan at Amarah West and was produced either in the reign of Sety I or Rameses II. It is thus the second oldest Yahweh inscription.

For more on the Soleb Inscription hear this message from Joel Kramer:- https://clairemontemmanuel.podbean.com/e/the-oldest-yahweh-inscription-joel-kramer-archeologist-august-19-2018/

In a tomb at Ketef Hinnom in Israel, the oldest text of the Hebrew Bible was discovered. The text, inscribed on a silver scroll in the old Hebrew script dating to the 7th Century B.C., is the Aaronic blessing (Numbers 6:24-26), which begins, "yeverekh'kha YHWH Vayishmarekha" (May Yahweh bless you and keep you). Source: http://ancient-hebrew.org/bible_manuscripts.html

The oldest known inscription of the Tetragrammaton dates to 840 BCE, on the Mesha Stele. It bears the earliest certain extra-biblical reference to the Israelite God Yahweh. The most recent discovery of a Tetragrammaton inscription, dating to the 6th century BCE, was found written in Hebrew on two silver scrolls recovered from Jerusalem. Source: https://en.wikipedia.org/wiki/Tetragrammaton

You may find it helpful.

Not the answer you're looking for? Browse other questions tagged tetragrammaton archaeology or ask your own question.

30
Who was Pharaoh when Moses lived in Egypt?

17
Why does Vatican require “Yahweh” not to be used?
11
Do any Christian traditions intentionally use the name 'Yahweh'?
6
What is the Biblical basis for concluding 'Jesus is Yahweh (Jehovah or LORD)'?
4
Is it true that there is an inscription that says that Yahweh had a wife?
1
Discrepancy between Yahweh (Christian Bibles) and Eh-yeh (Torah)
6
What was the first translation to transliterate the tetragrammaton?
3
Why do most Bible translations bowdlerize the Tetragrammaton?