Why do Catholic churches have a red lamp burning inside?

Is there any significance to the red lamp that is lit inside Catholic churches?

I ask because I recently saw a green lamp lit at the entrance to a Church of Scotland village church and wondered if the lighting of a lamp is common to both Catholic and (some) Protestant churches. Just curious!

The sanctuary lamp or tabernacle lamp signifies that the Blessed Sacrament is present* in the tabernacle.
*cf. Real Presence of Christ in the Eucharist

If it is extinguished,* it signifies there is no Blessed Sacrament the tabernacle.
*(like during the Stripping of the Altar at the end of a Holy Thursday service)

Command the children of Israel that they bring thee the purest oil of the olives, and beaten with a pestle: that a lamp may burn always, in the tabernacle of the testimony, without the veil that hangs before the testimony.

They are placed by the tabernacle 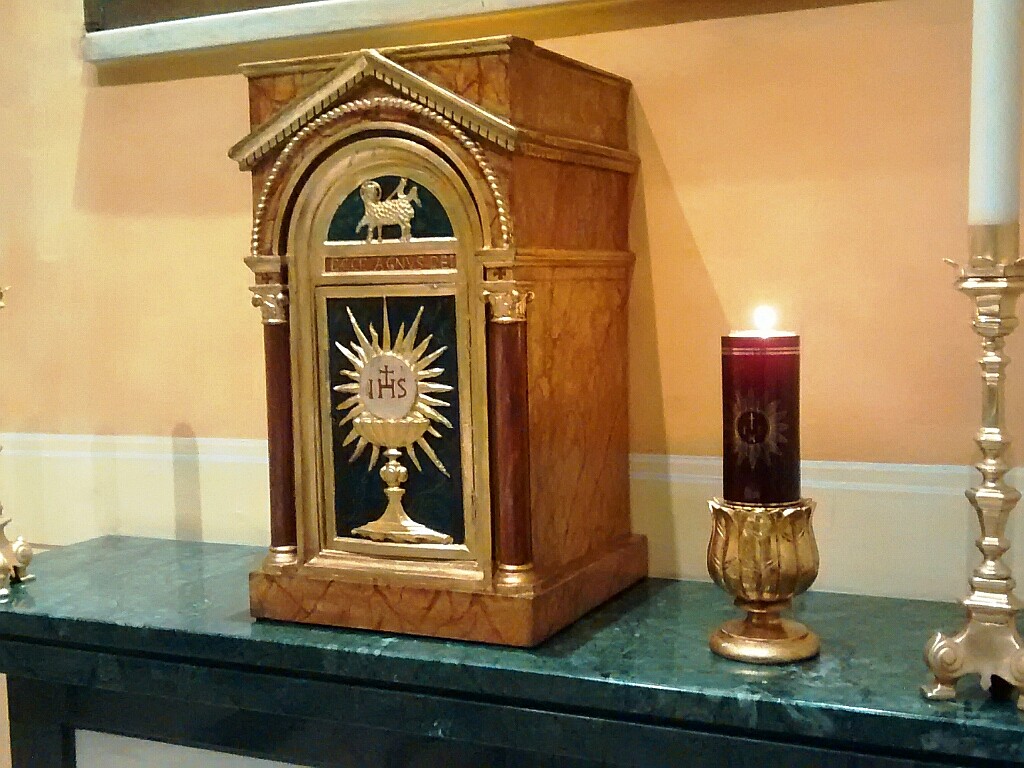 or hung on a wall of the sanctuary: 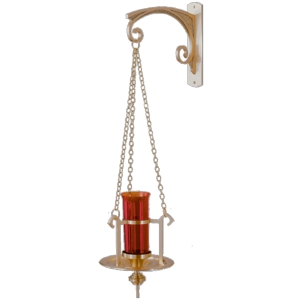 From Rev. William A. O'Brien's Sacristan's Manual for the Extraordinary Form:

THE SANCTUARY LAMP. This lamp usually hangs in the center of the sanctuary before the tabernacle. It must be kept burning day and night. This is a strict obligation and the sacristan should see that the lamp is ever ready to fulfill its purpose.

The Code of Canon Law of the Catholic Church states:

Can. 940 A special lamp which indicates and honors the presence of Christ is to shine continuously before a tabernacle in which the Most Holy Eucharist is reserved.

By early 20th century there were plenty of regulations regarding this light (e.g. the type of fuel to be used), but there seem to have been no restriction on the colour of the light. Below is the full text of the entry on the altar lamp in the 1907's Catholic Encyclopedia (from here):

In the Old Testament God commanded that a lamp filled with the purest oil of olives should always burn in the Tabernacle of the Testimony without the veil (Exodus 27:20, 21). The Church prescribes that at least one lamp should continually burn before the tabernacle (Rit. Rom. iv, 6), not only as an ornament of the altar, but for the purpose of worship. It is also a mark of honour. It is to remind the faithful of the presence of Christ, and is a profession of their love and affection. Mystically it signifies Christ, for by this material light He is represented who is the "true light which enlighteneth every man" (John 1:9). If the resources of the church permit, it is the rule of the Caerem. Episc. (1, xii. 17) that more than one light should burn before the altar of the Blessed Sacrament, but always in uneven numbers, i.e. three, five, seven, or more. The lamp is usually suspended before the tabernacle by means of a chain or rope, and it should hang sufficiently high and removed from the altar-steps to cause no inconvenience to those who are engaged in the sanctuary. It may also be suspended from, or placed in a bracket at the side of the altar, provided always it be in front of the altar within the sanctuary proper (Cong. Sac. Rit., 2 June, 1883). The altar-lamp may be made of any kind of metal, and of any shape or form. According to the opinion of reputable theologians, it would be a serious neglect, involving grave sin, to leave the altar of the Blessed Sacrament without this light for any protracted length of time, such as a day or several nights (St. Lig., VI, 248). For symbolical reasons olive oil is prescribed for the lamp burning before the altar of the Blessed Sacrament, for it is a symbol of purity, peace, and godliness. Since pure olive oil, without any admixture, causes some inconvenience in the average American climate, oil containing between 60 and 65 per cent of pure olive oil is supposed to be legitimate material. Where olive oil cannot be had, it is allowed, at the discretion of the ordinary, to use other, and as far as possible vegetable, oils (Cong. Sac. Rit., 9 July, 1864). In case of necessity, that is, in very poor churches, or where it is practically impossible to procure olive or vegetable oils, the ordinary, according to the general opinion of theologians, would be justified to authorize the use of petroleum. We are of the opinion, however, that there are but few parishes that can claim this exemption on the plea of poverty. Gas (Ephem. Lit., IX, 176, 1895) and electric lights (Cong. Sac. Rit., 4 June, 1895) are not allowed in its stead. The Caerem. Episc. (ibid.) would have three lights burn continually before the high altar, and one light before the other altars, at least during Mass and Vespers. Before the Blessed Sacrament, wherever kept, a lamp should be constantly burning. Our bishops have the power of granting permission to a priest, under certain circumstances, to keep the Blessed Sacrament in his house. In such cases, by virtue of Faculty, n. 24, Form. I, the priest may keep it without a light, if otherwise it would be exposed to the danger of irreverence or sacrilege. For the same reason we believe It may be kept also in the church without a light during the night.

I imagine that after the Second Vatican II some of these restrictions were relaxed. So beware of considering the above as still abiding rules.

The lamp could be of any coulour. It signifies the presence of Holy Eucharist in the Church. Most of the Catholic Churches have at least one door open during the entire day so that the faithful passing by can get in and pay a visit to the Blessed Sacrament, which would not be possible, especially in old churches, if no light was available.

The question about Catholic Church lamps has been well answered already, so this is just to deal with the second part of your question, what you saw in a Church of Scotland Church building.

The only time I've ever seen such a thing was north of Aberdeen, at Macduff Parish Church, Macduff being a fishing village, one of many along that coastal stretch. This was at Harvest Thanksgiving in the early autumn, when a green lamp and red lamp were part of the harvest display, on either side of the pulpit - but it was simply marking port and starboard as a part of the harvest of the sea - very appropriate in a fishing community, but of no particular spiritual significance.

Lamps of any colour, let alone green lamps in the Church of Scotland are not a big thing. They might not even amount to anything! But individual Parish Churches in Scotland have a certain freedom to do things like that, if the Presbytery so decides. Hope this helps with the second part of your question.

Not the answer you're looking for? Browse other questions tagged catholicism protestantism church-building .

19
Why does Catholicism have priests but Protestantism does not?
13
Are there any Protestant beliefs which have their roots in Mormon doctrines?
5
Why are many Protestant Churches not practicing Confession?
4
What is this box that can be found in Catholic churches?
14
Who is the most recent saint recognized by both the Catholic and the Orthodox churches?
6
How does the Catholic Church choose the patron saint of a parish church?
2
Do Protestants think of Mary as the "Mother of All Peoples"?
4
Does the Catholic Church have a policy on how altars are to be destroyed?
2
How common are manifestations of charismatic gifts among saints venerated in Orthodox and/or Catholic Churches?