I was taught that Saint Peter is at the gates of heaven, and you have to pass him to get in. Answers to a recent question suggest this is not true.

This view is based primarily on Matthew 16:18–19, in which Jesus says:

When this concept of "keys" belonging to Peter is combined with the teaching from Revelation 21:12, that the New Jerusalem has walls and gates, it's not a huge leap to see Peter as being the gatekeeper of heaven, who allows entrance to some but not others.

However, this is as explicit as the Bible itself gets on this question. There are a few other sources for Petrine authority, like Matthew 18:18, but the popular image of Peter standing at the pearly gates is a later interpretation or extrapolation of the scriptures. Leading church historian Everett Ferguson identifies a possible source:

The passage [Matthew 16:18–19] moves from a building, to gates, to keys. A popular image has Peter as the doorkeeper of heaven, deciding admission through the pearly gates to each person at death. This understanding of Peter goes back to an early medieval interpretation that identified Peter with a figure in Germanic mythology who was the porter of heaven. (The Church of Christ, 53)

Numerous others make the same connection between the passage and the popular imagery, like Miriam Van Scott in Encyclopedia of Heaven, 208 and Howard Clarke, who ties this imagery to medieval drama (The Gospel of Matthew and Its Readers, 146).

The idea of Peter at the gates of heaven with the keys has a long history that is sourced to the bible. Of course, as things go, sourcing alone and understanding the source may be two different things.

Here is an example of the teaching in the 7th century at the Synod of Whitby over the argument about the Easter observance. (bold mine)

The controversy [Easter] was decided in a Synod held at Whitby in 664 in the presence of King Oswy or Oswio and his son Alfrid. Colman, the second success or of Aidan, defended the Scottish observance of Easter by the authority of St. Columba and the apostle John. Wilfrid rested the Roman observance on the authority of Peter, who had introduced it in Rome, and on the universal custom of Christendom. When he mentioned, that to Peter were intrusted the keys of the kingdom of heaven, the king said: “I will not contradict the door-keeper, lest when I come to the gates of the kingdom of heaven, there should be none to open them.” By this irresistible argument the opposition was broken, and conformity to the Roman observance established. -source-

Previous to this circa CE 200 we find the argument of Tertullian who focuses the giving of the keys on to Peter alone and not to or passed on to the subsequent generations. Peter, he taught, used the keys preaching first to the Jews (Pentecost) and to the Gentiles (Cornelius). It was done once for all. It was not something to be passed on or repeated or needed thereafter. For Tertullian, to hold the keys was to usurp what was given to Peter alone. He then outlines various ways in which Peter already opened the doors.

Whither is he to come who thirsts? Shall he come to the heretics, where there is no fountain and river of living water at all; or to the Church which is one, and is founded upon one who has received the keys of it by the Lord’s voice? -source-

John Cassian wrote about CE 410 about the keys and what it means; that is, the confession of Peter (Jesus is the Christ the Son of the Living God Mat 16:16) is the faith by which the gates are opened.

These historic strands relate back to the biblical recording of Christ giving to Peter the keys to the kingdom. The bible is the source, but understandings vary.

As mentioned, Peter did as Christ commanded. He opened the doors to the kingdom first to the Jews:

But Peter, standing up with the eleven, lifted up his voice, and said unto them, Ye men of Judaea, and all ye that dwell at Jerusalem, be this known unto you, and hearken to my words: ... Then Peter said unto them, Repent, and be baptized every one of you in the name of Jesus Christ for the remission of sins, and ye shall receive the gift of the Holy Ghost. Acts 2:14, 38

And then to the Gentiles.

Then Peter opened his mouth, and said, Of a truth I perceive that God is no respecter of persons: ... While Peter yet spake these words, the Holy Ghost fell on all them which heard the word. Acts 10:34, 44

So, the idea of Peter as the gate keeper is very old. For some, Peter has already done his job. The doors are opened and hell will not prevail. For others, they view Peter or their church still holding the keys and who may or may not open the doors for them.

The Catholic Church Tradition does not teach St. Peter as the "Gate of Heaven" so the most that we are familiar to are the one that Jesus spoke to Peter when Jesus gave Peter the keys to the Kingdom of God and gave him the power to bind and loose in the Gospel of Matthew.

However, the Catholic Church Tradition like the Litany of Loreto teaches that Mary is the "Gate of Heaven".

Mary is also called the "Gate of Heaven," because Our Lord is in Heaven, and She is the way to Him. A holy soul used to say this prayer: O Jesus, in Thy dear Sacrament, Thy Heaven I cannot see. But Heaven is everywhere Thou art, and Thou art Heaven to me.

A gate is the entrance you pass through to get from one place to another. Mary is "the closed gate" of the Prophet Ezechiel, that the prince only could pass through. "This gate shall be closed, it shall not be opened, and no man shall pass through it, because the Lord God of Israel hath entered in by it, and it shall be shut for the prince." (Ezech. 44: 2-3)

As Our Lord came to us through Mary, so must we go to Him through Her. We must think of Mary as the "Gate of Heaven" not only for us, the Church Militant, but also for the Church Suffering—the poor souls in Purgatory, who cannot help themselves. Through Her prayers many a soul may at this very moment be passing through the Gate of Heaven.

There is nothing Our Lady so much wants as our prayers and acts of virtue to enable Her to be the Gate of Heaven to the poor souls in Purgatory, and help Her to deliver them. So let us daily offer Her many aspirations, indulgenced prayers, and acts of self-denial, that by their aid She may deliver poor suffering souls and bring them to Heaven; and then, when our own turn comes, we shall find the "Gate of Heaven" open and the redeemed souls ready and waiting to do the same good turn to us.

Titles of Our Lady from the Litany of Loreto 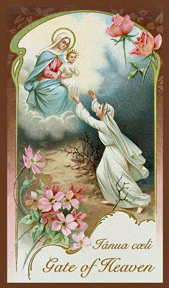 Not the answer you're looking for? Browse other questions tagged biblical-basis heaven judgment peter .

5
What is the biblical basis for all people meeting God when they die?