What particular action that is in excess to God's Permissive Will did Satan commit in the Garden of Eden?

Reading God's judgement on Adam & Eve and Satan would allow us to see and understand that Satan had done something in excess that merited not just a punishment but a "curse".

We can see from the Book of Job, God sets the limits on what Satan was allowed to do.

8 Then the Lord said to Satan, “Have you considered my servant Job? There is no one on earth like him; he is blameless and upright, a man who fears God and shuns evil.”

9 “Does Job fear God for nothing?” Satan replied. 10 “Have you not put a hedge around him and his household and everything he has? You have blessed the work of his hands, so that his flocks and herds are spread throughout the land. 11 But now stretch out your hand and strike everything he has, and he will surely curse you to your face.”

12 The Lord said to Satan, “Very well, then, everything he has is in your power, but on the man himself do not lay a finger.”

Then Satan went out from the presence of the Lord.

We can see from Book of Job, God sets limits to what Satan can do, otherwise as St.Augustine said if God had given Satan a freehand no man shall be alive.

So, back in the Garden of Eden, surely Satan under God's permissive Will had given access to tempt Adam & Eve but the judgment of God implied not just a punishment but a curse towward Satan action, which basing on the Book of Job should not be the case as Satan is clearly instructed on the limits.

God's judgment or the "cursed punishment" goes like this;

So the LORD God said to the serpent: “BECAUSE YOU HAVE DONE THIS, Cursed are you above all livestock, and every beast of the field! On your belly will you go, and dust you will eat, all the days of your life. (Genesis3:14)

My question is, what is the meaning or the so called overly done action does the serpent had committed for God to said the words "BECAUSE YOU HAVE DONE THIS"?

My impression is, if Satan just followed the limits of whatever God's instructions had given to him in tempting Adam & Eve, satan would have not merited a "curse".

I'm looking for a Catholic perspective although a biblical explanations from Christian faith would also be helpful.

No one can ever do anything God does not permit

That is what is meant by God's "permissive" will. God's permissive will exists in cosmologies wherein God's sustaining presence is such that without God's present sustaining action literally nothing would happen. Rocks would not fall, people would not be able to move their arms, the earth may or may not (depending on theologian) continue to possess any sort of physical extent or even exist at all, etc. Literally everything that happens, in this view, must be actively allowed by God because were it not the will of God, permissively, then it could not happen.

Therefore, it is not correct to say that Satan took (or could take) any action God did not or would not permit, but rather and only that Satan did something contrary to the active will of God (viz. the sort of thing God would say He willed/wanted if you asked Him), that is, something which offended God.

Given, then, that there is no sort of 'special' sin being committed here (nor could there be; sin may be greater or lesser in gravity but it is all the same sort of stuff), the apparent difficulty is removed: the 'curse' is no different than any other sort of God-imposed punishment for sin, special in the case of Adam and Eve only in that prior to it they had not yet sinned, and not notable in the case of Satan any more than any other of his multitudinous iniquities. To ask what the 'this' in 'because you have done this' is is merely to ask what Satan did prior to the statement which was morally wrong, which is pretty evident in the text.

Let's consider a different analogy. When Judas set in his heart to betray the Son of God. Jesus said to Judas the following:

And after the sop Satan entered into him [Judas]. Then said Jesus unto him, That thou doest, do quickly. (John 13:27)

In this act, Jesus gave Judas His permissive will, so to speak. However, it does not absolve Judas of his actions. After betraying Jesus, Judas felt the weight of his guilt, he said "I have sinned in that I have betrayed the innocent blood." (Matt 27:4)

So to bring it back to Satan, what it is that he has done to warrant a curse? He has cause the whole human race to sin, and has trapped them under the curse of death.

And what was the purpose this curse? Within this curse is the promise of grace for man, and the plan of salvation, foretelling the ultimate defeat of Satan by Jesus.

And I will put enmity between you and the woman, and between your offspring and hers; he will crush your head, and you will strike his heel.” (Genesis 3:15)

I think that Dark Wanderer answers the specifics about God's will nicely. But in response to your comments, it seems like you are more curious about what was Satan's "sin". Lets look closely at the text!

gen 3:1 Now the serpent was more cunning than any beast of the field which the Lord God had made. And he said to the woman, “Has God indeed said, ‘You shall not eat of every tree of the garden’?”

He asks Eve a question. In this question he purposely mis represents the command of God as being burdensome. As if it were unfair and restrictive. "You cant eat from ANY of these trees??!?"

The Woman responds doing her best to clarify the situation.

She does pretty well, sticking up for God and declaring his previous command, she makes a small mistake in adding that they shall not touch it, which God did not say.

Gen 3:4 Then the serpent said to the woman, “You will not surely die."

This is it. This is Satan's sin. He LIES to Eve, speaking contrary to the Word of God. Purposely deceiving the woman that she should sin agains God, and die.

Exodus 20:16 “You shall not bear false witness against your neighbor.

Satan bore false witness against GOD himself, saying "Has god really said?" causing doubt of his word, and then flat out telling the lie, "You shall not surely die".

Lying is an abomination to God, because he is Truth.

John 8:44 You are of your father the devil, and the desires of your father you want to do. He was a murderer from the beginning, and does not stand in the truth, because there is no truth in him. When he speaks a lie, he speaks from his own resources, for he is a liar and the father of it.

He was a Murderer and a Liar from the beginning, hence his lying to Eve so that she should die from God's curse.

It is Characteristic of Satan to deceive people against God's word.In the hope that they should die from their sins. Even sometimes using the scriptures. You can look at Matt 4 Jesus temptation in the desert to see more.

I hope this helps!

The Quick Answer: Satan was allowed to tempt, but he would have been previously warned that if his temptation succeeded he would be cursed. Because his sin was almost as vicious as the resurrection of Christ was virtuous.

21 And while they were eating, he said, “Truly I tell you, one of you will betray me.” 22 They were very sad and began to say to him one after the other, “Surely you don’t mean me, Lord?” 23 Jesus replied, “The one who has dipped his hand into the bowl with me will betray me. 24 The Son of Man will go just as it is written about him. But woe to that man who betrays the Son of Man! It would be better for him if he had not been born.” 25 Then Judas, the one who would betray him, said, “Surely you don’t mean me, Rabbi?” Jesus answered, “You have said so.”

According to Catholic exorcists, and I'll specifically mention Fr. Ripperger who is the founder of the Order of Traditional Exorcists, demons are allowed to tempt but if they succeed in the temptation they will increase their misery on the last day. The satisfaction is immediate but pain is on schedual.

Regarding as to why Satan was punished immediatly, and a curse is a kind of punishment, instead of being punished later we can find an answer in the gravity of the sin. Satan, by sinning in such a manner, usurped the kingship over this natural world. Because of him, "death entered into the world."(Wisdom 2:24) In other words, the dominion given to Adam and Eve over this world was in part forfeited by Adam and Eve themselves and given to Satan, he became a partaker of this natural world and thus himself was in a sense chained by this contract and punished before the hour just as our first parents were punished immediatly and also later. We of course know that Jesus Christ is also subjected to this natural world, but willingly so, as he can break the chaines if he so desires but does not do so, because God is not a liar nor a cheater. 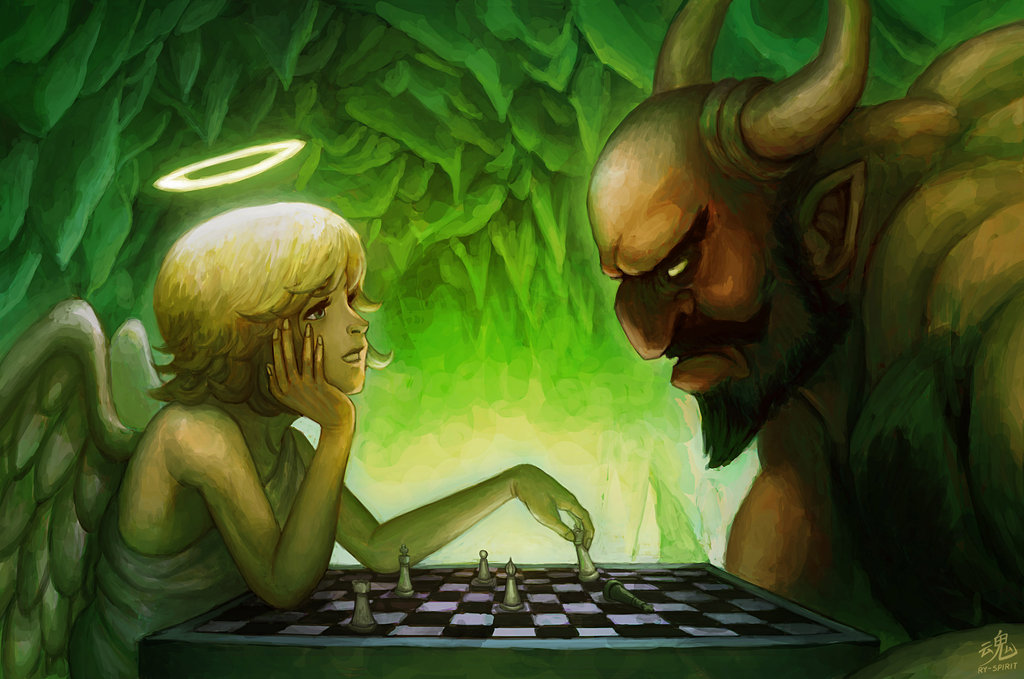 31 Now is the time for judgment on this world; now the prince of this world will be driven out.

18 Then Jesus came to them and said, “All authority in heaven and on earth has been given to me. 19 Therefore go and make disciples of all nations, baptizing them in the name of the Father and of the Son and of the Holy Spirit, 20 and teaching them to obey everything I have commanded you. And surely I am with you always, to the very end of the age.”

29 “Therefore since we are God’s offspring, we should not think that the divine being is like gold or silver or stone—an image made by human design and skill. 30 In the past God overlooked such ignorance, but now he commands all people everywhere to repent. 31 For he has set a day when he will judge the world with justice by the man he has appointed. He has given proof of this to everyone by raising him from the dead.”

We can thus see that this war behaves like a turf war, Satan has been dethroned legally, and now God according to his wisdom is taking back the Earth with Jesus Christ as new Adam and with the Blessed Virgin as new Eve. When in the past the positions were shared between Satan and Adam, and according to tradition Lilith and Eve.

Not the answer you're looking for? Browse other questions tagged catholicism exegesis biblical-basis genesis satan .

5
Are we the result of God's permissive will?