What and where are the evidences for the Catholic Church's Apostolic Succession?

How come there is no evidence issued out by the Vatican that proves their list of Popes that have carried on from Apostle Peter?

I can't find this anywhere and since I can't meet Pope Francis unless I'm Katy Perry or Trump, how would I ever be able to find out about this? I can't really enter the Vatican and ask...

I can't just trust the Vatican by their 'words'. I don't KNOW if they really did come from the line of Peter or not. I can only go by their word. This is not good enough for me. What if they made these people up? So far we can prove St Linus and St Clement existed since they were mentioned by Apostle Paul in the NT but whether they went onto being Arcbishops; we don't know for sure.

How do we know whether the Catholic church is the successor of Peter or the Orthodox church? Since they both claim they are from the line of Peter...

First of all, the Catholic Church admits that both Rome and Antioch(Orthodox) have a line of succession starting with St. Peter.

Speaking of the apostolic succession of Antioch, the Catholic Encyclopedia says :

Second of all, the Orthodox Church, which is not in union with the Catholic Church, also admits that both Antioch and Rome have St. Peter as their first Bishop.

After the Ascension, the apostles dispersed to preach Christianity to the world. They each founded different patriarchates. Some of the most prominent disciples of Jesus founded the patriarchates that made up the Pentarchy.

Third of all, the Orthodox Church has always recognized that technically speaking Rome is superior to all of their churches in view of the Pentarchy. The only reason they go off the rails so to say is that, in a spirit of contradiction, they excommunicated the primate when he disagreed with them.

The Orthodox attitude to the Papacy is admirably expressed by a twelfth-century writer, Nicetas, Archbishop of Nicomedia :

My dearest brother, we do not deny to the Roman Church the primacy amongst the five sister Patriarchates; and we recognize her right to the most honourable seat at an Ecumenical Council. But she has separated herself from us by her own deeds, when through pride she assumed a monarchy which does not belong to her office … How shall we accept decrees from her that have been issued without consulting us and even without our knowledge? If the Roman Pontiff, seated on the lofty throne of his glory wishes to thunder at us and, so to speak, hurl his mandates at us from on high, and if he wishes to judge us and even to rule us and our Churches, not by taking counsel with us but at his own arbitrary pleasure, what kind of brotherhood, or even what kind of parenthood can this be? We should be the slaves, not the sons, of such a Church, and the Roman See would not be the pious mother of sons but a hard and imperious mistress of slaves.’

Wikipedia relates to us that : Pentarchy (from the Greek Πενταρχία, pentarchía, from πέντε pénte, "five", and ἄρχειν archein, "to rule") is a model of Church organization historically championed in the Eastern Orthodox Church. It found its fullest expression in the laws of Emperor Justinian I of the Byzantine Empire. In the model, the Christian church is governed by the heads (patriarchs) of the five major episcopal sees of the Roman Empire: Rome, Constantinople, Alexandria, Antioch, and Jerusalem.[2]

The greater authority of these sees in relation to others was tied to their political and ecclesiastical prominence; all were located in important cities and regions of the Roman Empire and were important centers of the Christian Church. Rome, Alexandria and Antioch were prominent from the time of early Christianity, while Constantinople came to the fore upon becoming the imperial residence in the 4th century. Thereafter it was consistently ranked just after Rome.

In other words, both Catholics and Orthodox believe the Pope is the successor of St. Peter. The difference being that Rome makes the difference between mere succession and the dispensation of the keys which would be considered final and most important succession. Therefore you cannot assume there is a bias in the lines of succession. By the way, Orthodox believe that the Bishop of Rome is the original Primus Inter Pares, a title of primacy which has now been usurped by Constantinople, although if unity is regained Constantinople will lose the title :

The Eastern Orthodox Church also uses the term "first among equals" in regard to the Bishop of Rome during the first thousand years of Christianity.[4] 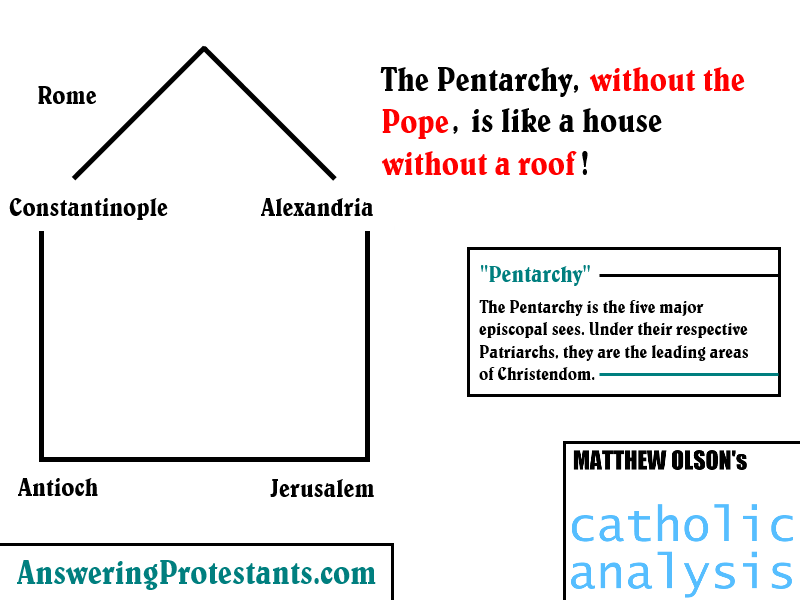 Lastly, the list of Roman Bishops can be found easily but if you want to verify the validity of every individual instance of succession you'll obviously need to consult more precise ressources, like the Catholic Encyclopedia for all the instances of succession.

Not the answer you're looking for? Browse other questions tagged catholicism papacy apostolic-succession eastern-catholicism or ask your own question.

5
Apostolic Succession in the Catholic church
9
Is there any tradition that argues for prophetical succession under the Old Testament just like some argue for Apostolic succession?
27
For Catholics who object to Vatican II, what are the key issues?
12
How has apostolic succession been “unbroken” in the wake of depositions, antipopes, immorality, and simony?
6
Does a comprehensive list for apostolic succession exist?
5
What is the current stance of the Catholic Church regarding the legality of non-Catholic religions?
4
Can a pope name his successor?
3
Evidence that Peter alone was made a Bishop by Christ?
5
What does it mean when Archbishop Ganswein stated that Pope Benedict XVI expanded the Petrine Ministry?