What is the oldest surviving photograph of someone who was later canonized as a saint?

Photography is a relatively recent invention, and as such, the appearances of the majority of saints have only been captured in portraits, icons, and other constructed media.

What is the oldest surviving photograph of someone who was later canonized as a saint?

St. Bernadette Soubirous (1844-1879), the Lourdes visionary, is the first saint of Ann Ball's Modern Saints: Their Lives and Faces to feature a photograph: 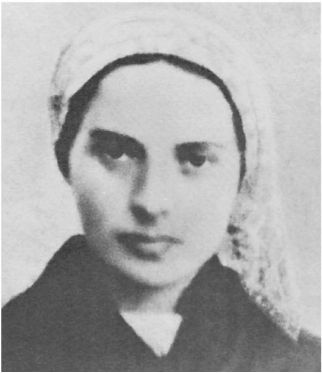 Bernadette was photographed often and her pictures were sold everywhere; she joked, "I am on sale for [ten cents] at every street corner!"

The photograph above was taken at some point in the 1860s.

St. John Vianney could have been the oldest, but

During his lifetime, the Curé d'Ars has always refused to pose for a portrait or to be photographed. In the absence of such a testimony of the physical reality of the saint, one could legitimately wonder about the fidelity of the many images representing him. This uncertainty led, in [September] 1959, the Sacerdotal Session, on the occasion of the centenary of his death, to ask the divisional commissioner Chabot to make a "robot photo" of the Curé of Ars from various documents presenting a scientific certainty, essentially the mortuary photographs. The photo reproduced here is the result of this command. 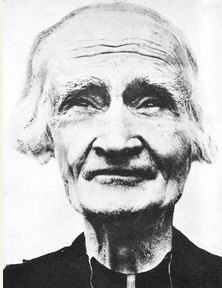 So I don't know if this counts but its more photo realistic, and probably from right around the same time as St. Bernadette's photo

Not the answer you're looking for? Browse other questions tagged church-history saint .

9
To which Saints may a Catholic pray, and when can this begin?
4
Why has "Devil's advocate" office been changed?
7
Do saints and church fathers generally make the claim that most people go to a hell of everlasting torment?
4
Questions about this icon of Saint Sophia
5
What is the proper title for someone who was a pope and is now canonized as a saint?
3
What is the official status of the person of Philomena who at one time was liturgically canonized by Pope Gregory XVI?