What do the paragraph markings in the Jubilee Bible 2000 translation mean?

What do the paragraph markings on the Jubilee Bible 2000 mean? Take a look at the 1st, 5th, 8th verses in 1 Peter 5 (among other examples): 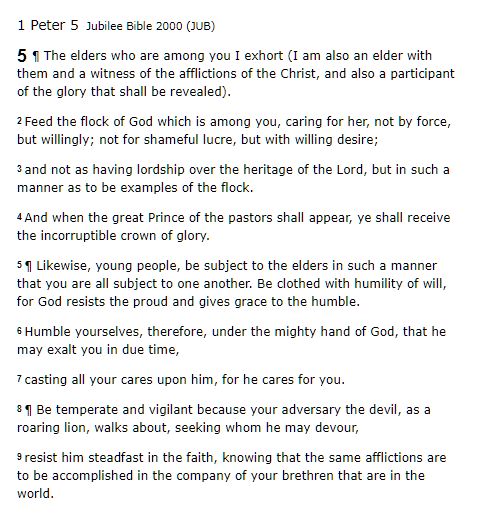 Reading the translator's notes, I see that it was translated from an English version by William Tyndale and a Spanish version by Casiodoro. Maybe these signify something related to these two texts? Maybe when the paragraphs started in one of these texts?

I was not able to find anything specifically related to the paragraph markings in any of the articles in the front and back of the Bible.

bible bible-translation
Share
Improve this question
edited May 14, 2018 at 20:58

Short answer: these paragraph markings are editorial decisions made by the translator, and don't appear in the translations he mentions as his primary sources.

Paragraph markings are a relatively recent phenomenon – most older translations simply presented the text verse-by-verse, including the KJV and Reina Valera Antigua. At the time, such a presentation was innovative – the system used today to mark New Testament verses was only introduced in 1551. Now, of course, verse divisions are ubiquitous, and in order to improve the flow of the text for modern readers, translators have divided the text by paragraphs as well. Like the verse divisions, they are also editorial, but there is less agreement over paragraph divisions.

Thus, most modern translations of the Bible are presented with running text, in which the text is divided into paragraphs, such that each verse does not start its own line. For example, see the same passage in the ESV: verses 1–5 are all one paragraph, and it's only a coincidence when a verse starts on a new line within that paragraph.

But that's not how the translator of the Jubilee Bible broke down the text – he preserved the verse-by-verse layout, but marked new paragraphs with the paragraph symbol. Sadly, he seems to have not explained why, but considering his emphasis on preserving some elements of older translations like the KJV, it seems likely that he wanted to both (1) preserve the verse-by-verse rendering of older translations but (2) indicate the organization of the text to modern readers who expect paragraphs.

Incidentally, this type of formatting is often used in bilingual Bibles, where the verse-by-verse breakdown is particularly useful. For example, here's how it looks in an RVR1960/ESV parallel Bible: 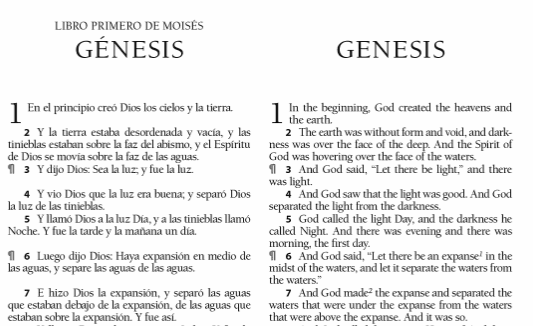 Not the answer you're looking for? Browse other questions tagged bible bible-translation .