When did the angel archetype change from masculine to feminine?

Throughout the bible, angels typically appear as men or a masculin form. They're often described as warriors, engaging in battle. 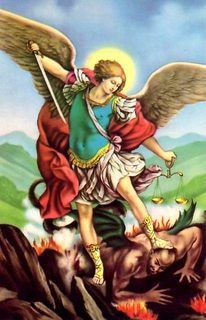 However, in modern, generally Western (or at least American) culture, angels are thought of as feminine figures, often portrayed by women (or Victoria Secret models). 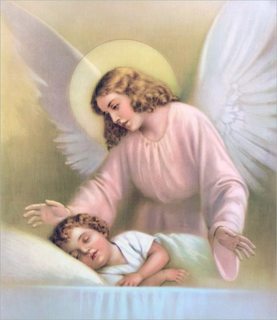 When (about) did this change occur?

I realize this may not be a very well-developed question (please, feel free to modify/enhance it), but I think I'm on to something here - even if it is merely a curiosity.

I get the feeling that one of the reasons for angels being thought as feminine has something to do with the New Age movement and their concept (and often worship of) Guardian Angels, but it's just a gut feeling or sorts.

According to this websitesite, the change occurred gradually over time, as the representation of the human form in art changed. In the middle ages, artists rarely painted distinctly masculine characteristics on their subjects:

ŌĆ”what modern viewers and artists perceive as ŌĆ£feminineŌĆØ angels in many famous medieval European paintings were not intended by the artists to be females at all. Particularly during the Medieval period, the overt ŌĆ£sexualityŌĆØ of much classic Greek and Roman art was almost totally repressed. Bodies were totally covered, both male and female, in long robes.

But artists of the time seldom painted overtly ŌĆ£chiseled,ŌĆØ square-jawed, masculine features on the faces of men. So unless a male was bearded, and particularly if he was represented as a young man, it wasnŌĆÖt all that easy to sort out the vaguely uni-sex heads in pictures by gender.

In the 1800s, a move toward more realistic depiction of the human form in art coincided with a growing interest in angels apart from their original biblical context:

They may have a ŌĆ£spiritual auraŌĆØ connected to them, which makes them look otherworldly, but without any special link to a Heaven where GodŌĆÖs throne is. They are viewed by many as being benevolent supernatural beings whose primary interest is helping out peopleŌĆönot necessarily because they have been sent by God to do so, but because it is just ŌĆ£their nature.ŌĆØ

And as this ŌĆ£newŌĆØ kind of angel has taken shape in the past century or two, the emphasis has shifted more and more to a sort of gentle, nurturing, ŌĆ£motherlyŌĆØ (or ŌĆ£big sisterlyŌĆØ) role for angelsŌĆöhence the trend toward almost entirely representing them as female.

Apart of the early Christian Bishop Irenaeus, the primary source of knowledge is the Nag Hammadi Library of Gnostic Scriptures, which were hidden in the Egyptian desert and just discovered in the twentieth century. There were thirteen codices containing a complete collection of books considered sacred or worthy of saving by the gnostics. Many believe the books were buried to save them from burning during the periods of persecution. The most published work from this "Bible" (Greek for collection of books) is the Gospel of Thomas. However, there were many other books in collection, including Plato's Republic. What is known is that the Gnostics were preserving Greek Knowledge. The word "gnosis" is Greek for knowledge.

While other Christian sects were busy eradicating Greek history, Greek lore, and the Greek language, the Gnostics appear to have been preserving this "gnosis" hence their label "Gnostics". One word of warning: consensus driven wikipedia and other "scholarly" sources ususually talk of gnostics as a form of mysticism, a more "magical thinking" version of Christianity, and they argue that their "magic thinking" for them was "knowledge", however, I strongly disagree, based on my knowledge and in-depth research and analysis, the opposite was true.

I believe the Gnostics kept alive the Greek Goddesses within Christianity, for example the Greek Goddess Nike which became conflated with the Roman Goddess Victory and with "Guardian Angels". There are no descriptions of guardian angels in the Bible. They were male messangers and special mighty warrior messangers for the LORD. But the Greek Goddess Nike flew overhead providing protection. And the Roman Goddess Victoria did so especially for the Roman Legions, providing them with Victory. It seems to me that at an early date in Christian history, the Gnostics began conflating Greek Goddesses with Hebrew Angles, as they carried on the lores and traditions and languages of the Greek, as well as the Hebrew. The other Christians, however, were busy eradicating the language, lore and history of the Greeks where the Greek language predominated. Only the Byzantine preserved the language.

Later on, art work of angles and goddesses would be painted or sculpted. They would be labeled as both. This is part of the process of conflation.

Not the answer you're looking for? Browse other questions tagged church-history angels art gender .

17
When did the pronunciation of "Jesus" change?
10
Where did the religious symbol of the 'halo' come from?
8
Where did the artistic rendering of Jesus originate?
8
When and why did Protestantism begin moving away from liturgy?
5
What type of angel was the Morning Star?
5
Did the invention of the printing press change Christianity?
1
According to Catholicism, did Jesus have a Guardian Angel?