Did the myth of the holy grail originate from Catholicism?

Or its practices? Catholic church sanctioned holy wars suggest they didn't think the Holy Grail a myth back then.

The question is about its' origins, source.

Although the Grail folklore seems to stem from the same centuries as the crusades due to Arthurian legends. Here is a little insight to its' origins. The origins are a mix of cultures. The medieval Church took no official stance on Grail folklore.

The Roots of the Holy Grail

Academic consensus gives the Grail a Celtic origin. The foremost campaigner for this view is Arthurian scholar Roger Sherman Loomis, whose book, The Grail: From Celtic Symbol to Christian Myth (1963), traces it to Irish tales of cauldrons and drinking horns that never run empty as well as accounts of journeys to the Happy Otherworld. The maiden Grail-bearer is based on the personified Sovereignty of Ireland, a woman who gives her cup only to the worthy. These elements were transmitted to Wales, then to Brittany, with Breton storytellers spreading them around northern France where the medieval romances first appeared. Loomis assumes that the material had been much altered by misunderstandings and oral process: There was no one "original" Grail myth.

But it was the connection with the Holy Eucharist that fixed the Grail in medieval minds. The old myths might never have gained such popularity without the Christianization that brought them in line with medieval iconography and devotional practice.

Grail romances appeared just as Eucharistic devotion was gaining favor, expressed in the elevation of the Host during Mass, Corpus Christi processions, preachers' parables, and miracle stories. Hosts that levitate, bleed, discriminate among recipients, serve as the sole food of saints, and reveal visions of Christ appear often in Eucharistic miracles and in Grail adventures. Devout contemplation of the elevated or exposed Host was believed to convey not only grace but well-being and protection, as does an encounter with the Grail.

The medieval Church took no official position on Grail romances. But the cathedral of Valencia claims to possess the actual vessel, a red stone cup from the time of Christ mounted as a splendid chalice during the Middle Ages. Its legend — which owes nothing whatever to the romances — claims that it was sent to Spain by the Roman martyr St. Lawrence. Donated to the cathedral in 1437, it's kept in a special chapel and was once used for Mass by Pope John Paul II. - The Real History of the Holy Grail 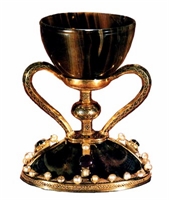 A word as to the attitude of the [Roman Catholic] Church towards the legend. It would seem that a legend so distinctively Christian would find favour with the Church. Yet this was not the case. Excepting Helinandus, clerical writers do not mention the Grail, and the Church ignored the legend completely. After all, the legend contained the elements of which the Church could not approve. Its sources are in apocryphal, not in canonical, scripture, and the claims of sanctity made for the Grail were refuted by their very extravagance. Moreover, the legend claimed for the Church in Britain an origin well nigh as illustrious as that of the Church of Rome, and independent of Rome. It was thus calculated to encourage and to foster any separatist tendencies that might exist in Britain. As we have seen, the whole tradition concerning the Grail is of late origin and on many points at variance with historical truth.

I highlighted a couple of lines about which comments must be made. First as to its point about a possible source, since when does the Catholic Church reject beliefs simply because it is not in Scripture? It doesn't. The real reason the Catholic Church supposedly ignored the Grail was because if true, its origins would place England as equal to, if not above, Rome, and certainly independent of her. Don't go searching for something that, if found, harms your credibility.

If one knows the history of the Easter controversy, one could probably understand this more deeply. So, long before Rome arrived, which NewAdvent is giving a nod to, Christians had arrived who observed Pascha (Easter like) on the 14th of the moon. When Rome finally arrived later, there was controversy over this because Rome observed the Sunday following the full moon following the Spring Equinox.

PS. The Valencia Chalice is not the Grail.

Not the answer you're looking for? Browse other questions tagged catholicism biblical-basis church-history origin .

0
Did the church use stories like the Holy Grail to attract pagans?

12
The unicorn as a Christological figure
2
What is Reasoning behind the Inquisition and Separation of Holy days to be separate from the Israeli Sabbath
18
What is the origin of the idea that Matthew, Mark, and Luke didn't mention Lazarus in order to protect him?
4
How did the threefold distinction of Deacon, Priest and Bishop come about?
4
According to Catholicism, what is the difference between forgiveness and release from punishment?
3
Marriage invalid. Would a church annulment require a state annulment or state divorce?
1
What is a Catechism and when and how did they originate
3
What is the origin of the cope?
4
In Catholicism since when did willfully violating Sunday Mass obligation become mortal sin?
3
According to Catholicism, does reception of the gift of the Holy Spirit protect against demon possession?