What was the earliest reference to the 3 States of the Church?

The Churches Militant, Penitent and Triumphant are used quite regularly not only in The Catholic Church but also in some Protestant denominations. The Catechism has a reference to the three states of the Church in paragraph 934. I'm interested in the earliest uses of the term. Even in part, as the for example, the use of the Church as Christ's militant.

Valid answer will be the oldest verified use of one or more of the terms.

The mediaeval schoolmen distinguished three stages in the catholic church as to its locality,—the militant church on earth (ecclesia militans), the church of the departed or the sleeping church in purgatory (ecclesia dormiens), and the triumphant church in heaven (ecclesia triumphans). This classification was retained by Wiclif [1330-1384], Hus [1369-1415], and other forerunners of Protestantism; but the Reformers rejected the intervening purgatorial church, together with prayers for the departed, and included all the pious dead in the church triumphant. History of the Christian Church, Volume VII. Modern Christianity. The German Reformation

Think you, brother, that their wickednesses against God are trifling, their sins small and moderate—since by their means the majesty of an angry God is not besought, since the anger and the fire and the day of the Lord is not feared—since, when Antichrist is at hand the faith of the militant people is disarmed by the taking away of the power of Christ and His fear? - Fathers of the Third Century: Hippolytus, Cyprian, Caius, Novatian - Epistle LIV

That to penitents the times of their penance shall be assigned by the will of the bishop according to the difference of their sins; and that a presbyter shall not reconcile a penitent without consulting the bishop, unless the absence of the bishop urges him necessarily thereto. But when of any penitent the offence has been public and commonly known, so as to have scandalized the whole Church, he shall receive imposition of the hand before the altar (Lat. “before the apse”). - The Seven Ecumenical Councils -Canon XLII

The term Ecclesia Militans (Church Militant) has been traditionally ascribed to Pope Clement V in his letter to King Philip IV in 1311. 1

The image below is titled The Church Militant and the Church Triumphant, fresco by Andrea da Firenze in Santa Maria Novella, c. 1365 2 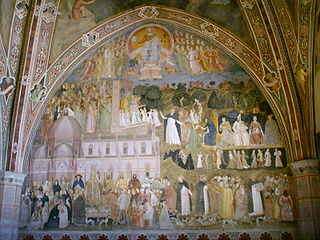 1. The Oxford Dictionary of the Middle Ages
2. The Church Militant and The Church Triumphant at Project Gutenbeg

Not the answer you're looking for? Browse other questions tagged church-history terminology origin .