Trying to find information on a crucifix found whilst metal detecting

I am trying to find the age of a silver cross that I have found on a site that had a benedictine priory on it from 1149 to 1540. 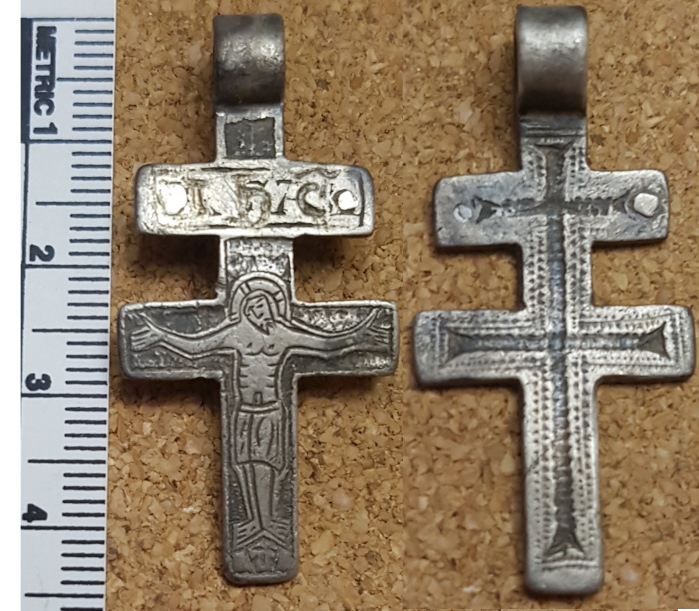 I believe that clues to its age are the use of a two bar Patriarchal Cross with "IHC" on the top bar.

No wound mark in the abdomen, although wound marks on the hands and feet.

I would appreciate any advice as to age that you could provide.

just an update on the cross I found.

The British Museum have reviewed it and come back with their findings. It is taking an age to further process due to Covid. The artefact has been declared as treasure. They however appear a little lost in defining it's exact age, given the age mix of the design attributes/styles.

They are not aware of anything else which is similar. Some attributes are "romanesque", some are akin to 13th Century design, some potentially 16th Century design. They do believe that it was once gilded with trace elements of mercury and gold having been found on it. The silver content is 93-95%. The loop has a lower lead level than the rest which suggests that although it was added later, it was not much later. They have declared the age to be anywhere from 1200-1700, even though their are Romanesque attributes.

As it is more than 10% precious metal and at least 300 years old, they have classed it as an item of treasure, under the Treasure Act of 1996. The cross is with the coroner waiting to have its day in court when they will decide if it will be compulsory purchased by the Museum or returned to the finder and Land Owner. I will update the page with the findings of the proceedings when they finally take place.

Not the answer you're looking for? Browse other questions tagged art cross crucifix or ask your own question.

7
Are there non Catholic/Orthodox churches that use a Crucifix?
5
Is Jesus depicted as dead or alive on a crucifix?
1
Is the sign of the Cross as well as the crucifix a Catholic “trade mark”?