Who started the Judensau image?

I found about Judensau sculpture when I want to know deeper about Martin Luther. Below is a little bit information about Judensau I read from Wikipedia:

A Judensau (German for "Jews' sow" is a folk art image of Jews in obscene contact with a large sow (female pig), which in Judaism is an unclean animal, that appeared during the 13th century in Germany and some other European countries

The earliest appearance seems to be on the underside of a wooden choir-stall seat in Cologne Cathedral, dating to about 1210

The arrangement of Jews surrounding, suckling, and having intercourse with the animal (sometimes regarded as the devil), is a mockery of Judaism and example of antisemitic propaganda.

Why does it seem that Martin Luther did not oppose Judensau? Who started the Judensau?

It seems that the Judensau developed primarily in Germany and in German speaking regions of Europe. Although the oldest known example of a Judensau that is still in existence, although badly weathered, is dated to about 1230 and located in the Cathedral of Brandenburg, there was no know general understanding of what Judensau meant prior to Martin Luther. Who started the Judenau is impossible to ascertain. 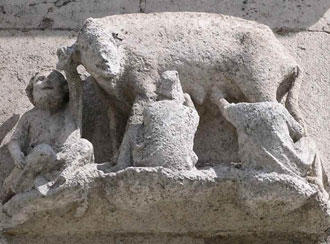 The weathered sculpture on Regensburg's cathedral

The centerpieces of this essay are the infamous and public Judensau depictions of medieval Europe, statuary that frequently contained both scatological and COPROPHAGOUS elements. The known examples seem to have been in the German realm, even those now found in France, Switzerland, Poland, and Sweden; Poland and Sweden were under heavy German influence, if not actually populated by Germans.

The depictions continue to exist even after almost eight centuries, though their locations and particulars are not well known. Not until the late Isaiah Shachar documented a variety of them did their presence and scope in the twentieth century become rediscovered.1 Because Shachar’s pamphlet is not generally available, I have created this summary of the subject, after visiting the Judensau shown in this essay.

The Judensau had no standard form, except for an unclear connection of unknown origin between Jews and pigs. A Jew, frequently reading, might ride on the back of a pig, occasionally in a reversed position. Or else a Jew might embrace a pig, sometimes in a position that implied some form of copulatory behavior. One or more Jews, sometimes children, may be seen underneath the pig, suckling at its teats. There may be a Jew positioned behind the pig, being sprayed with or eating excrement, or drinking the pig’s urine, or pointing at the pig’s rectum. A Jew might be seen kissing the snout of the pig or the pig kissing a Jew.

Though the term “Judensau” does not allow one to conclude either the reasons behind its creation or what its specific content might be depicting, the general subject was always the same—i.e., Jews and pigs in a derogatory portrayal.

Rev. Martin Luther gave a personal interpretation of a specific Judensau, one still on public display in Wittenburg, Germany, described and shown below. Luther entirely invented perspective associated Jews with deviltry, while the filth of the pig was given as a metaphor for the Talmud. But prior to Luther’s description, there was no general understanding of what these Judensau meant, outside of relating a Jew and a pig in some unclear way. One interpretation that has been offered expresses the notion that the Jews belonged to the sow, the sow to the Jews—i.e., both were examples of an abominable category of filthy beings. While early Judensau representations may have been nothing more than a repulsive joke of which Jews were the targets, Luther’s interpretation has incorrectly often been applied retroactively to all Judensau carvings, statuary, and decorations. - JOURNAL FOR THE STUDY OF ANTISEMITISM (Vol. 2 Pages 393- 394). 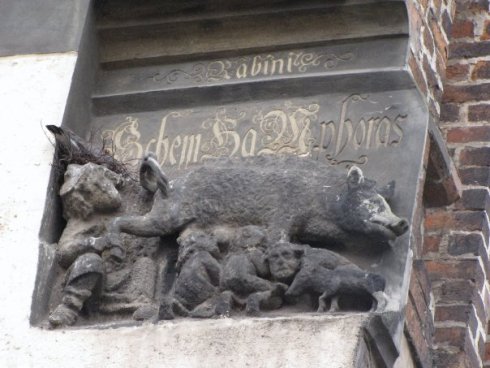 The Judenau seems to have developed in German speaking areas only, rather than one from English speaking regions. We can not say with any surety the origins of the Judensau, nor its' true original meaning at this point in time.

One of the main questions remains why the Judensau developed primarily in the German speaking regions. Isaiah Shachar sees different readings and inter pretation of Biblical texts, an aligning of the swine with the Jews in Hrabanus Maurus’ De Universo, at the origin of the development, contrasting the German tradition with the English that is remarkably void of the Jew sow motif, in spite of the quite numerous examples of sows, often with suckling piglets, in English churches and monasteries as well as in manuscripts of bestiaries. Both traditions share the idea of the filthiness of the swine, utilizing the animal to symbolize impurity, thus also serving as a symbol for heretics, and the vices of luxuria andgula, yet the sow with piglets seems to be a distinctive feature of the English manuscript illustration. Recently, Israel Yuval has launched the appealing theory that the Judensau motif derived from the vilification of the Messianic donkey, that it is, in fact, it's satiric opposite. - Laughter in the Middle Ages and Early Modern Times

It is not solely Christians who used the imagery of pig in a derogatory fashion.

The pig as a derogatory image was neither reduced to Jews nor used exclusively by Christians. Both Christians and Jews equated Muslims to pigs. - Laughter in the Middle Ages and Early Modern Times Page 330, Note #17

Not the answer you're looking for? Browse other questions tagged martin-luther judaism art or ask your own question.

1
What were people called who believed in the "Christ" before Jesus was born?
9
What is the earliest point in history where the cross icon started showing up on artifacts related to Christianity?
2
An image of half a leg on a church wall?
7
Who were the "scribes" whom Jesus often disputes against in the canonical gospels?
11
What's the significance of this image for Jehovah's Witnesses?
3
Who were the main Protestant precursors?
1
Chimera Image on my leather jacket?
1
Who were the recepients of Christian monumental sculptures in the early middle ages (10th and 11th century)?