Do we know the fates of any of the implausible relics Martin Luther described?

Martin Luther described a number of extraordinary relics that his contemporaries are said to have.

“Certain men have impudently boasted that they possess a feather from the holy angel St. Michael. The bishop of Mainz claims to have a flame from the bush of Moses. So in Compostella the banner is exhibited that Christ had in hell, and likewise the crown of thorns, the nails, etc., and also some of Mary’s milk.” (Martin Luther's Works, Vol 54.247)

My interpretation is that Luther was incredulous that anybody would believe these were genuine relics, not the least of which would be the logistical issues with preserving them well into the 16th century. (How would a flame that doesn't consume anything be kept for thousands of years without anyone recording it? How how did someone get hold of a banner that Christ had in Hell?)

Do we know the fate of any of these implausible relics? Were they destroyed by Protestants? Were they discarded by the Catholic church? Are they still venerated as authentic relics?

Do we know the fates of any of the implausible relics Martin Luther described?

The answer to this question will depend on the relic!

When I was a young altar server, the standard joke was that if you were good you would be able to find a "feather of St. Michael." We all understood this as a joke because Angels are intellectual in nature. This joke is as old as people have been able to believe in such things.

We all know that Angels are purely spiritual beings and do not possess a physical body what so ever. The Holy Angels can appear to individuals as seen in Scriptures, but in assumed bodies.

As we see, it is not possible for any relic of St. Michael to possibly exist. Nevertheless some of the faithful believe in such tales or folklore.

You Find a Feather

St. Michael is a very clear communicator. You will most often hear his guidance in your mind or sense it as a gut feeling. There are instances when, to get his point across clearly, Michael will send physical signs as proof of his guidance. Since Archangel Michael is a protector, his signs are designed to comfort and reassure. If you question or do not notice the signs that he sends, he will find a way to communicate his message in different ways until you are at peace.

One of the most well-known signs that you have been visited by an angel is finding a feather. These magical blessings are something many of us keep an eye out for and treasure once we discover. Often referred to as "calling cards", feathers are left as reminders that angels are watching over us. - How To Tell When St. Michael Is Watching Over You

In conclusion to this feather idea of Martin Luther, it would seem that he was simply repeating an old wise tale.

I am sure that it may have been possible that the Bishop of Mainz could have made a claim that he possessed the flame from the burning bush of Moses.

There run many stories or rather jokes that relics of similar such things may exist. For example, we would joke around that the Sacred Congregation of Relics (Rome) possesses a relic of the 10 plagues of Egypt and hopefully it would not be rediscovered and broken open (even accidentally). Stories turn into legend and legends ...

As for the banner that Christ had in hell, I can find no source of such a relic ever existing. Perhaps Martin Luther at one time heard of this story, but it remains that.

As for the relics of Mary's Milk, it is somewhat of a more passible relic. At least in the sense that it could be a third class relic.

First-Class Relics: items directly associated with the events of Christ's life (manger, cross, etc.) or the physical remains of a saint (a bone, a hair, skull, a limb, etc.). Traditionally, a martyr's relics are often more prized than the relics of other saints. Parts of the saint that were significant to that saint's life are more prized relics. For instance, King St. Stephen of Hungary's right forearm is especially important because of his status as a ruler. A famous theologian's head may be his most important relic. (The head of St. Thomas Aquinas was removed by the monks at the Cistercian abbey at Fossanova where he died.) If a saint did a lot of traveling, then the bones of his feet may be prized. Catholic teaching prohibits relics to be divided up into small, unrecognizable parts if they are to be used in liturgy (i.e., as in an altar; see the rubrics listed in Rite of Dedication of a Church and an Altar).

Second-Class Relics: items that the saint owned or frequently used, for example, a crucifix, rosary, book, etc. Again, an item more important in the saint's life is thus a more important relic. Sometimes a second-class relic is a part of an item that the saint wore (a shirt, a glove, etc.) and is known as ex indumentis ("from the clothing").

Third-Class Relics: any object that is touched to a first- or second-class relic.[38] Most third-class relics are small pieces of cloth, though in the first millennium oil was popular; the Monza ampullae contained oil collected from lamps burning before the major sites of Christ's life, and some reliquaries had holes for oil to be poured in and out again. Many people call the cloth touched to the bones of saints "ex brandea". But ex brandea strictly refers to pieces of clothing that were touched to the body or tombs of the apostles. It is a term that is used only for such; it is not a synonym for a third-class relic. - Relic (Wikipedia)

According to an ancient tradition, some of the milk that Mary produced while nursing the Infant Jesus fell on the floor of the cave at Bethlehem. Later on the faithful would come and collect some of the chalk-like stone as a third class relic.

A short distance south of the Church of the Nativity in Bethlehem is a shrine called the Milk Grotto, on a street of the same name.

An irregular grotto hollowed out of soft white rock, the site is sacred to Christian and Muslim pilgrims alike. It is especially frequented by new mothers and women who are trying to conceive.

According to tradition, while Mary and Joseph were fleeing Herod’s soldiers on their way to Egypt, they stopped in this cave while Mary nursed the baby Jesus. A drop of Mary’s milk fell upon the stone and it turned white.

The grotto has been a site of veneration since the 4th century, the first structure being built over it around AD 385.

By mixing the soft white chalk with their food, and praying to Our Lady of the Milk, they believe it will increase the quantity of their milk or enable them to become pregnant.

Rows of framed letters and baby pictures sent from around the world to the Milk Grotto testify to the effectiveness of the “milk powder” and prayer. (The powder is available only at the shrine; it may not be ordered from overseas.) - Milk Grotto 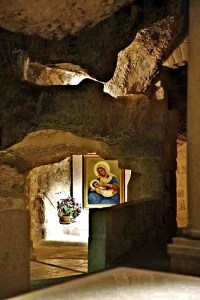 Inside the Milk Grotto church

As for the relics of the Passion of Our Lord Jesus Christ, the Catholic Church believes that they do exist and that she is in possession of such relics:

Not the answer you're looking for? Browse other questions tagged catholicism martin-luther relics or ask your own question.