Was the 1914 prophecy (derived from the book of Daniel) ever mentioned in any newspapers before World War I?

This question is about the time period of 2520 years derived from the book of Daniel and the calculations that that period ended in 1914.

There is this other question that states that this calculation was used in the March 1880 Watch Tower magazine to identify the year 1914 as the time for the close of “the appointed times of the nations”.

Also the answer to that question brings out some other people who had come to similar conclusions even earlier than 1880. So it looks like 1914 was identified, at least in some circles, as a somehow special year decades before it arrived.

What I wanted to know is whether any evidence exists outside of Jehovah's Witnesses literature, such as articles in public newspapers from late 1800's or early 1900's, that talk about this prophecy regarding the year 1914?

I have some newspaper articles although only a couple of the ones I have are the type that they are written by the newspaper's journalists.

One I have is a letter to the editor (in defense of Charles Russell) and other one is one of those "Pastor Russell Sermons" that some newspapers carried.

The "Pastor Russell Sermon" titled, "Overturned Until He Come" was published in the Twin Falls News on August 31st, 1911.

In this article he refers to the 2520 years ending on October 1914. The paragraph under the subtitle "The Time of the Gentiles" in the second column states:

When God removed the typical kingdom of Israel and His typical throne in the world, He gave over the earthly dominion to the Gentiles; and this lease of power, as represented in Daniel's prophecy, was to continue for "seven times" - 2,520 years. In other words, during the same period that Israel would be having "seven times" of tribulation and subjection, the Gentiles would be having "seven times" of prosperity; and both will terminate at the same time - in 2,520 years from G.C. 606 - October, A.D. 1914.

This sermon is shown in the image below. 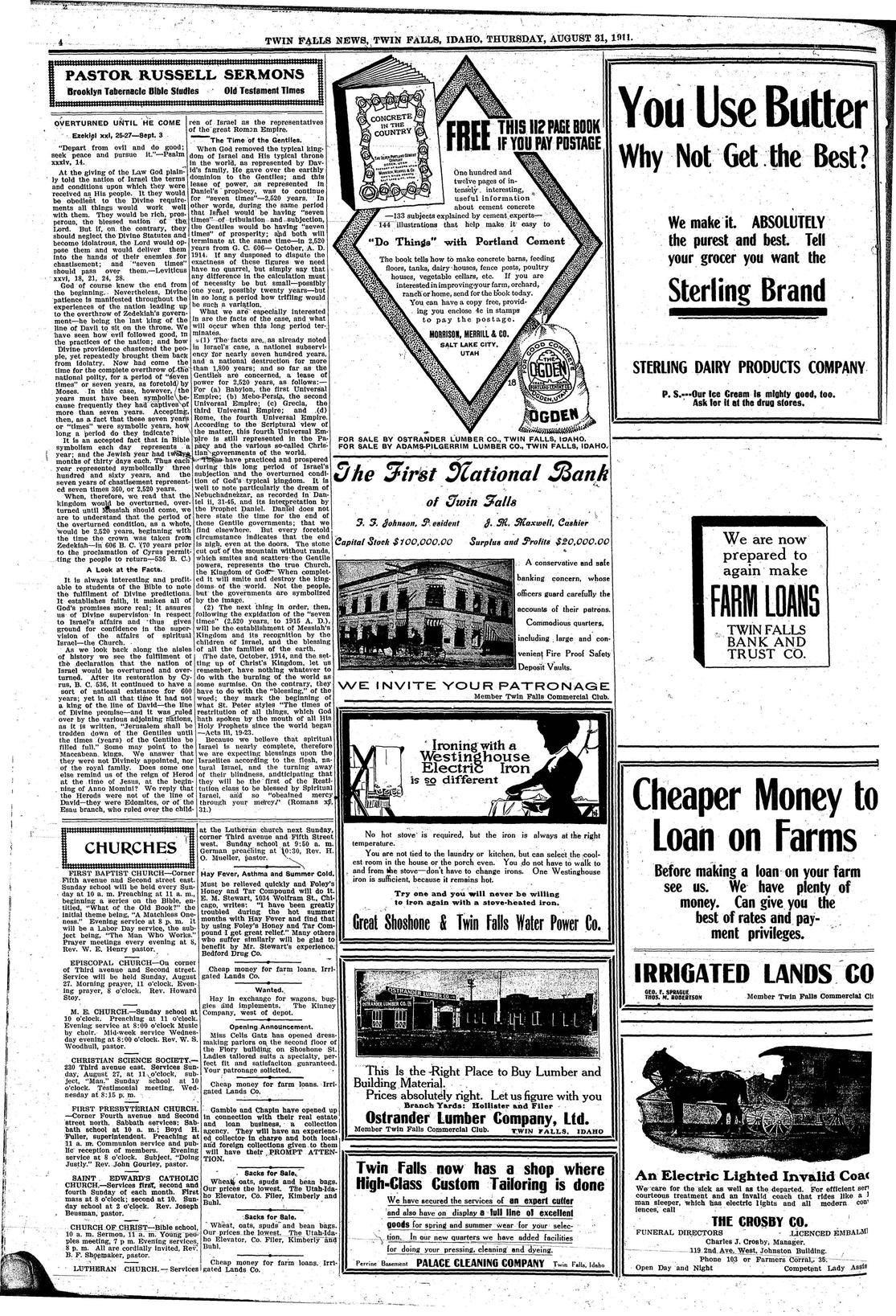 Another article is from The Lima Daily News, dated March 28th 1914. This article was written to address what some minister was saying in Canada that the world will end (as in "the earth will get destroyed") in 1914. This article also appeared in The Newark Daily Advocate on March 23rd, 1914.

I have copied some of the text below to provide a gist of what he wrote about world's end and 1914:

I was prompted in the selection of my text for today by reading an extract from the sermon of a Canadian minister delivered recently. In it he declared that 1914 would witness the Second Coming of Christ, etc. His statement allowed for the inference that he holds the view common to nearly all the creeds; namely, that the earth is to be burned up and the human race blotted out; and that, incidentally, Christ will come a second time, to see that none of the Church are included in the destruction.

Mistakes of Dark Ages Being Corrected.

To my understanding, all such expectations are wholly unscriptural, untrue, misleading, and hindrances in the right understanding of the Bible.

If we have the correct date and chronology, Gentile Times will end this year - 1914.

What of it? We do not surely know. Our expectation is that the active rule of Messiah will begin about the time of the ending of the of power to the Gentiles. Our expectation, true or false, is that there will be wonderful manifestations of Divine judgments against all unrighteousness, and that this will mean the breaking up of many institutions of the present time, if not all.

This article is shown below. 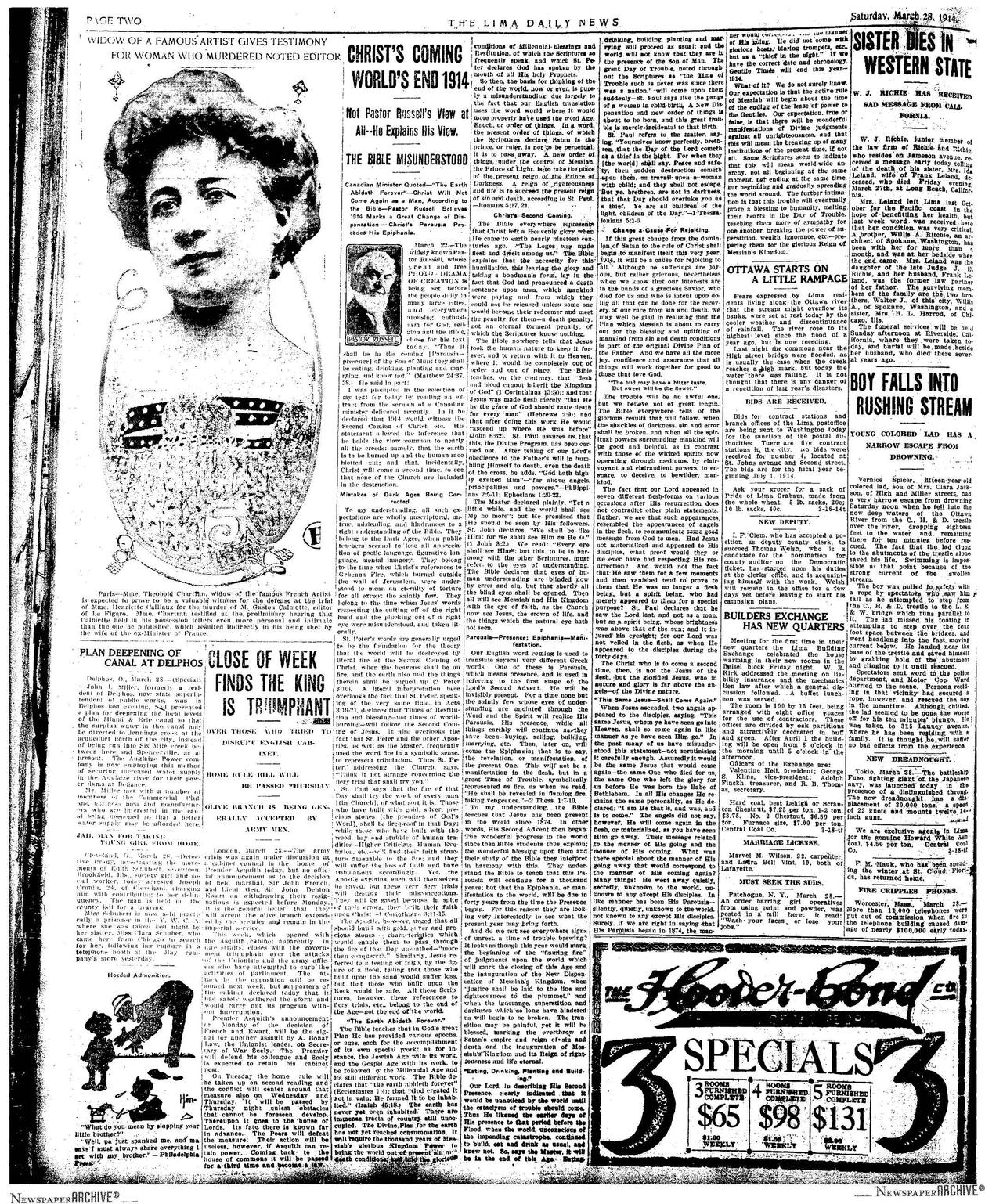 I also had two that were written by the newspapers after the war had already started (Wikipedia gives 28 July 1914 as the start date).

One of these, titled "End of all Kingdoms" was published in The World Magazine on August 30th, 1914. The other one, shown below, was in The Fort Wayne Journal-Gazette on October 4th 1914 (a thumbnail of this page can also be seen here).

As a side note, the interesting part of this article was the below statement (in the fifth column, second paragraph) but only because it seems that overall people did not expect a war to start that year, let alone one that turned to be a World War. 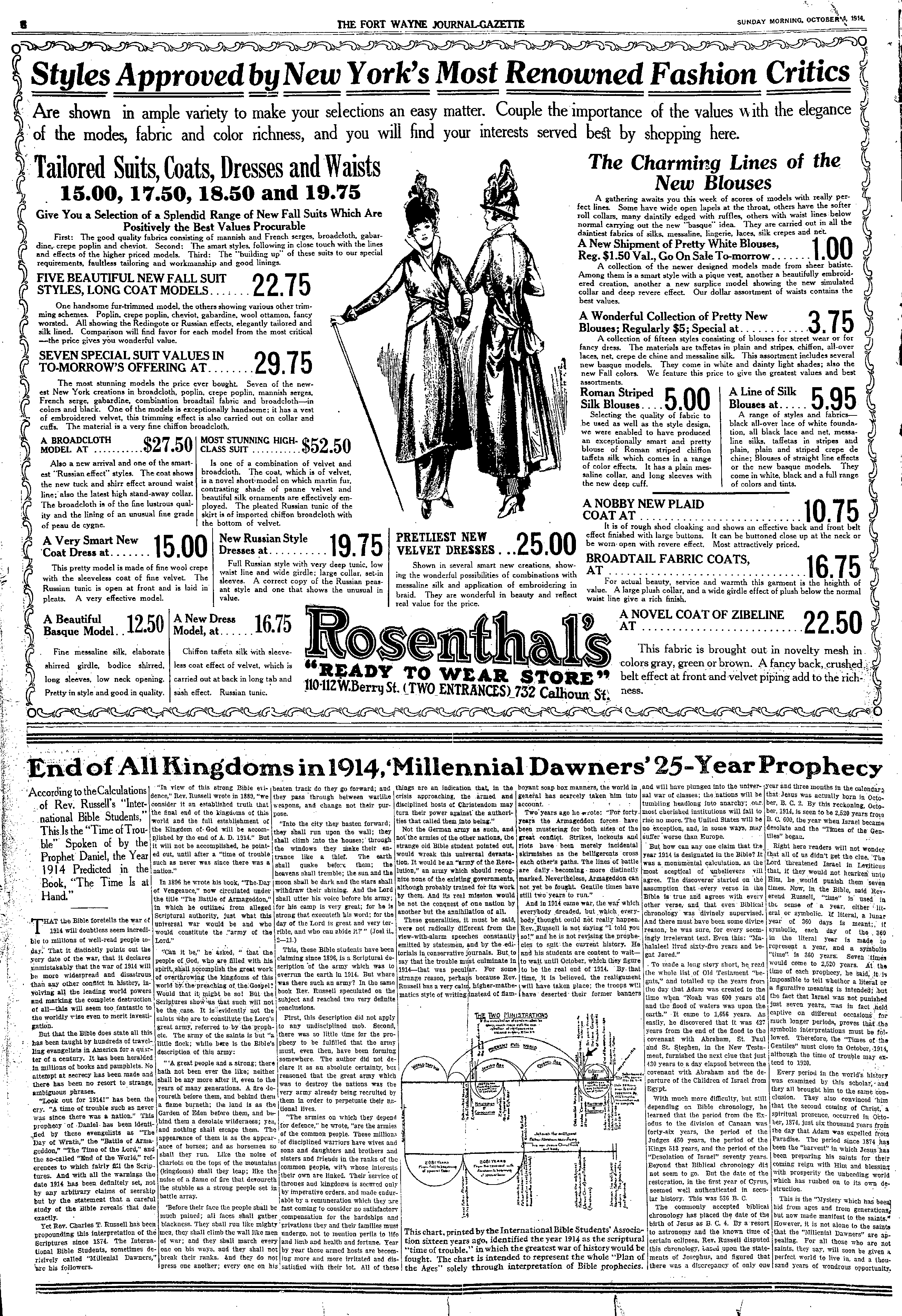 The booklet “VERMONT HISTORY-The proceedings of the Vermont Historical Society” summer 1993 issue, vol. 61, No. 3 on page 134; par 2, might be of interest to you. It gives a mention about an evangelical Bible and Pentecostal training school in Nashville, Tennessee in the early 1900’s which says “The schools founders were driven by a conviction that Christians were living in a time of extreme urgency, the apocalyptic “last days” before Christ’s prophesied return to set up his kingdom on earth...they believed Christ’s long anticipated return was ‘so near in fact there was scarcely time to do more than preach’.” So while its not specifically about 1914 and Daniel, it shows there was anticipation regarding the arrival of Christ’s Kingdom among other religious denominations during that time. The research article is about a minister in Vermont who tried to convince his flock killing in wartime during WWI was a no-no for a Christian. https://vermonthistory.org/journal/misc/EspionageInWindsor.pdf

In 1843, a British tract published 1917 as a possible date for the end of the Gentile Times.

In 1849, Robert Seeley, of London, dealt with the subject in like manner.

Joseph Seiss, of the United States, pointed to 1914 as a significant date in Bible chronology in a publication edited about 1870.

In 1875, Nelson H. Barbour wrote in his magazine Herald of the Morning that 1914 marked the end of a period that Jesus called “the appointed times of the nations.”—Luke 21:24.

Not the answer you're looking for? Browse other questions tagged prophecy jehovahs-witnesses daniel .

12
What does this reference in the Watchtower Online Library mean?

9
Do the Dead Sea scrolls describe any prophecy which was fulfilled after they were written?
8
Do any other denominations agree with the Jehovah Witnesses that Satan was cast to earth in 1914?
12
What does this reference in the Watchtower Online Library mean?
2
Are there any Christian Restorationist denominations that believe their establishment was the fulfillment of Biblical prophecy?
3
How do Jehovah's Witnesses justify their interpretation of Daniel chapter 4 given the specificity of the text?
9
How do Jehovah's Witnesses explain the dramatic changes in their eschatology?
5
How do Jehovah’s Witness support their belief that Jesus started ruling (invisibly) from heaven in 1914? What has been happening in those 107 years?