How are people who were not approved by Jesus (Matthew 7:21-23) still able to expel demons? [closed]

Ask Question
Asked 3 years, 2 months ago
Active 2 years, 11 months ago
Viewed 387 times
4
Closed. This question is opinion-based. It is not currently accepting answers.

In Matthew 7:21-23 Jesus said about a future situation as follows:

21 “Not everyone who says to me, ‘Lord, Lord,’ will enter the kingdom of heaven, but only the one who does the will of my Father who is in heaven. 22 Many will say to me on that day, ‘Lord, Lord, did we not prophesy in your name and in your name drive out demons and in your name perform many miracles?’ 23 Then I will tell them plainly, ‘I never knew you. Away from me, you evildoers!’ (emphasis added)

These people in this situation who refer to Jesus as "Lord" apparently believed in both their exorcism and that they were doing his will (or, rather, his fathers will as he stated in verse 21).

But these are people who at least verbally put faith in Jesus but yet are not approved by God.

My question is, how are they able to drive out demons if they are not approved by God?

It is possible that they are not casting out the demons but that the demons participate by leaving on their own accord, in order to provide credence to the preacher.

Exorcism exists also in other religions such as some forms of buddhism (they call it bgegs-bloz-chog or za-dre kha sgyur depending on the ritual) and among the nature religions of Africa. Sometimes the show to exercise the demon can be quite "extravagant". This is all for the audience because Satan's intention is to mislead, and confuse if necessary.

Demons are capable of other works as well that to us look miraculous, such as healing people.

Some of the miracles done by demons look like they are from God, such as in the case of the Simon mentioned in Acts 8:9-11. This passage says:

9 Now for some time a man named Simon had practiced sorcery in the city and amazed all the people of Samaria. He boasted that he was someone great, 10 and all the people, both high and low, gave him their attention and exclaimed, “This man is rightly called the Great Power of God.” 11 They followed him because he had amazed them for a long time with his sorcery.

To the people in the city of Samaria the miracles made by Simon looked like they were from God.

Expulsion of demons and other miracles were also accomplished through "magic" as in the case of people in the ancient city of Ephesus. Acts 19:18-19 tells us that the residents of Ephesus had a large amount of books of that nature:

18 Also many of those who were now believers came, confessing and divulging their practices. 19 And a number of those who had practiced magic arts brought their books together and burned them in the sight of all. And they counted the value of them and found it came to fifty thousand pieces of silver.

An old book titled "Notes, Explanatory and Practical, on the Acts of the Apostles" by A. Barnes (published 1863) said on p.264 (left column on the left-side page here) about magic in Ephesus:

The Ephesian letters...seem to have consisted of certain combinations of letters or words, which, by being pronounced with certain intonations of voice, were believed to be effectual in expelling diseases, or evil spirits; or which, by being written on parchment and worn, were supposed to operate as amulets, or charms, to guard from evil spirits, or from danger. Thus Plutarch (Sympos. 7) says, "the magicians compel those who are possessed with a demon to recite and pronounce the Ephesian letters, in a certain order, by themselves."

There is no reason to doubt that "miracles" such as "expelling demons" could be done through these "Ephesian letters" as was stated by Plutarch. We already know from the case of Simon (referred to above) that people were misled thinking that his powers came from God, so apparently those abilities were real.

Demons would likely had wanted to give the impression that such incantations work at least some times, in order to hook people in believing in them.

This is all not particularly surprising in light of 2 Corinthians 11:14-15:

14 And no wonder, for Satan himself masquerades as an angel of light. 15 It is not surprising, then, if his servants also masquerade as servants of righteousness. Their end will be what their actions deserve.

The reason for this is that what matters to Satan is that we do not find the path to serve God the right way. Other than that he does not care who or what our God is; it could be money (Matthew 6:24) or our own gut (Philippians 3:19). The issue of whom we worship matters as can be seen in the 3 tests where he was trying to get Jesus to break God's laws (Matthew 4:1-10) in seemingly small ways (not through murder, adultery, or such things). The only test where Satan actually offered something to Jesus in return was the last one in which he offered to give Jesus all earth's kingdoms for an act of worship.

Here is part of the p.264 from the book "Notes, Explanatory and Practical, on the Acts of the Apostles" by A. Barnes: 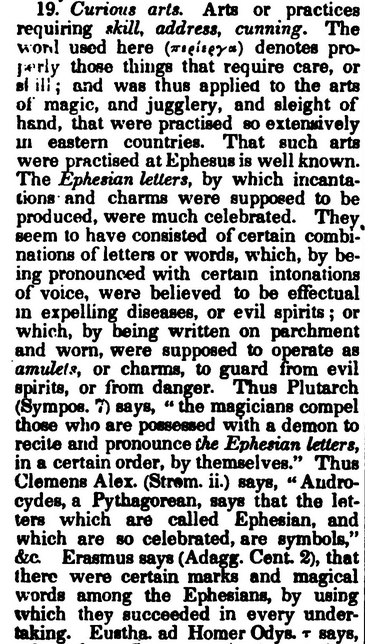 I suggest reading 1 Corinthians 9, especially verse 27, for a possible connection between their ability to cast out demons and the words of Jesus. Paul disciplined his body lest the flesh corrupt his ministry of preaching the gospel and disqualify him for a prize at the judgment seat of Christ. It is possible that the flesh corrupted these men in Acts; although they could cast out demons using Christ's name, they themselves were disqualified because they did not maintain close ties to Jesus. Their work was more important than the relationship. "I never knew you" indicates this.

It's possible that the men were casting out demons of a more timid nature. In Matthew 17:19-21, when the disciples asked Jesus why they could not cast out a demon, Jesus told them that this kind won't go out except when accompanied by prayer and fasting.

Not the answer you're looking for? Browse other questions tagged life-of-jesus demons pentecostalism exorcism or ask your own question.

8
How could the person in Luke 9:49 cast out demons without Jesus' mandate?
3
How do the proponents of the doctrine that salvation can't be lost usually explain Matthew 7:21-23?

9
Driving out spirits in Jesus's name with discrepancy in Bible
7
Is there any methodology according to Bible to drive out demons from possessed people?
8
How could the person in Luke 9:49 cast out demons without Jesus' mandate?
4
What are the rules of Exorcism (Catholic Perspective)
1
Mark 5 Jesus encounter with the demons: what is their relationship to Jesus?
1
Does any Church currently incorporate exorcism, three dunkings, and anointing in their baptism rite?