Do Jehovah's Witnesses believe that the 1918 influenza was caused by Satan?

The accepted answer to this other question of mine mentioned that

epidemics like the Spanish influenza are thought to be strong evidence of Satan’s being confined to the vicinity of the earth.

This kind of caught my interest since I had read this book about the 1918 flu by Gina Kolata for which the author had interviewed researchers that had worked on finding the causes behind the Spanish influenza.

Just for summary, some of the features about this pandemic were things like

One of the researchers interviewed in the book was virologist Jeffery Taubenberger who said that a virus that is this good for killing people is "far out on the edge of what is possible for influenza viruses" (p.304; reference added to the bottom of the page) because any mutation would likely make it weaker (additionally a much stronger virus might kill its host before being able to propagate).

So clearly the virus behind that pandemic was of a rather nasty type.

Considering the significance that Jehovah's Witnesses place on the events during the years of the First World War, do they view this influenza as having been caused by Satan? Has any official Jehovah's Witness statement ever been made on this?

Screen shot of the page 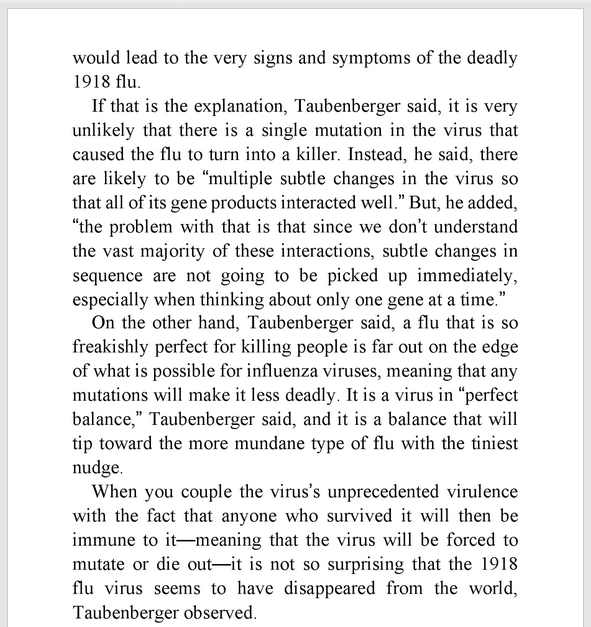 Jehovah's Witnesses don't necessarily attribute the Spanish flu directly to Satan, but they do believe Satan at least played a large role in it, since it was in the aftermath of World War 1.

War on Earth and War in Heaven

Some 19 centuries before the outbreak of World War I, Satan offered Jesus “all the kingdoms of the world.” (Matthew 4:8, 9) Jesus rejected that temptation, but he later described the Devil as “the ruler of the world.” (John 14:30) Additionally, the apostle John wrote that “the whole world is lying in the power of the wicked one.”—1 John 5:19.

If Satan the Devil has so much power over the world, would it not be reasonable to conclude that he played at least a part in the first world war and its aftermath? Sure enough, the book of Revelation links Satan to the calamities the earth has suffered since 1914. Here is a brief outline of the events described in Revelation chapter 12:

Verse 7 War breaks out in heaven between Michael (Jesus Christ) and the dragon (Satan).

Verse 9 The Devil, “who is misleading the entire inhabited earth,” is hurled down to the earth.

Verse 12 “Woe for the earth and for the sea, because the Devil has come down to you, having great anger, knowing that he has a short period of time.”

Bible chronology and world events indicate that this heavenly war occurred after God’s Kingdom was established in the heavens in 1914.* So the same pivotal year saw the outbreak of war on earth and war in heaven.

In 2005, there was an Awake! magazine where the cover subject was all about the Spanish flu. It also mentions the book you mention by Gina Kolata. The whole magazine is pretty interesting, but here's the part which deals specifically with how it relates to Bible prophecy.

SOME students of the 1918-19 flu pandemic have been powerfully reminded of Bible prophecies. For example, Gina Kolata notes in her book Flu—The Story of the Great Influenza Pandemic of 1918 and the Search for the Virus that Caused It: “They called the plague of 1918 influenza, but it was like no influenza ever seen before. It was more like a biblical prophecy come true.”

Does the Bible actually say anything that bears on this human calamity? In fact, it does.

The disciples of Jesus Christ asked him for a sign of “the conclusion of the system of things.” (Matthew 24:3) Jesus answered by saying: “Nation will rise against nation, and kingdom against kingdom; and there will be great earthquakes, and in one place after another pestilences.” (Luke 21:7, 10, 11) The Bible also foretells that during the time of the end, there will be “deadly plague.”—Revelation 6:8.

The Spanish flu epidemic began toward the end of the Great War (1914-18), later called World War I. That period saw the start of the fulfillment of Bible prophecies regarding “the last days.” These prophecies mention horrific food shortages, great earthquakes, increasing lawlessness, and a remarkable deterioration of human values. No doubt you are well aware of those very conditions in the world today.—Matthew 24:3-14; 2 Timothy 3:1-5.

For more information, see these search results on jw.org for "Spanish flu".

Not the answer you're looking for? Browse other questions tagged eschatology jehovahs-witnesses or ask your own question.