Why is Christ often shown with long hair in Christian iconography?

A friend of mine is Catholic and she has an icon or picture of Christ. It shows him with long, dark brown hair. Is there anything in the New Testament that justifies this representation? It seems to me, and I could be wrong here, that it a common representation.

If not, how far can we trace back this representation? Did it become prominent early on in Christianity?

In the interest of clarity, I should point out that I'm a Sunni Muslim and that I do realise that many forms of Islam frown on figurative representation. I'm not really interested in that debate. The question is purely a question about Christian iconography.

It is true that Our lord Jesus Christ is most often portrayed as having long hair. In the New Testament, no reference is made about the outward appearance of Jesus. St. Paul himself was not a fain of long hair as one can read in 1 Cor. 11:14-15.

Let us remember that St. Paul was a Roman citizen and the Romans had shorter hair.

The men at the time of Jesus definitely had long hair and the Jewish Encyclopedia bares this out.

From the Old Testament it may be gathered that it was customary for the men to have their hair cut from time to time. The Nazarites allowed theirs to grow uncut for religious reasons. Absalom, proud of his thick head of hair, had it cut once a year only. But generally the hair was cut oftener. It was never shaved save on special occasions; the high priests and the priests in general were expressly forbidden to have theirs shaved. They were neither to shave their hair according to heathen custom, nor to allow it to grow uncut like that of the Nazarites (comp. Ezek. xliv. 20). There is no other information in the Bible concerning the care of the hair.

Not all images of Jesus have Him with long hair, but all modern ones do. In fact the first images found in the Catacombs of Rome have Jesus portrayed with short hair. 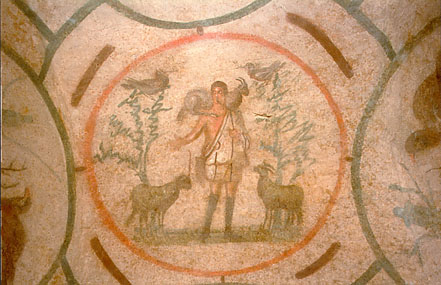 The Good Shepherd in the catacombs. One of the images represented the in the art of the catacombs is the Good Shepherd. While the model is taken from pagan culture, it immediately takes on a Christological significance inspired by the parable of the lost sheep. Christ is thus represented as a humble shepherd with a lamb on his shoulders as he watches over his little flock that is sometimes made up of only two sheep placed at his sides. - THE CHRISTIAN CATACOMBS

But why did this imagery of a Christ with short hair to a Christ with long hair come about? Well, the men in Jesus' time historically had long hair. There may have also been other factures involved as to why we only see Christ having long hair in Christian iconography. Among these are the Shroud of Turin, the Veil of Veronica, the Manoppello Image and so on, all of which are seen with Jesus as having long hair. 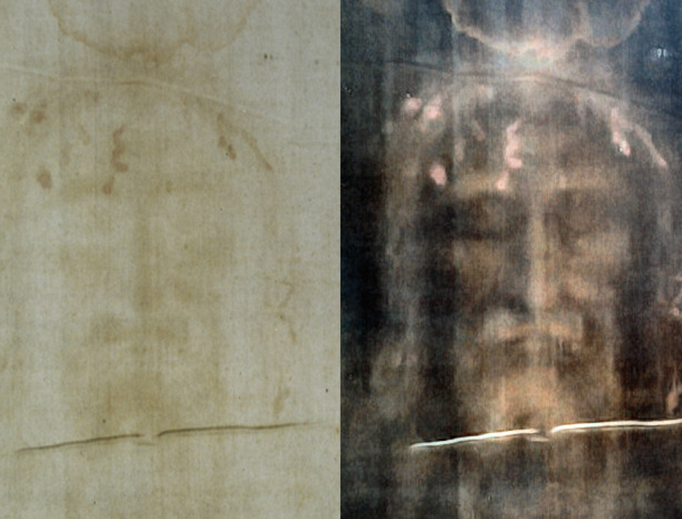 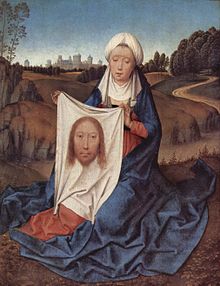 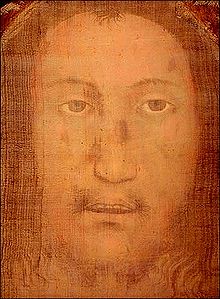 There is no Biblical support for the artist renderings of Christ having long hair. Instead, there is both historical and Biblical / scriptural support that He would have had short hair.

First, He was a carpenter by trade (Mark 6:3). Long hair would have been a danger in His work.

"14 Doth not even nature itself teach you, that, if a man have long hair, it is a shame unto him?

15 But if a woman have long hair, it is a glory to her: for her hair is given her for a covering." (KJV)

Long hair was a glory to the woman, but on a man was effeminate.

Excerpt from the post "Did Jesus Have Long Hair?":

" History shows that short hair on men has been around for a long time—much longer than many realize. At the time Jesus lived, it was the accepted and general custom. For proof, all one need do is pick up any illustrated history book relating to the period. You will find pictures of busts and statues of famous Greeks and Romans of Christ’s time. In every case, the men are portrayed with short hair similar to what we find today." Source: here

The imagery and portrayal of Christ as having long hair and a beard comes out of pagan mythology of the Byzantine era during the 4th century that appears to put Christ above and in place of the pagan god Zeus.

Excerpt from a BBC article "What Did Jesus Really Look Like?" by Joan Taylor:

"In fact this familiar image of Jesus actually comes from the Byzantine era, from the 4th Century onwards, and Byzantine representations of Jesus were symbolic - they were all about meaning, not historical accuracy.

They were based on the image of an enthroned emperor, as we see in the altar mosaic of the Santa Pudenziana church in Rome. Jesus is dressed in a gold toga. He is the heavenly ruler of all the world, familiar from the famous statue of long-haired and bearded Olympian Zeus on a throne - a statue so well-known that the Roman Emperor Augustus had a copy of himself made in the same style (without the godly long hair and beard). " Source: here

This false portrayal has been used in certain "Christian" denominations for far too long, and one wonders why they wish to portray Christ as being effeminate.

(All bold emphasis is mine.)

Not the answer you're looking for? Browse other questions tagged christology art .

0
According to Catholicism, why do we worship Christ?
8
Why is archangel Michael portrayed with a sword in art?
12
Why do images of saints often depict them with unusual hand gestures?
4
Besides St. Casimir, are any other saints portrayed with three hands in iconography?
0
Is there a concept of a theological quadrilemma with regard to the person and divinity of Jesus Christ?
7
How is Union with Christ understood across Christianity?
2
Why is Jesus Christ only one person despite having two minds?
2
Why don’t Unitarians believe that Jesus Christ pre-existed before incarnation?