Why are Lussekatter served on St. Lucy's day (i.e. why cats?)?

In researching this question I got sucked into trying to find a connection between St. Lucy's cats and the Nativity.

It got my mind wondering if they even have cats in Sweden, but then I remembered that St. Lucy was from Italy and recollecting Madeline's visit to the Eternal City, I know there are lots of cats there. However what connection this has to do with St. Lucy is beyond me. I know she had her eyes plucked out as part of her martyrdom. 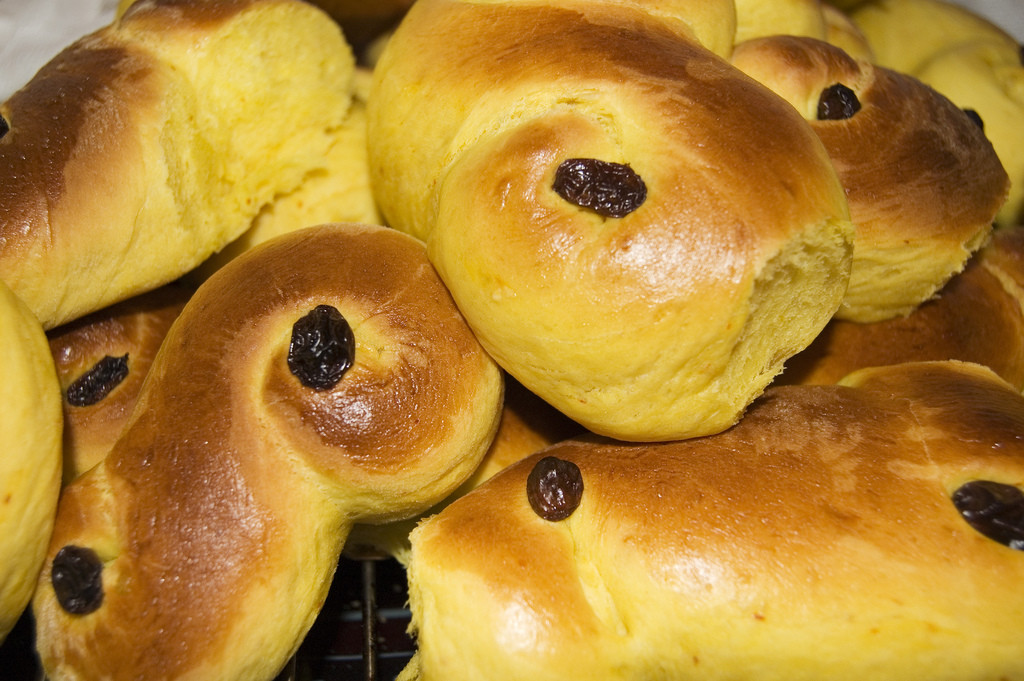 I guess I don't see how those rolls resemble cats, they do look like eyes, not necessarily cat eyes. And I think both St. Lucy and cats had an uncanny ability to see in the dark, but she wasn't a cat herself. No saints, I've been told, are in fact cats.

Is there some story about St. Lucy and cats that all the modern day hagiographers have neglected or is this just cat by association?

There are many traditions and legends many of the saints. This is especially true of many of the early Christian martyrs and St. Lucy is no exception.

First of all, Who is St. Lucy of Syracuse?

St. Lucia of Syracuse (283–304), also known as Saint Lucy or Saint Lucia (Latin: Sancta Lucia), was a young Christian martyr who died during the Diocletianic Persecution. She is venerated as a saint by the Roman Catholic, Anglican, Lutheran, and Orthodox Churches.

The oldest record of her story comes from the fifth-century Acts of the Martyrs.2 The single fact upon which various accounts agree is that a disappointed suitor accused Lucy of being a Christian, and she was executed in Syracuse, Sicily, in the year 304 during the Diocletian Persecution.3 Her veneration spread to Rome, and by the 6th century to the whole Church. The oldest archaeological evidence comes from the Greek inscriptions from the catacombs of St. John in Syracuse. Jacobus de Voragine's Legenda Aurea was the most widely read version of the Lucy legend in the Middle Ages. In medieval accounts, Saint Lucy's eyes are gouged out prior to her execution. - Saint Lucy (Wikipedia)

Some legends claim her that her eyessight was restored just before her death. This and the meaning of her name led to her connection with eyes, the blind, eye trouble, etc. 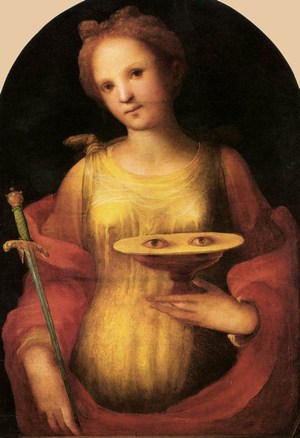 How St. Lucy became associated with cats will remain a little of a mystery for us. Nevertheless there are some small glimmers of insight here and there.

The first recorded appearance of a white-clad Lucia in Sweden was in a country house in 1764. The custom did not become universally popular in Swedish society until the 20th century, when schools and local associations in particular began promoting it. The old lussegubbar custom virtually disappeared with urban migration, and white-clad Lucias with their singing processions were considered a more acceptable, controlled form of celebration than the youthful carousals of the past. Stockholm proclaimed its first Lucia in 1927. The custom whereby Lucia serves coffee and buns “Lussekatter” dates back to the 1880s, although the buns were around long before that. - Lucia and Swedish Saffron Buns “Lussekatter"

How did devotion of St. Lucy arrive in the Scandinavian lands?

She was also known to feed her people in times of famine. A story is told that St. Lucia arrived in the Syracuse harbor in 1582, bearing wheat on a ship for the townsfolk who had prayed to her for help while they were starving. A similar story takes place in medieval Sweden. St. Lucia, “with a face so radiant that there was a glow of light all about her head,” arrived in a ship on Lake Vannern bearing provisions during a winter famine. From both of these stories comes the custom of eating wheat porridge in honor of Lucia.

Various explanations are given of how the Italian Catholic saint traveled to Lutheran Scandinavia and became firmly entrenched in Nordic culture. Did the Vikings bring the story of St. Lucia back with them on their travels? Perhaps the story was carried by German traders, or priests and monks from the British Isles may have introduced the story.

However the story arrived in the northlands, it seems clear that the name “Lucia,” from lux (light), captured Nordic hearts as she merged with their ancestral traditions of Freya and Frigga.

It was not unusual for the titles of ancient goddesses to be adopted as titles for both the Virgin Mary and for female saints. “Freya Vanadis,” meaning “shining bride of the gods,” reminds us of Lucy’s title “Lucia Bride.” Frigga was known as “Queen of the Aesir,” and St. Lucy was also called the “Lucia Queen.” Both were solar goddesses, associated with sun symbols such as sunwheels, cats, spinning, amber, and gold. Freya was called der vana solen, “the beautiful sun,” in a Swedish folksong.

The “eye” imagery of both Juno Lucina and the martyr Lucia is linked to Freya’s eyes which shed tears of amber in the ocean and gold on the earth. - Who Is Santa Lucia?

Somehow the legends of St. Lucy intermingled itself with the mythology of the Norse goddess Freya and her two cats.

The celebration of St Lucy spread over all of Europe. But the place where she is most beloved is Scandinavia, where light is especially welcome in the long hours of winter darkness. On her day, the eldest (or youngest) daughter rises before dawn and fixes a breakfast of special pastries and coffee for her family. She appears in their bedrooms, dressed in a white dress belted with a red sash, and wearing a wreath of greens and four (or seven or nine) lighted candles. Sometimes the wreath is made of green rue and decorated with red ribbons. She serves traditional pastries called lussekatter (or Lucy cats), x-shaped pastries, sometimes flavored with saffron. Other traditional foods served in her honor include saffron buns, ginger biscuits and glogg, a hot spiced wine with aquavit.

Just as the Italian Santa Lucia partakes of the qualities of Juno Lucina, the midwife aspect of Juno the Queen of Heaven, the Scandinavian St Lucia (partakes of the qualities of Freya, Queen of Heaven. Helen Farias speculates that the constellation we now know as Orion was once viewed by Celts as the great goddess Bride (the girl representing Lucy is called the Lucy Bride) and by the Northerners as the Goddess Freya. (Orion’s belt was sometimes called “Freya’s Distaff”). Many centuries ago, this constellation processed across the sky during the winter nights, setting in the west at dawn about the time the daughter dresses herself as Lucy. Freya travels across the sky in a chariot drawn by cats. (Now Orion reappears in the North American sky in December.) Perhaps Lucy’s celebration replaced earlier rites devoted to Freya, thus explaining the Lucy cats and the star-boys. - St. Lucy's Day 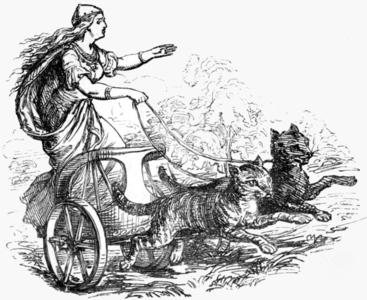 Norse goddess Freya and her cats

For the present, the actual connection of how St. Lucy became connected to Freya and her cats seems to be lost in the annuals of history.

In any case, Bon Appetite everyone! 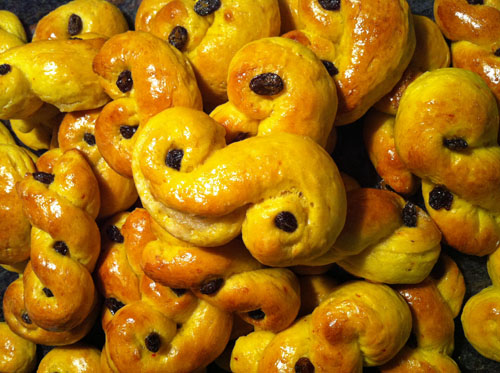 As for the traditional lussekatt - Lucia cat/saffron bun it has a thousand year history behind it. According to many mythologists the bun is in the image of the goddess Freyas favorite cat, hence the Swedish name. - Lucia in Sweden

Not the answer you're looking for? Browse other questions tagged catholicism tradition diet cats or ask your own question.

13
Why are people traditionally buried facing east?
9
Why are there fourteen stations of the cross?
16
Are there any specific food / slaughter / butchery / preparation rites in Christianity?
7
Are there any traditions regarding the non-disciple casting out demons in Jesus' name?
9
Why do Roman Catholics consider eating fish on Friday a good work?
3
Does the RCC permit Catholic laity to answer exegetical questions (i.e., interpret scripture) on a forum or website?
0
Which Apocrypha are part of the Catholic and the Orthodox traditions and which are not? Why?
6
How do the Seventh Day Adventist approach Old Testament laws?
1
Why are a Catholic bishop's Coat of Arms green and not purple?
2
Why did the Catholic Church rule out meat?