Can Prince Harry marry his fiancée by the Church of England's precepts?

Prince Harry, from the British Royal family, is to marry his fiancée. The communicate was: 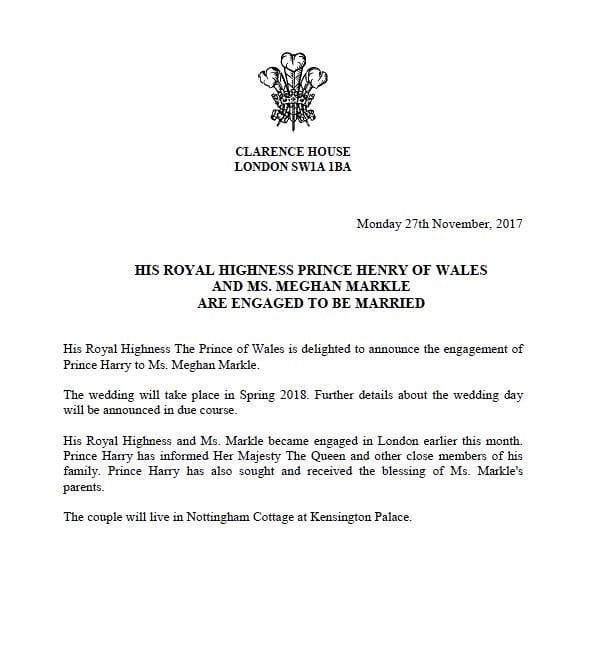 According to several newspapers (e.g. here),

A royal source said it would be “a happy church wedding”

Importantly, there is speculation/commentary in the media that Harry's fiancee is Roman Catholic.

If the latter is true, and as things stand, is it possible within the Church of England's precepts for Harry to marry his fiancée in a religious ceremony, receiving the Anglican sacrament of matrimony?

I am curious because, as far as I understand, if the reverse were true (i.e. Harry being Roman Catholic and his fiancée being Anglican, marrying in a Catholic church), such sacramental marriage is not possible.

The original question was whether a member of the C of E can marry a Roman Catholic in an Anglican ceremony, in a C of E church, according to C of E precepts. As it transpires Meghan is not RC so the example is irrelevant to the basic question. Purely according to C of E rules, so ignoring any RC precepts, the answer is yes. A Protestant and a Roman Catholic can marry in the C of E, however this does not depend on any inter-faith agreement. It is a corollary of the fact that anbody can mary in the Church of England. It is not necessary for either the bride or groom to be Christians of any kind.

There are Christian prayers, said by the vicar, but a Hindu can marry a Muslim, if they wish, in the C of E. A couple can choose to be married in the parish where either of them lives, or has previously lived, or where they have some other qualifying connection.

The right to marry in church is related to the role of the C of E as national church.

There are some exceptions, where a couple can marry according to civil law, but where a vicar is not obliged to marry them, though he has the legal power to do so if he chooses. One example was introduced by the Deceased Wife's Sister Act, 1907, which changed the law to allow a widower to marry his sister in law, but gave clergy the right not to officiate. By far the most common exception though is in the case of divorcees. A vicar has the civil power to marry divorcees, the civil right to refuse to do so, and the ecclesiastical expectation to do so only in exceptional cases.

Some clergy will simply refuse unless the couple are regular church members, in which case they may wish to ensure the divorcee understands what went wrong, was the innocent party, and understands and intends to make the appropriate commitments. Others are very accomodating.

When Princess Anne remarried she did so in the Church of Scotland, which is less restrictive. Prince Charles and the Duchesss of Cornwall married in a civil ceremony, followed by a church blessing. Although this would have been discussed at the highest level (ie his Mum, the Archbishops and Commonwealth leaders) the reasons were confidential. Prince Charles was no longer a divorcee but, technically, a widower but Camilla had made very definite commitments in a sacramental context to her former husband. Furthermore it is possible their divorce was a result of the relationship with Charles. With Meghan's previous marriage it would not be difficult to argue that her previous marriage was not intended to be the lifelong commitment which the Church understands marriage to entail. She was not baptised, her ex-husband is Jewish, although, as the marriage took place at a beach resort in Jamaica it was under the auspices of the Queen of Jamaica, aka the Supreme Governor of the Church of England, or Harry's Granny.

In recent years same-sex marriage has been introduced in England, but no vicar or other minister of the C of E can officiate. This will not, of course, be a problem for Harry and Meghan.

Until 2015, if Prince Harry had married a Roman Catholic he would have lost his place in the succession.Of course, it is still the case that if any children were brought up Catholic they could never be monarch. The change follows a similar change in Sweden in 2000.

A final complication is that the Queen can veto any of the top six in the succession from marrying for dynastic purposes. If she did veto then the marriage can go ahead, but any children would be inelligible to become king or queen. Harry is currently fifth, behid his father, brother, nephew and niece. Happily Her Majesty shows no intention of objecting.

Though she attended Catholic school as a child, Markle identified as a Protestant prior to her engagement to Prince Harry. Following her engagement, it was announced that she would be baptised and confirmed into the Church of England before the wedding. She will also become a British citizen. Despite Markle's status as an American divorcee, neither the Crown nor the Church of England have raised objections to the marriage, unlike in 1936 when Edward VIII was forced to abdicate the throne to marry Wallis Simpson; thus, Prince Harry will be allowed to keep his royal titles.

Formally joining the Church of England is to be expected.

My guess that Meghan being divorced is less of an issue because Harry is not expected to ever be king.

The Anglican and Catholic Churches issued a joint position on "mixed marriages" in 1975.

The contracting parties are the ministers of Holy Matrimony. When one party is Anglican it seems to us entirely reasonable that the parties should decide between themselves whether they shall contract marriage before a Roman Catholic minister or before an Anglican minister, and whether in a Roman Catholic or an Anglican church. Therefore we would recommend that, on condition that joint pastoral preparation has been given, and freedom to marry established to the satisfaction of the bishop of the Roman Catholic party and of the competent Anglican authority, the marriage may validly and lawfully take place before the duly authorized minister of the Church of either party. Should a minister of the Church of the other party assist in the solemnization, as he might, on the invitation of the parties and with the concurrence of the local minister, we would hope that he would be assigned an appropriate part of the rite used in that Church and not any addition to it. Again we urged the importance of good pastoral care to enable the spouses (in the words of the Pastoral Constitution of Vatican II) to “experience the meaning of their oneness and attain to it with growing perfection day by day” (Gaudium et Spes, 48) Page 8 of Anglican-Roman Catholic Commission on the Theology of Marriage and its Application to Mixed Marriages Final Report (June 1975)

Based on the joint document, both churches recognize mixed marriages, and by this agreement it is safe to say that neither church bans nor prohibits them. There should not be a problem in the nuptials proceeding as announced.

You are incorrect regarding your last presumption.

According to the current Canon Law, the sacrament of marriage is conferred on two baptized people. Since the Roman Catholic Church recognizes the Anglican baptism as using proper Trinitarian form and water, it is a simple matter of adhering to the guidelines contained therein and thus seeking (and most likely receiving) the waiver/dispensation (as I did; I married a Catholic when I was not Catholic). It's not that hard. It can be a difficulty of one of the parties is not willing to accept the three points listed below. (My room mate from college had initial objections when was to marry a young lady who was Catholic and he was not, but they worked it out as part of the pre Cana process).

Can. 1124 Without express permission of the competent authority, a marriage is prohibited between two baptized persons of whom one is baptized in the Catholic Church or received into it after baptism and has not defected from it by a formal act and the other of whom is enrolled in a Church or ecclesial community not in full communion with the Catholic Church.

Can. 1125 The local ordinary can grant a permission of this kind if there is a just and reasonable cause. He is not to grant it unless the following conditions have been fulfilled:

1/ the Catholic party is to declare that he or she is prepared to remove dangers of defecting from the faith and is to make a sincere promise to do all in his or her power so that all offspring are baptized and brought up in the Catholic Church;

3/ both parties are to be instructed about the purposes and essential properties of marriage which neither of the contracting parties is to exclude.

There is an American side guide to "Anglican/Roman Catholic" mixed marriage guidance, but I did not find an equivalent guide for the home of the Anglican faith.

Not the answer you're looking for? Browse other questions tagged marriage church-of-england or ask your own question.