Is the Pope allowed to notarize various Vatican documents?

The pope can do many things and certainly has much moral authority. Hence, it sounds reasonable for the pope to be able to notarize (certify) Vatican documents. Also in history, many notaries were appointed by the pope (according to the German Wikipedia).

However, in a discussion we were not able to find evidence supporting or contradicting the claim that the pope can notarially certify documents.

Even though for most people this question is only of theoretical relevance, we nevertheless had the impression that it is interesting.

Is the Pope allowed to notarize various Vatican documents?

As the Head of State of Holy See (Vatican), the pope can notarize various documents within the Vatican, especially Papal Documents written by the reigning pontiff. In such cases, the pope would use the Ring Of the Fisherman to confirm an official document written by himself.

The pope's signet ring is one of two papal seals used in documents. The other one is a leaden bull (bulla).

The earliest mention of the Fisherman's Ring worn by the popes is in a letter of Clement IV written in 1265 to his nephew, Peter Grossi. The writer states that popes were then accustomed to seal their private letters with "the seal of the Fisherman", whereas public documents, he adds, were distinguished by the leaden "bulls" attached. From the fifteenth century, however, the Fisherman's ring has been used to seal the class of papal official documents known as Briefs. The Fisherman's Ring is placed, by the cardinal camerlengo on the finger of a newly elected pope. It is made of gold, with a representation of St. Peter in a boat, fishing, and the name of the reigning pope around it. - The Catholic Encyclopedia 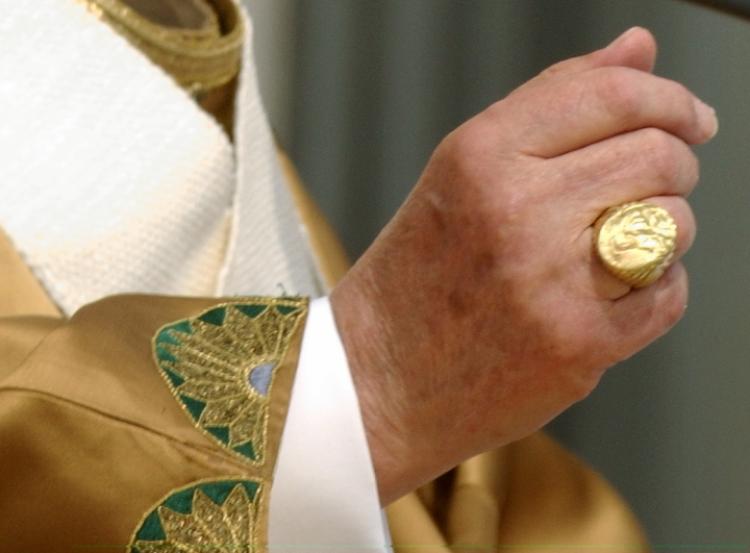 Pope Benedict's signet ring will be destroyed using special silver papal hammer to ensure documents it was used to sign will not be forged.

Not the answer you're looking for? Browse other questions tagged papacy law .

16
Is the Pope allowed to publish books after resignation?
9
The Pope is resigning. How does a living pope confer his authority?
29
Does the pope get paid for being the pope?
7
Why does the Pope include himself among the sinners?
9
Vatican approved miracles?
8
When Pope Francis dies, is Pope Benedict automatically the 'new' leader for a short period?
5
Why did the Bishop of Rome accept (and retains until today) the title "Pontifex Maximus" and how were the rights and duties transferred/transformed?