Were celebrations for the 400th Anniversary of the Reformation held in Germany during World War I?

The 400th anniversary of Luther posting his 95 Theses was October 31, 1917. At this point, Germany was suffering heavy losses in World War I, and the war would continue until November 11th of the following year.

Were celebrations for the 400th anniversary held in Germany during World War I?

In 1917, Reformation Day was on a Wednesday. The German theologian Hermann Sasse, a sergeant in the German army at the time, spoke about that day in 1942. His glasses are too amazing for my conscience to allow me to answer without including this picture, taken the year before he died: 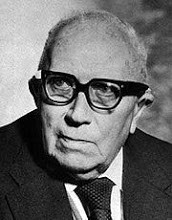 In any case, the troops celebrated communion. Given that it was a Wednesday, not a Sunday, we can assume it was in celebration of Reformation Day. Here's what Sasse said:

I still remember that cloudy, misty Autumn morning in northern Germany. The Divine Service in the open air would be for many of those present their last celebration of holy communion. Straight after the celebration, we were plunged into one of the bloodiest battles of Flanders..Surely that Jubilee deserved something better. But with it there arose a new appreciation of the central article of faith of the Lutheran Reformation. It is as though the tremendous gravity of war, the encounter with death and the experience of God's judgment that it brought, were needed for modern man to grasp again the message of the Reformation: the justification of the ungodly by faith alone.

In an interview, Hartmut Lehmann talked about how the German government used Reformation Day as a political tool:

The later anniversaries, 1817, 1883 and 1917, were guided by nationalism. Luther's heroisation was mainly directed against Catholic France. Luther was depicted as the typical German, the one who had made possible the national unification and the rise of Germany to a superpower...

The motivations have changed, but the degree of instrumentalisation has always been extraordinarily high. For example, in 1917, during the final phase of WW1, no phrase was too strong to exploit Luther's memory for the purpose of propaganda in order to make the Germans continue to believe in gaining victory over their enemies.

There was also a different take on the situation. Historian Max Lenz gave a lecture on Reformation Day 1917 in Hamburg, Germany titled "Luther and the German Spirit." He questioned whether the war really was in keeping with the legacy of Luther. Here's what he had to say:

Would Luther recognize our war as his own? Is there a bridge that leads from Luther's religion to the new Germany, to the life interests and ideals we are fighting for, to the things we hold sacred?

Not the answer you're looking for? Browse other questions tagged church-history martin-luther reformation germany or ask your own question.