Is an out-of-the body-experience (OBE) possible according to the Catholic Church?

If an out-of-the body-experience (OBE) is the situation that the soul leaves the body for a while, could this be possible as the Catholic Church states that body and soul are actually one entity.

Etymologically, "ecstasy" means "to stand outside of oneself," which could be what's meant by "outer body experience."

Ecstasy is, according to Fr. John Hardon, S.J.'s Catholic Dictionary:

In general, the state of being beside oneself through some overpowering experience. As a mystical phenomenon, it includes two elements, one interior and the other exterior. The invisible element consists in the mind being riveted on a religious subject. The corporeal aspect means that the activity of the senses is suspended, so that not only are external sensations unable to influence the soul, but these sensations become very difficult to awaken. Many saints have received ecstasies as a supernatural gift from God, although ecstasy of itself is not a criterion of holiness. (Etym. Greek ekstasos; from ex, out + histanai, to cause to stand: existanai, to derange.)

Many saints (e.g., St. Teresa of Ávila, St. Catherine of Siena, et al.) have experienced ecstasy where their bodies look as though they are dead, but they are really rapt in divine contemplation. St. Paul, for example, seems to have had an ecstasy, and he seems to have described a man who had ecstasies (2 Corinthians 12:2-4):

It is possible, philosophically.

Paul's description, as pointed out by Geremia, is likely referring to himself- in which he experienced something but didn't know if it was bodily or non-bodily. This language assumes that both are possible. If your perspective is that the Bible is true and fact, and an authoritative description of an event is recorded, then the conclusion must be that it is possible to be reality, and not just experience.

I performed a cursory search through the Catechism of the Catholic Church on Vatican's website, and didn't find any direct results. You may be able to find related articles that indirectly address the issue.

Is an out-of-the body-experience (OBE) possible according to the Catholic Church?

The short answer is yes, even if not on an official level. Please note that my yes is not taking into account ecstatic experiences of Catholic mystics, which has an official stance within the Church and is dealt with in Geremia’s excellent answer.

Some years ago, I had the privilege to hear a conference on the episcopal experiences of Archbishop Raymond-Marie Tchidimbo. Pope John Paul II called him a living martyr due to the suffering he experienced while in a communist prison.

On day, he after being tortured by electrocution, he became unconscious and his tormentors threw his body outside and into the middle of the street. Mgr. Tchidimbo then had an out-of-the-body experience in which he somehow saw his body lying on the ground he started to go through a long tunnel towards an immense light. He was totally at peace.

The communists at this particular time, had a change of heart in the fact that they did not want to have a martyr on their hands, so a doctor injected a drug into his heart which revived him physically.

Bishop Tchidimbo some time later wrote about his eight (8) years in solitary confinement in prison under the communists. His near-death experience, is equally recounted in his book: [Noviciat d'un évêque: huit ans de captivité sous Sékou Touré (Novitiate of a Bishop: Eight Years in Captivity under Sékou Touré; Paris: Fayard). It is not for the faint hearted.

Then there is the famous story of Fr. Steven Scheier, a American priest from Kansas, who also had a near-death-experience. His was rather unpleasant to say the least.

A priest in 1985, had his own NDE. He remembers being before the throne and being condemned to Hell. It was only at the pleading of a female voice, whom he knows to be Mary, that the judgement was suspended, and he was sent back to change his life.

In his interior locution Fr Scheier heard Jesus say he was not happy with the state of his life as a priest and his mother Mary promised to intercede for him so that his life would be more pleasing to her Son.

On why he was allowed to live, Fr Scheier responds: “My mission is to let you know that Hell exists and we as priests are liable to it.” He was left with the deep knowledge that His Divine Mercy is unfathomable; His mercy outweighs justice. - The Catholic Church and near-death experiences

If you still have doubts about out-of-body experiences and the Catholic Church, you will not convince those in Spain that it does not happen, especially in the town of Las Nieves, Spain.

The Fiesta de Santa Marta de Ribarteme also known as 'The Festival of Near Death Experiences' occurs annually on the 29th July in the town of Las Nieves, Spain.

The festival started as a way for the local people to celebrate overcoming a near death experience, although it has grown over the years and now draws reasonably large crowds and participants from further afield.

The people lucky enough to have survived a near death experience within the 12 months prior to the festival, are carried through the town to the church of Santa Marta inside their very own coffins. The loved ones carrying the coffins are all dressed in funeral attire and chant hauntingly as they proceed to the church.

A mass is carried out inside the church to pay respects to Santa Marta, (the Saint brought back from the dead by Jesus) and then celebrations ensue. Storytelling, fireworks and gypsy dance bands fill the streets for the rest of the day.

The Fiesta de Santa Marta de Ribarteme goes back to the 12th century. 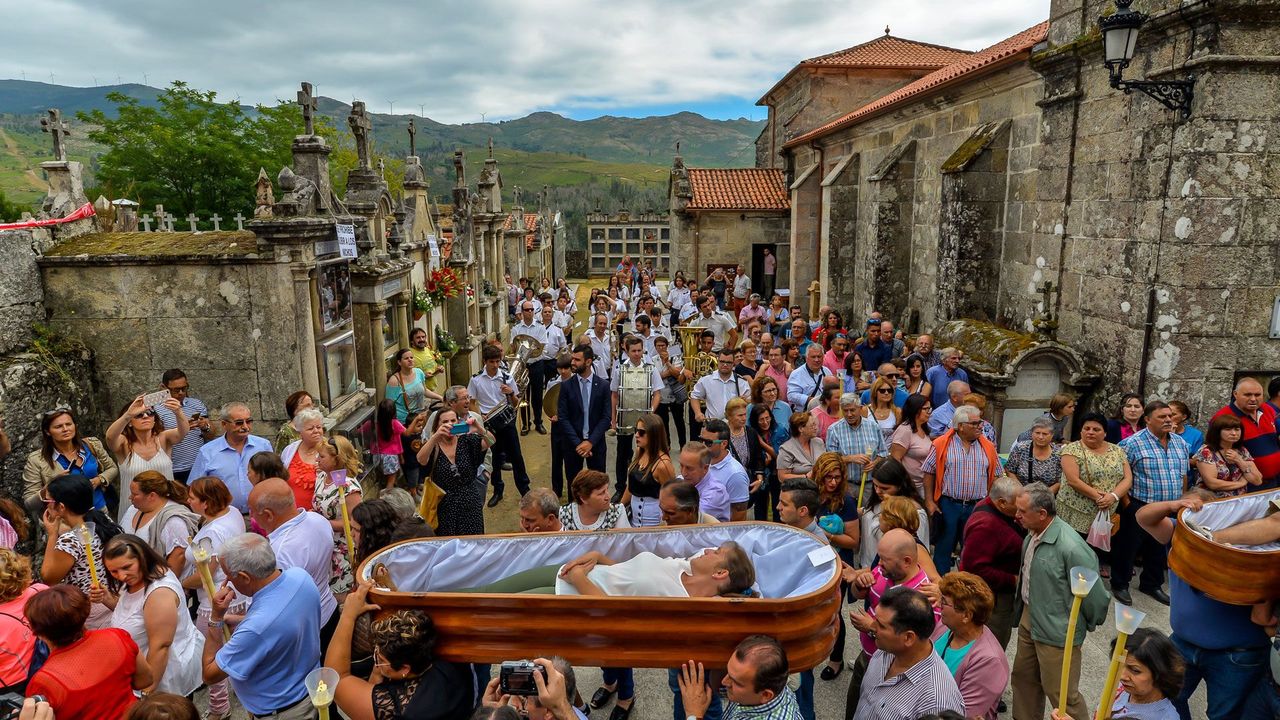 Here follows Wikipedia’s definition on what an out-of-body experience is:

An out-of-body experience (OBE or sometimes OOBE) is a phenomenon in which a person perceives the world from a location outside their physical body. An OBE is a form of autoscopy (literally "seeing self"), although this term is more commonly used to refer to the pathological condition of seeing a second self, or doppelgänger.

Those experiencing OBEs sometimes report (among other types of immediate and spontaneous experience) a preceding and initiating lucid-dream state. In many cases, people who claim to have had an OBE report being on the verge of sleep, or being already asleep shortly before the experience. A large percentage of these cases refer to situations where the sleep was not particularly deep (due to illness, noises in other rooms, emotional stress, exhaustion from overworking, frequent re-awakening, etc.). In most of these cases subjects perceive themselves as being awake; about half of them note a feeling of sleep paralysis.

Another form of spontaneous OBE is the near-death experience (NDE). Some subjects report having had an OBE at times of severe physical trauma such as near-drownings or major surgery. Near-death experiences may include subjective impressions of being outside the physical body, sometimes visions of deceased relatives and religious figures, and transcendence of ego and spatiotemporal boundaries. Typically the experience includes such factors as: a sense of being dead; a feeling of peace and painlessness; hearing of various non-physical sounds, an out-of-body experience; a tunnel experience (the sense of moving up or through a narrow passageway); encountering "beings of light" and a God-like figure or similar entities; being given a "life review", and a reluctance to return to life.

Along the same lines as an NDE, extreme physical effort during activities such as high-altitude climbing and marathon running can induce OBEs. A sense of bilocation may be experienced, with both ground and air-based perspectives being experienced simultaneously.

An interesting side issue here is the Lazarus syndrome:

Lazarus syndrome (the Lazarus heart), also known as autoresuscitation after failed cardiopulmonary resuscitation, is the spontaneous return of a normal cardiac rhythm after failed attempts at resuscitation. Its occurrence has been noted in medical literature at least 38 times since 1982. It takes its name from Lazarus who, as described in the New Testament, was raised from the dead by Jesus after four days.

Occurrences of the syndrome are extremely rare, and the causes are not well understood. One hypothesis for the phenomenon is that a chief factor (though not the only one) is the buildup of pressure in the chest as a result of cardiopulmonary resuscitation (CPR). The relaxation of pressure after resuscitation efforts have ended is thought to allow the heart to expand, triggering the heart's electrical impulses and restarting the heartbeat. Other possible factors are hyperkalemia or high doses of epinephrine.

"Astral travel" and lucid dreaming, if not God-willed, are not good. I advise you not to try it! Some demonic obsessions and possessions were due to practicing lucid dreaming. You can ask Catholic exorcists on that or read about what they have to say on these matters.

If you are attempting to leave your body by yourself, you probably do so without God's permit. If God wanted you to leave your body, God Himself would pull you out of your body like there is an example in the Bible (the apostle Paul described someone who was taken to Heaven, whether in body or in soul he didn't know). If you really want to see Heaven (or Hell or Purgatory) or your guardian angel, ask God to show them to you in a dream for instance. But don't try to exit your body on your own!

Not the answer you're looking for? Browse other questions tagged catholicism out-of-the-body-experience .

6
On what grounds does the Catholic church reject sacraments of protestant denominations?
7
According to Catholic doctrine, would a cloned human being have a soul?
8
What is the consequence of being baptized twice, according to the Catholic Church?
5
Does Catholicism teach that Trinity is reflected in Man?
9
In the Catholic Church, what are the options for a person whose spouse abandons them?
1
Was Mary given a glorified or "spiritual body" like the resurrected body of Jesus while on earth?
1
Is the dignity of man pertains to his soul only or to the wholeness of his being meaning body & soul?
3
Does the Catholic Church believe that we become just souls after we die?