Could Jesus have sweated actual blood in the garden of Gethsemane? [closed]

The Jews therefore, because it was the preparation, that the bodies should not remain upon the cross on the sabbath day, (for that sabbath day was an high day,) besought Pilate that their legs might be broken, and that they might be taken away. Then came the soldiers, and brake the legs of the first, and of the other which was crucified with him. But when they came to Jesus, and saw that he was dead already, they brake not his legs: But one of the soldiers with a spear pierced his side, and forthwith came there out blood and water. And he that saw it bare record, and his record is true: and he knoweth that he saith true, that ye might believe. For these things were done, that the scripture should be fulfilled, A bone of him shall not be broken

Modern medical experts explain the "blood and water" to actually be separated hemoglobin and plasma, the two major constituents of whole blood, which separate after death.

Then Luke, a physician himself, wrote in his gospel account, chapter 22, verse 44:

And being in an agony he prayed more earnestly: and his sweat became as great drops of blood falling down to the ground.

So the question is in the title: Could Jesus have sweated actual blood in the garden of Gethsemane?

Yes. Modern medical knowledge confirms the condition and the cause reported by the physician Luke using the word egeneto to describe how sweat became blood.

Turns out that recently the National Institutes of Health issued this report:

Hematohidrosis is a very rare condition in which an individual sweats blood. It may occur in an individual who is suffering from extreme levels of stress. Various causative factors have been suggested like component of systemic disease, vicarious menstruation, excessive exertion, psychogenic, and unknown causes. Fear and intense mental contemplation are the most frequent causes.

Taken in context it is clear he was certainly in "intense mental contemplation."

In studying the Interlinear of this section, the answer seems to be that his sweat becomes blood drops: 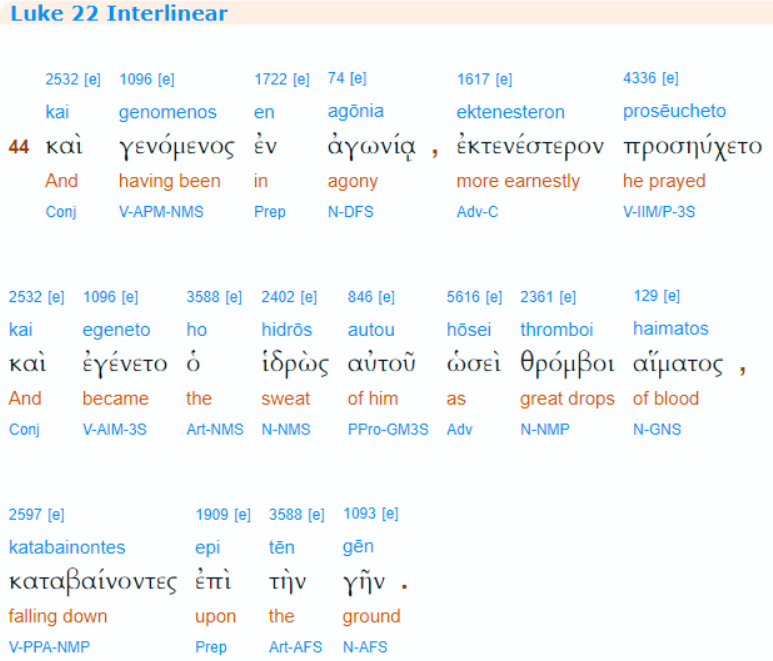 Is it correct to conclude that what is described in Luke 22:44 is a case of the medical phenomenon called hematidrosis ( bloody sweat)?

As is mentioned in @Nigel J comment the verse is drawing a comparison of how Jesus had sweat that dropped like blood. It is describing the action of the dripping sweat not saying that the sweat was tinged with blood or had some coloration like blood. Certainly a stretch to say the verse is indicative of Jesus' sweat containing certain fractional components found in the chemical make up of blood.

Jesus in Gethsemane. Concerning Jesus Christ when in Gethsemane on the final night of his earthly life, Luke 22:44 states: “But getting into an agony he continued praying more earnestly; and his sweat became as drops of blood falling to the ground.” The writer does not say that Jesus’ sweat was actually mingled with his blood. He may only have been drawing a comparison, perhaps indicating that Christ’s perspiration formed like drops of blood or describing how the dripping of Jesus’ sweat resembled a drop-by-drop flowing of blood from a wound. On the other hand, Jesus’ blood may have exuded through his skin, being mixed with his sweat. Bloody sweat has reportedly occurred in certain cases of extreme mental stress. Blood or elements thereof will seep through unruptured walls of blood vessels in a condition called diapedesis, and in hematidrosis there is an excreting of perspiration tinged with blood pigment or blood, or of bodily fluid mingled with blood, thus resulting in the ‘sweating of blood.’ These, of course, are only suggestions as to what possibly took place in Jesus’ case.

Not the answer you're looking for? Browse other questions tagged exegesis gospel-of-luke or ask your own question.

6
What is the significance of Luke 22:44 where Christ's sweat was as great drops of blood in the garden of Gethsemane while he prayed?
4
When Christ was pierced with the spear, why did water come out?
5
What are the historical arguments against a literal interpretation of Luke 22:44?