Why did St. Martin give half of his cloak, and didn't give the whole?

There was a saint called St. Martin, from the city of Tours (France) He gave half of his cloak to a poor he saw, because he felt pity for him, it was cold, and the beggar was more or less in rags.

I see the lesson in this story, but what I wonder is why he only gave half of his cloak, why not the whole coat?

I wonder if it was a real act, or an allegory (sharing when you have very little), but giving the whole wouldn't have been even more generous?

What is the (Catholic) Church's opinion about this story? Is this story known outside the Catholic Church?

Sulpicius (or Sulpitius) Severus was a younger contemporary of St. Martin, being 34 years old when Martin died. He wrote, amongst other things, a biography of St. Martin. The story of the cloak is in Chapter Three.

This chapter relates how, in an extremely cold winter, there was a beggar outside the city of Amiens, about 75 miles North of Paris. He is described as being "destitute of clothing" and was beseeching everyone who passed by to have compassion on him, but nobody did.

Martin, that man full of God, recognized that a being to whom others showed no pity, was, in that respect, left to him. Yet, what should he do? He had nothing except the cloak in which he was clad, for he had already parted with the rest of his garments for similar purposes. Taking, therefore, his sword with which he was girt, he divided his cloak into two equal parts, and gave one part to the poor man, while he again clothed himself with the remainder.

So Martin had already given away his other garments, which would normally be worn under a cloak. If he had given the beggar the whole cloak Martin would have left himself naked.

Severus goes on to describe the reaction of onlookers

Some of the bystanders laughed, because he was now an unsightly object, and stood out as but partly dressed. Many, however, who were of sounder understanding, groaned deeply because they themselves had done nothing similar. They especially felt this, because, being possessed of more than Martin, they could have clothed the poor man without reducing themselves to nakedness.

It would have been possible for other people, who had not already given away their undergarments, to assist the beggar much more easily than Martin could.

That night Jesus appeared to Martin in a vision:

In the following night, when Martin had resigned himself to sleep, he had a vision of Christ arrayed in that part of his cloak with which he had clothed the poor man. He contemplated the Lord with the greatest attention, and was told to own as his the robe which he had given. Ere long, he heard Jesus saying with a clear voice to the multitude of angels standing round— ‘Martin, who is still but a catechumen, clothed me with this robe.’ The Lord, truly mindful of his own words (who had said when on earth— Inasmuch as you have done these things to one of the least of these, you have done them unto me), declared that he himself had been clothed in that poor man; and to confirm the testimony he bore to so good a deed, he condescended to show him himself in that very dress which the poor man had received.

OP asks if it was real or an allegory. There is nothing in the biography to suggest this was an allegory. It is told as something which really happened.

Even though giving the beggar the whole cloak would have left Martin naked himself, wouldn't that have been even more noble than just giving half?

May St. Martin help us to understand that only by means of a common commitment to sharing is it possible to respond to the great challenge of our times: to build a world of peace and justice where each person can live with dignity

The Pope referred to sharing and dignity. Martin and the beggar both needed clothing. They had one cloak between them, so Martin decided they would share it. He treated the beggar as an equal, so each had half a cloak. How would the beggar have felt if he had been given the whole cloak, and seen Martin reduce himself to the beggars former position? He would have felt embarrassed and undignified, a mere object of Martin's largesse. In sharing there is dignity and equality. Martin did not say he didn't care about himself, he showed that he cared about the beggar just as much as himself.

St. Martin did many things, but the incident with the cloak is by far the best known. It is a frequent subject in art, and as KorvinStarmast says, El Greco did a very famous painting of it. In the Orthodox Church Martin is known as Martin the Merciful. His feast day is November 11th, and this day was traditionally marked across Europe in Protestant and Catholic countries alike. He is (I think) the only human saint whose day has a specific name in English: Martinmas. It's position in the year was partly responsible as it marked the end of the harvest, New wine was ready then, and indeed Martin is a patron saint of alcoholics.

In Germany the carnival traditionally began at 11.11 am on this day. Martin had been a reluctant soldier and the Armistice, bringing to an end the fighting in the Great War, took place on his day in 1918.

I've just found a site, I had known but forgotten this possible answer, they say that, as a Roman soldier, only half of the coat was his. So he didn't want to give the part that was not his (a kind of anti-Robin Hood).

But my question stay open. I don't know if it's the real historical and theological answer.

Why did St. Martin give half of his cloak, and didn't give the whole?

The only thing St. Martin could give this beggar was half his cloak! But in doing so, St. Martin had to practice the virtue of prudence at the same time.

Having lived in the region of Tours for over a decade and after having the privilege of visiting his tomb in Tours itself, I can assure you that in winter it can get very cold. For St. Martin to have given away his whole cloak could have meant that he could have frozen to death in wintertime.

I have never heard of anyone thinking that this incident should be thought of as allegorical. The Church has constantly maintained this story to be true.

While Martin was a soldier in the Roman army and stationed in Gaul (modern-day France), he experienced a vision, which became the most-repeated story about his life. One day as he was approaching the gates of the city of Amiens, he met a scantily clad beggar. He impulsively cut his military cloak in half to share with the man. That night, Martin dreamed of Jesus wearing the half-cloak he had given away. He heard Jesus say to the angels: "Martin, who is still but a catechumen, clothed me with this robe." (Sulpicius, ch 2). In another version, when Martin woke, he found his cloak restored to wholeness. The dream confirmed Martin in his piety, and he was baptised at the age of 18.

The part kept by himself became the famous relic preserved in the oratory of the Merovingian kings of the Franks at the Marmoutier Abbey near Tours. During the Middle Ages, the supposed relic of St. Martin's miraculous cloak, (cappa Sancti Martini) was carried by the king even into battle, and used as a holy relic upon which oaths were sworn. The cloak is first attested in the royal treasury in 679, when it was conserved at the palatium of Luzarches, a royal villa that was later ceded to the monks of Saint-Denis by Charlemagne, in 798/99. - Martin of Tours (Wikipedia) 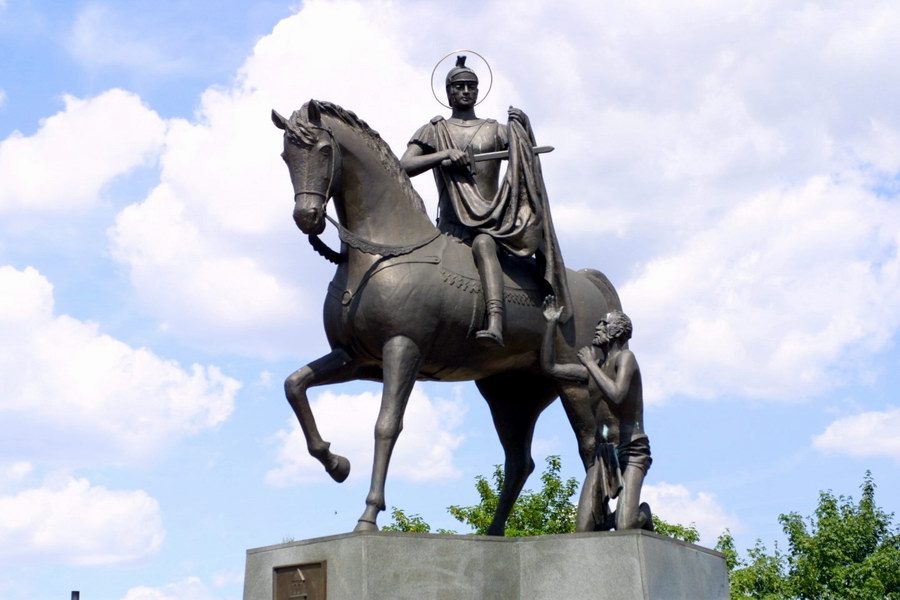 Monument to Saint Martin of Tours in Odolanów, Poland

Roman soldiers carried their cloaks with them at all times and where used to keep themselves warm at night in wintertime.

Two types of cloaks were used, the sagum and the paenula. Both were made from wool, which insulated and also contained natural oil to repel water. They were fastened with a fibula. The paenula was hooded in colder climates. Since every common soldier slept in the open, it was important that he have a warm full-length wrap, but necessary that he carry it with him each day regardless of his activities. This was accomplished by a cloak of more than body length, double-folded so that it did not fall beneath the knees when worn. An excellent illustration of this is the statue of Caesar Augustus atop the theater in the Roman city of Orange, in what is now France. - Roman military personal equipment

Regarding whether the account was known outside the Roman Catholic Church, in addition to the other answer you received in a comment I would add that the account is also well known within the Eastern Orthodox Church, where St. Martin is also commemorated (on October 12th).

An account in his life can be found in the relatively recent compilation of Lives of the Saints by Nikolai Velimirovič (1881-1956):

Martin was born of pagan parents in the Pannonian town of Sabaria in the year 316. His father was a Roman officer, and the young Martin was given over to military service against his will. By then, however, he was already a catechumen in the Christian Church. From early childhood he had loved the Church with all his heart. One winter, while traveling with his companions to the town of Amiens, he saw a beggar before the town gates, almost naked and shivering from the cold. Martin felt sorry for him, and fell behind his companions. He then removed his military cloak and cut it in two with his sword. He gave one half to the beggar and wrapped the other around himself, and left. That night, the Lord Jesus Christ appeared to him in a dream, wrapped in the other half of his cloak, and said to His angels: “Martin is only a catechumen, yet behold: he has clothed Me with his garment!” Leaving the army, Martin was immediately baptized, and then baptized his mother. He was then tonsured a monk in the diocese of St. Hilary of Poitiers and led a life of true asceticism. Martin was exceptionally humble, for which God endowed him with an abundant gift of working miracles, such that he raised the dead and drove out evil spirits. Martin was appointed Bishop of Tours against his will. After abundant labor in the vineyard of the Lord, and after a difficult struggle with pagans and Arian heretics, St. Martin gave his holy soul into the hands of his Lord in the year 397 (The Prologue of Ohrid; Sebastian Press, 2012).

Not the answer you're looking for? Browse other questions tagged catholicism saint or ask your own question.

13
Does God lie? And does the devil tell the truth?
2
Why aren't Moses, Elijah, and other Old Testament heroes of faith given the title of “Saint”?
7
In RC doctrine, when is pop culture, like Bernstein's Mass, appropriate to tell sacred messages?
3
Why is St Martin “in-the-Fields”?
3
Why did Paul VI strip József Mindszenty of his archbishopric?
9
How did Isidore of Seville become the patron saint of the Internet and computer programmers?