Most paintings seem to portray St. Joseph as an old man and his wife St. Mary as much younger. Abp. Fulton SheenŌĆöarguing in "The World's Happiest Marriage" that "Joseph was probably a young man, strong, virile, athletic, handsome, chaste, and disciplined"ŌĆögives the example of Guido Reni, who "pictured Joseph as an old man with white hair": 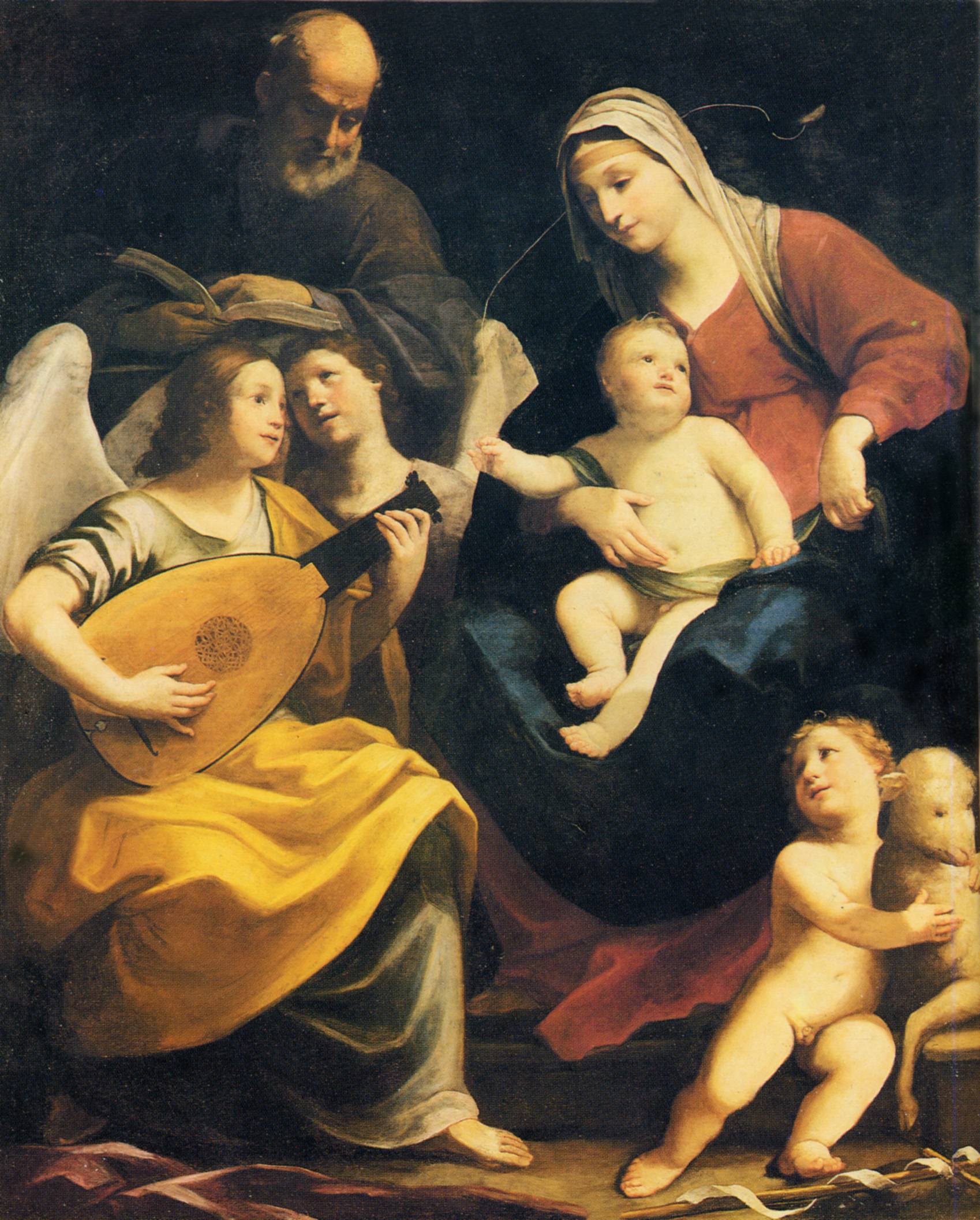 There are numerous paintings depicting the foster father of Our Lord as a relatively young man. In fact, this seems to be one of those traditions within the Church that does not have a strong historical backing to it. It seems to be more of a popular tradition than actually related to Sacred Tradition.

Saint Joseph in the teachings of Saint Josemar├Ła

From his earliest writings, Saint Josemar├Ła describes Saint Joseph as a young man, perhaps a bit older than our Lady, but imbued with vigor and strength: "The Holy Patriarch was not an old man, but a young, strong, upright man, a great lover of loyalty, a man with fortitude. Holy Scripture defines him with a single word: just (see Mt 1:20-21). Joseph was a just man, a man filled with all the virtues, as was fitting for the one who was to be God's protector on earth."

Underlying these words is the conviction that God, on giving a vocation, gives the graces suitable to the one who receives it, and therefore he adorned Saint Joseph with all the gifts of nature and grace that made him a suitable spouse of our Lady and head of the Holy Family.

Saint Josemar├Ła's emphasis on the youthfulness of Joseph finds support in three fundamental reasons: in reading Sacred Scripture with common sense (which presents his espousal to our Lady as something normal, and the marriage of a young girl with an old man would not have been viewed as normal); in the communion of spirits proper to marriage (the love existing between them); and above all in the conviction that holy purity is not a question of age, but rather stems from love. 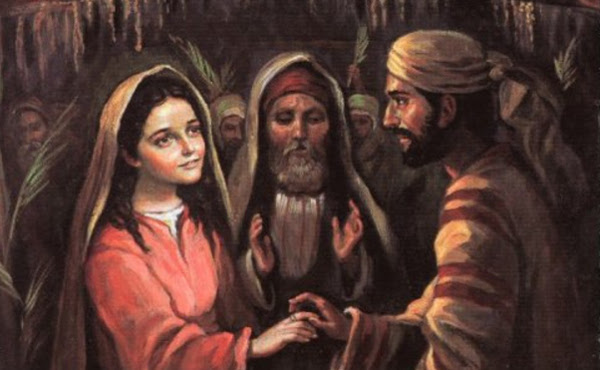 "I don't agree with the traditional picture of St Joseph as an old man, even though it may have been prompted by a desire to emphasis the perpetual virginity of Mary. I see him as a strong young man, perhaps a few years older than our Lady, but in the prime of his life and work. You don't have to wait to be old or lifeless to practice the virtue of chastity. Purity comes from love; and the strength and joy of youth are no obstacle for noble love. Joseph had a young heart and a young body when he married Mary, when he learned of the mystery of her divine motherhood, when he lived in her company, respecting the integrity God wished to give the world as one more sign that he had come to share the life of his creatures."

For Saint Josemar├Ła it was "unacceptable" to present Joseph as an old man for the purpose of silencing the "evil thinkers." And it was equally unacceptable to doubt the truth of his marriage to our Lady, as well as to fail to take into consideration the love that existed between them. 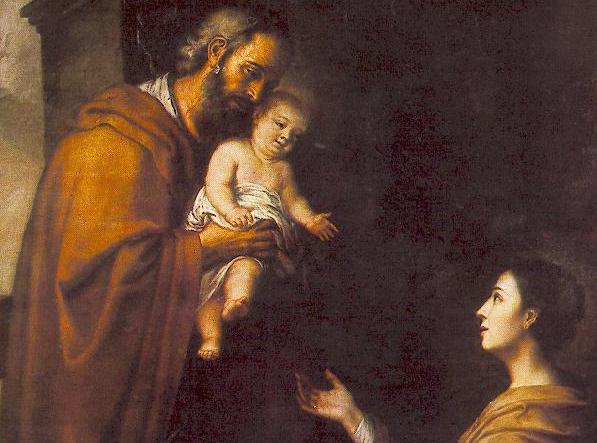 Saint Josemar├Ła was enamored of Joseph's life of work, and he considered him a teacher of interior life in that life of intense and humble work. "For he teaches us to know Jesus and share our life with him, and to realize that we are part of God's family. Joseph "can teach us these lessons, because he is an ordinary man, a family man, a worker who earned his living by manual laborŌĆöall of which has great significance and is a source of happiness for us." The figure of Saint Joseph also speaks to us of the need to be always apostolic, for he knew how to turn his work into an opportunity to "make Jesus known." - Saint Josemaria and the Role of Saint Joseph in Christian Life

In Bartolom├® Esteban MurilloŌĆśs painting of the Holy Family with Bird, c. 1650, St. Joseph is portrayed as a relatively young man. 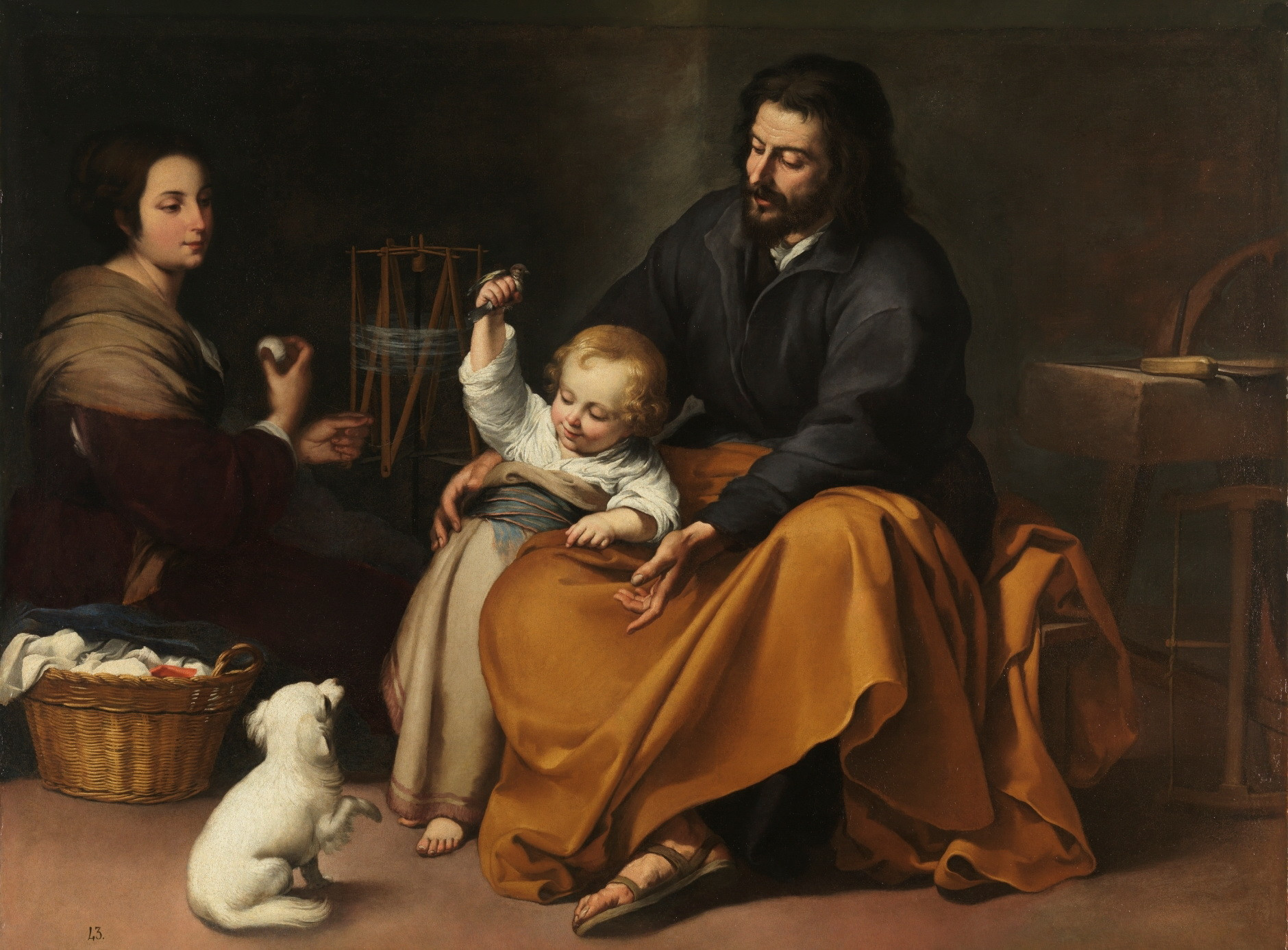 During the Middle Ages, Joseph the senior citizen became a stock figure in literature and art. Portrayals of Joseph as old and grey reached their height in Renaissance and Baroque-era paintings, such as Guido ReniŌĆÖs 1640 ŌĆ£St. Joseph and the Christ Child,ŌĆØ in which a kindly, grandfatherly Joseph cradles the baby Jesus in his arms. Such images were a far cry from the earliest depictions of the saint. In the 5th century mosaics at RomeŌĆÖs Basilica di Santa Maria Maggiore, Joseph appears hale and hearty and somewhat buff, in keeping with his stated profession in the Gospels as a tekton, a Greek word which could mean carpenter, but might more accurately be translated into modern English as ŌĆ£construction worker.ŌĆØ - Joseph WasnŌĆÖt Twice MaryŌĆÖs Age. 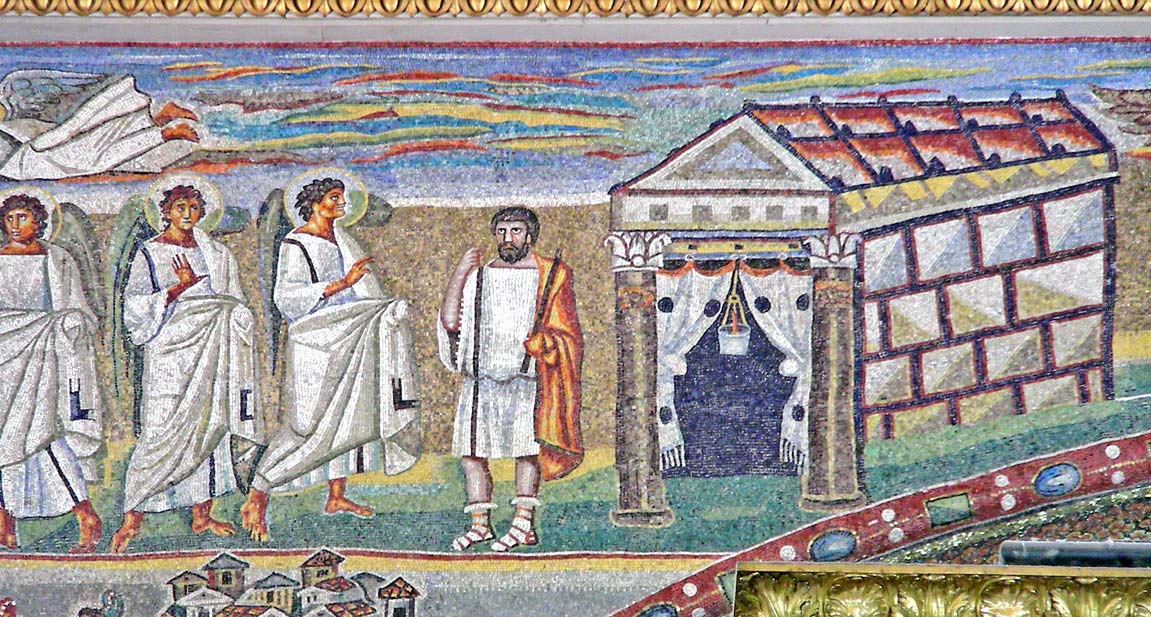 The Matthean annunciation to Joseph is represented in seamless transition from the Lukan annunciation to Mary. The greater prominence given to the annunciation to Mary suggests a prioritization of Luke over Matthew in chronology and significance, though both announcements are parallel. The rod held in JosephŌĆÖs hand derives from the Infancy Gospel of Matthew, and it symbolizes JosephŌĆÖs divine commission as MaryŌĆÖs protector. - S. Maria Maggiore, Rome

St. Joseph and St. John numerous portrait depicting and older man is good way for the artist to convey an image of a chaste man. We know that a young man struggles to control the urges of flesh which is associated to concupiscence.Even St. Paul who experienced mystical conversion still had to struggle with the law of the flesh.

21 So I find this law at work: Although I want to do good, evil is right there with me. 22 For in my inner being I delight in GodŌĆÖs law; 23 but I see another law at work in me, waging war against the law of my mind and making me a prisoner of the law of sin at work within me. 24 What a wretched man I am! Who will rescue me from this body that is subject to death?

Artist depicting a young man would convey doubts, if St. Joseph can be able to hold on his Church given title invoking his powerful intercession on the following litanies;

Illustrious Scion of David, Light of Patriarchs, Spouse of the Mother of God, Chaste guardian of the Virgin, Foster-father of the Son of God, Watchful defender of Christ, Head of the Holy Family,

Mirror of patience, Lover of poverty, Model of workmen, Example to parents, Guardian of virgins, Pillar of families, Solace of the afflicted, Hope of the sick, Patron of the dying, Terror of demons, Protector of the Church, pray for us.

Prayers and Litany of Saint Joseph

From the Litany of St. Joseph which the Church acknowledged, it depicted a young and strong worker and defender. It is nowhere described St. Joseph as an old man.Let's see how Blessed Catherine Emmerich describe the appearance of St. Joseph before marrying the Blessed Virgin Mary.

Then I saw that messengers were sent throughout the land and all unmarried men of the line of David summoned to the Temple. When these were assembled in large numbers at the Temple in festal garments, the Blessed Virgin was presented to them. Among them I saw a very devout youth from the region of Bethlehem; he had always prayed with great fervor for the fulfillment of the Promise, and I discerned in his heart an ardent longing to become MaryŌĆÖs husband. She, however, withdrew again into her cell in tears, unable to bear the thought that she should not remain a virgin.

MARRIAGE OF THE BLESSED VIRGIN TO JOSEPH (Catherine Emmerich)

Based on the sketch drawing of the vision of Blessed Catherine Emmerich, if we based it on the caricature of the face and try to match it with available painting the closest I found of a young image of St. Joseph is this one; 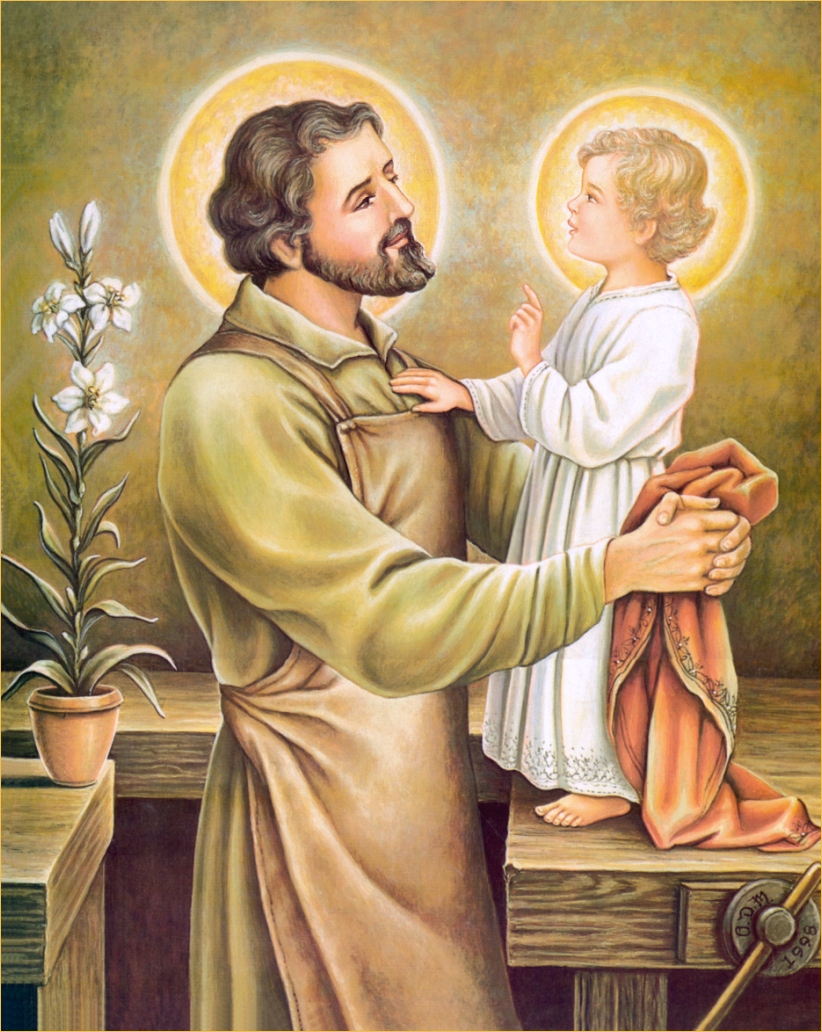 The biblical account of St. Joseph in the "Flight into Egypt" following the angel command for him to accompanied Jesus & Mary to travel by foot from Jerusalem to Egypt, an old man could not make it physically. Not to mentioned they will return to Jerusalem after King Herod death by foot again. Also, carpentry works requires physical strength which St.Joseph teaches for 18 long years Jesus hidden life in Galilee.

In closing, St. Joseph depicted by so many artist as an old does not represent his true physical appearance but more of an artist way of presenting a just man living a chaste life. An old man depicted and acknowledge by the world as already passed or no longer interested in the affairs of the flesh.

Not the answer you're looking for? Browse other questions tagged virgin-mary art joseph holy-family .

9
What does spikenard have to do with St Joseph?
7
What did Mary and Joseph do with the gold, frankincense, and myrrh?
6
Do any Christian groups believe that Joseph built the pyramids to store grain in?
14
Is there more than one Joseph in the Bible?
5
How old was St. Joseph when he married the Blessed Virgin Mary?
2
Why was the name of St Joseph not mentioned at Luke 2: 19?
1
Why was the Holy Family instructed to flee to Egypt?
4
Does anyone know the name of the pharaoh that Joseph brought his family to meet?
3
How did Mary know after the Annunciation that she would be accepted as wife by Joseph?