What are the Biblical arguments against man having an immortal soul separate from the body?

Belief in an immortal soul seems quite common in Christianity although some denominations do not seem to believe in this.

What specific scriptures, and scriptural arguments, are used by those that do not believe in humans having an immortal soul separate from the body?

Update: this is not a duplicate of this other question because this one is specifically asking for support for the opposite viewpoint. Additionally the other question has only answers which support the idea that humans do have a soul. If this has to be scoped to a particular denomination, I choose Jehovah's Witnesses.

I am answering from the perspective of Jehovah's Witnesses.

In the Bible, the word for soul is ne'phesh in Hebrew, and psy'khe in Greek. Their definitions generally convey the concept of "a breathing creature" or "a living being". Many of the scriptures I mention in this answer may not use the word "soul" in their English translations, but will use one of these similar terms such as "life", "person", "creature", or "body". I've denoted these words with the word "soul" in brackets next to them.

Adam wasn't given a soul, he became a soul.

And the LORD God formed man of the dust of the ground, and breathed into his nostrils the breath of life; and man became a living soul. - Genesis 2:7 (KJV)

The soul can die.

He must not enter a place where there is a dead body ["soul"]. He must not make himself unclean, even for his father or mother - Leviticus 21:11 (NIV)

All the days that he separateth himself unto Jehovah he shall not come near to a dead body ["soul"]. - Numbers 6:6 (ASV)

And they smote all the souls that were therein with the edge of the sword, utterly destroying them: there was not any left to breathe: and he burnt Hazor with fire. - Joshua 11:11 (KJV)

Samson said, “Let me ["my soul"] die with the Philistines!” Then he pushed with all his might, and down came the temple on the rulers and all the people in it. Thus he killed many more when he died than while he lived. - Judges 16:30 (NIV)

Animals are souls, and die the same way.

Then God said, “Let the waters teem with swarms of living creatures ["souls"], and let birds fly above the earth in the open expanse of the heavens.” - Genesis 1:20 (NASB)

For the fate of the sons of men and the fate of beasts is the same. As one dies so dies the other; indeed, they all have the same breath and there is no advantage for man over beast, for all is vanity. - Ecclesiastes 3:19 (NASB)

8 The second angel sounded his trumpet, and something like a huge mountain, all ablaze, was thrown into the sea. A third of the sea turned into blood, 9 a third of the living creatures ["souls"] in the sea died, and a third of the ships were destroyed. - Revelation 8:8-9 (NIV)

There is also a non-biblical argument against the immortality of the soul, and that is that the teachings originated from Socrates and Plato, and was later incorporated by Christian Greek philosophers.

For more information, there is What Is the Soul? and Insight, Vol. 2.

The concept of soul as an immaterial part separate from the human body does not exist in the Bible but was adopted into Christianity from Greek philosophy.

In Old Testament (OT) the Hebrew word that is commonly translated "soul" (but, depending on translation, sometimes as "living soul", "living creature", and other variants) is "nep̄eš". This is the word used in locations such as Genesis 2:7 (KJV) to refer to humans:

And the Lord God formed man of the dust of the ground, and breathed into his nostrils the breath of life; and man became a living soul.

And in locations such as Genesis 2:19 (KJV) to refer to animals:

And out of the ground the Lord God formed every beast of the field, and every fowl of the air; and brought them unto Adam to see what he would call them: and whatsoever Adam called every living creature, that was the name thereof.

In the same manner the New Testament (NT) uses the term "psykhe" to refer to a person as a living being. For example, Romans 11:3 says:

Lord, they have killed thy prophets, and digged down thine altars; and I am left alone, and they seek my life.

The soul in the OT means not a part of *man, but the whole man - man as a living being. Similarly, in the NT it signifies human life: the life of an individual, conscious subject...Consequently, for the Israelite, man dies when his nepeŝ leaves him..., and death is somehow a diminution of life, a loss of life. The NT remains faithful to this understanding of death. 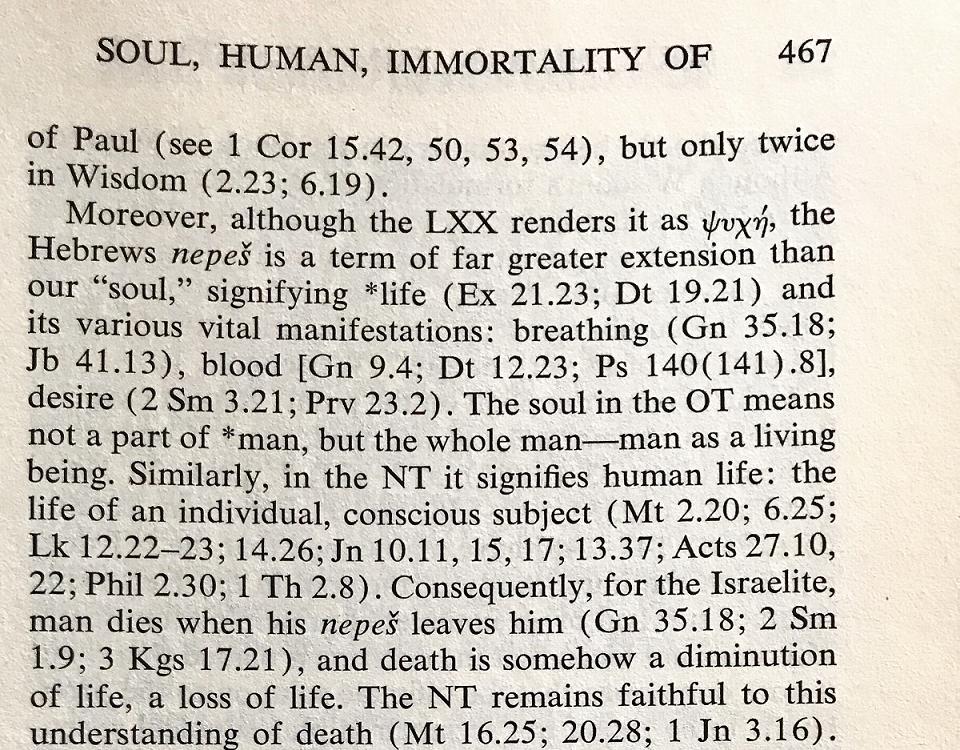 Likewise, the same encyclopedia says in Vol. 4, p.669, in the article DEAD, THE (IN THE BIBLE) that ancient Israelites 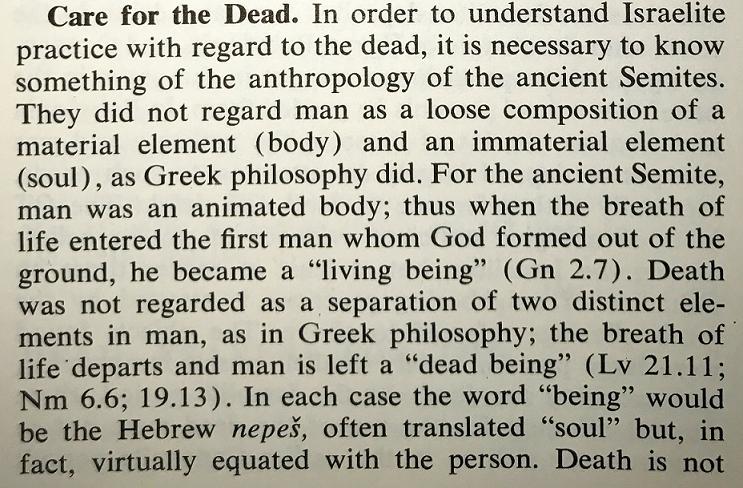 This same encyclopedia also attributes the development of the concept of an immortal soul to Middle Platonism. In Vol. 13, p.454, the following is said in the article SOUL, HUMAN (emphasis added):

The resulting doctrine of the soul as a substance made for union with the body, yet subsistent in itself, rational, incorporeal, simple, and immortal, was far different from the teachings of the early Greek philosophers. Plato and Aristotle seem to have had little direct influence in the formation of such a concept; when their doctrine was adduced, it was usually subject to criticism. Neoplatonism received less attention than one might expect. It is more probable that Middle Platonism, which flourished in the first Christian centuries, furnished Clement, Origen, and later writers with key ideas. 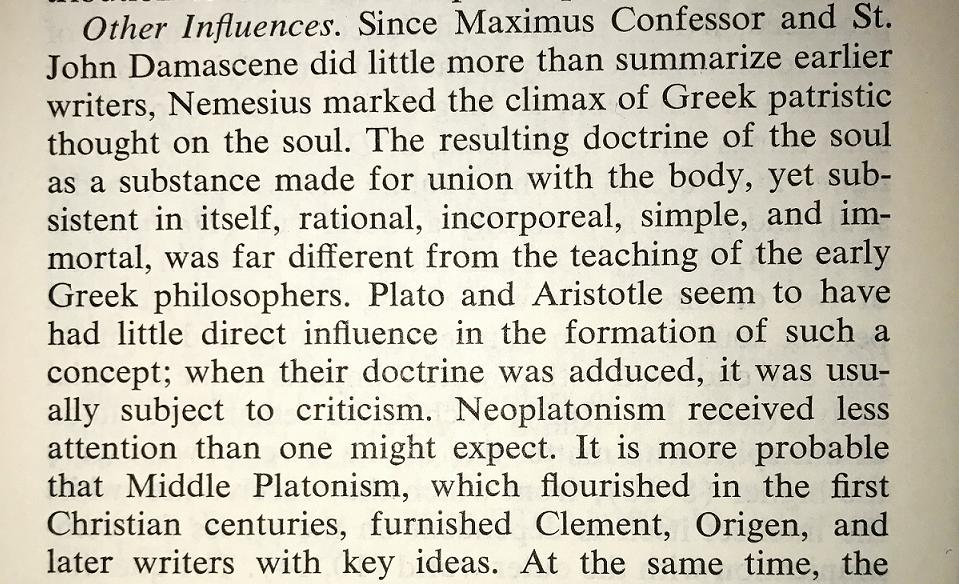 As the New Catholic Encyclopedia admitted (above), the notion that a human person has a soul (let alone an immortal soul) is not found in either the Old Testament or the New Testament. This is because even the apostles, who had been trained by Jesus, believed in the same concept of afterlife as did Moses and the Old Testament prophets.

The ideas that a person has a separate soul, and the later addition that the soul is immortal, were developed long after the death of the apostles. Writers such as Clement and Origen based these ideas not on the Bible but on pagan Greek philosophies.

The most commonly used argument is an argument from absence. Nowhere in the Bible does the phrase "immortal soul" exist. Further, nowhere in the Bible are the two words used in distinct connection. What is written however is that God is immortal and is often contrasted with humans as "mere mortals".

Another common argument is from Genesis. They argue for the creation formula: body + breath of life = living soul. When you die, the body returns to the earth and the life returns to God, therefore the soul is no more.

Even the most quoted verse in all Christendom is used for support. John 3:16 contrasts that God has given eternal life, but you would perish without him. It does not say that eternal life is taken from the wicked. Eternal life is given to the righteous.

Additional support is found in Revelation as well. A reasonable argument can be made that the wicked are destroyed in "the second death".

These arguments are made by Annihilationists, such as Seventh Day Adventists and Jehovah's Witnesses. Their respective official sites are filled with information on this topic.

One line of argument against the immortality of the soul is:

The penalty for sin is death:

Genesis 2:17 (KJV) But of the tree of the knowledge of good and evil, thou shalt not eat of it: for in the day that thou eatest thereof thou shalt surely die.

Genesis 3:19 (NASV) By the sweat of your face You will eat bread, Till you return to the ground, Because from it you were taken; For you are dust, And to dust you shall return.

But is this only about death of the body or also death of “the soul” or “spirit”?

Many other translations use breath in stead of spirit here, the original word is ruach. This scripture tells that the spirit or ruach is equal for man and beast, and that they equally can die so, it is not immortal. But the word for "spirit" is not the same as commonly used for "soul".

The original word used for soul here is nephesh. Thus also a nephesh can die so is not immortal. What about the soul in Greek?

Matthew 10:28 “And you shall not be afraid of those who kill the body that are not able to kill the soul; rather be afraid of him who can destroy soul and body in Gehenna.” (Aramaic Bible in Plain English)

The original word here translated with soul is psuche. Also a psuche can die, so it is not immortal.

Since it is written in the bible that (some) souls can die or be destroyed, a possible inference is that a soul is not immortal. By logic this does however not imply that all souls will die, neither that all souls are mortal. Note that the previous words for soul are also used for God (Leviticus 26:11, Hebrews 10:38) of who is written that he alone is immortal (1 Timothy 6:16,17). Furthermore since the gift of Got is eternal life, also human souls can be “upgraded” to eternal ones

Romans 6:23 (KJV) For the wages of sin is death; but the gift of God is eternal life through Jesus Christ our Lord.

eternal life can be considered different (but almost as good) as an immortal soul, as possible in the future according to 1 Corinthians 15:54. This scripture could be interpreted referring to a time in the future when death will no more exist, such that all souls will be immortal.

1 Corinthians 15:54 (NIV) When the perishable has been clothed with the imperishable, and the mortal with immortality, then the saying that is written will come true: "Death has been swallowed up in victory.

Summarising: This is an example of a line of argument against the believe in immortality of all human souls, without making the distinction between having a soul and being a soul, as was given in one of the other answers. The discussion of biblical support for or against the existence of an immaterial (either mortal or immortal) soul separately from the body is another (interesting) topic.

Not the answer you're looking for? Browse other questions tagged biblical-basis jehovahs-witnesses souls immortality .