What's the significance of this image for Jehovah's Witnesses?

I was browsing through the friends of one of my Facebook friends. One of them is, I am guessing, a Jehovah's Witness because some of their posts have Jehovah's Witness-related entries such as photos of Kingdom Halls. One of the images I saw under his account was the following: 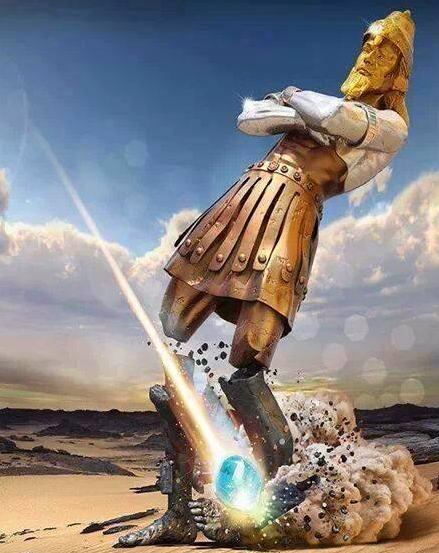 There was no explanation with this image, so I thought I would ask about it here.

If this is from Nebuchadnezzar's dream (as commented by user bradimus) then what is the JW interpretation of the dream or at least of this image in the dream?

This is a depiction of the "immense image" recorded at Daniel 2:31-35.

The last publication released which discussed the immense image was the June 2012 Watchtower as discussed in Nathaniel's answer. Before that, there was the book, "Pay Attention to Daniel's Prophecy".

For Jehovah's Witnesses, the immense image is a symbol of how God's Kingdom will soon bring an end to the world powers that have prevailed throughout history alongside God's people. In particular, they believe that the feet of iron and clay symbolize the Anglo-American World Power (Britain and the United States). There will be no more world powers after this.

The prophecy about the immense image is also closely linked to several other prophesies in the Bible. On pages 12 & 13, the Watchtower mentioned above includes a diagram of how these prophesies are related.

The article also includes a picture of the immense image being struck at its feet.

This looks very much like a modern portrayal of the dream of Nebuchadnezzar, as explained by the prophet Daniel in Daniel 2:

31 “You saw, O king, and behold, a great image. This image, mighty and of exceeding brightness, stood before you, and its appearance was frightening. 32 The head of this image was of fine gold, its chest and arms of silver, its middle and thighs of bronze, 33 its legs of iron, its feet partly of iron and partly of clay. 34 As you looked, a stone was cut out by no human hand, and it struck the image on its feet of iron and clay, and broke them in pieces. 35 Then the iron, the clay, the bronze, the silver, and the gold, all together were broken in pieces, and became like the chaff of the summer threshing floors; and the wind carried them away, so that not a trace of them could be found. But the stone that struck the image became a great mountain and filled the whole earth. [ESV]

The image shows the different colors of the different parts of the statue, the special "stone" (clearly not cut by human hands), the shattering of the feet, and the beginning of the wind carrying away the rubble (as seen in the cloud of debris).

Daniel goes on to interpret the dream in the following verses, describing several earthly kingdoms, and then explaining the significance of the stone:

44 And in the days of those kings the God of heaven will set up a kingdom that shall never be destroyed, nor shall the kingdom be left to another people. It shall break in pieces all these kingdoms and bring them to an end, and it shall stand forever, 45 just as you saw that a stone was cut from a mountain by no human hand, and that it broke in pieces the iron, the bronze, the clay, the silver, and the gold. A great God has made known to the king what shall be after this. The dream is certain, and its interpretation sure.”

Nothing in this image makes it specifically related to Jehovah's Witnesses. In a sense it is relevant to all Christians, and (probably) even Jews.

All that said, Jehovah's Witnesses apply a particular interpretation to the feet of the image, connecting them to "Anglo-America" (as shown here). This then has significant implications for the eschatology of Jehovah's Witnesses.

This "Anglo-America," a conglomeration of Britain and the United States that emerged in World War I, represent the mixture of iron and clay. As an article in the Watchtower says,

Jehovah’s servants have long sought to understand the symbolic meaning of the feet of the image. Daniel 2:41 describes the mixture of iron and clay as one “kingdom,” not many. The clay, therefore, represents elements within the sphere of influence of the Anglo-American World Power, elements that make it weaker than the solid iron of the Roman Empire. The clay is referred to as “the offspring of mankind,” or the common people. (source)

This identification is crucial, because it helps identify when Christ will return:

We can conclude that the Anglo-American World Power is the one that will be dominating when the “stone” representing God’s Kingdom hits the feet of the image.

Thus the stone striking the image in Daniel is a representation of the return of Christ, which shatters the worldly kingdoms (including the one currently in power – that of Anglo-America). His coming in particular will result in the destruction of all false religion, particularly "the churches of Christendom":

The Anglo-American World Power will be the dominant world power when false religion is eradicated. The prophecies of Daniel and John have been fulfilled to the smallest detail. We can be confident that the destruction of false religion and the battle of Armageddon will soon come.

So according to Jehovah's Witnesses, this image represents the imminent establishment of God's Kingdom, which will put an end to false religion and and human governments.

I hope this sheds even more light on this subject: This is from the online JW library:

22. How does the dream image help us to see that we are deep in the time of the end?

22 Careful study proves that we are deep in the time of the end, for we have reached the dream image’s feet of iron and clay. Some present-day governments are ironlike or authoritarian, whereas others are claylike. Despite the fragile nature of clay, of which “the offspring of mankind” are made, ironlike rulerships have been obliged to let the common people have some say in the governments ruling over them. (Daniel 2:43; Job 10:9) Of course, authoritarian rule and the common people stick together no better than do iron and clay. But God’s Kingdom will soon bring an end to this politically fragmented world.—

This kingdom is spoken of at Daniel 2:44.

2:44 “In the days of those kings the God of heaven will set up a kingdom+ that will never be destroyed.+ And this kingdom will not be passed on to any other people.+ It will crush and put an end to all these kingdoms,+ and it alone will stand forever,+ 45 just as you saw that out of the mountain a stone was cut not by hands, and that it crushed the iron, the copper, the clay, the silver, and the gold.+ The Grand God has made known to the king what will happen in the future.+ The dream is true, and its interpretation is trustworthy.”

This is a reference to the kingdom that Jesus taught his followers to pray for:

Not the answer you're looking for? Browse other questions tagged exegesis jehovahs-witnesses art daniel .

1
How do different denominations defend their interpretations of Daniel 2's prophecy?