Many people come to different conclusions around the seventy year exile prophesied I. Jeremiah 25:11. Some say they were 360 day prophetic years, others say "seventy years" is a phrase to mean a generation.

The dates for the captivity vary, ranging from 606 BC to 536 BC. Wikipedia and others say the exile lasted from 605 BC to 537 BC. That's 68 years. However, with those dates I've realised that, although it only makes 68 solar years, it makes 70 lunar years.

I know the Hebrew calendar is lunar based, with a typical year consisting of twelve lunar months and having an additional 13th month once the first month drifted from Spring (when the first month is supposed to occur). These leap months are now mathematical, consistent, and predictable, but back in the time of ancient Israel these leap months were off the cuff, only occurring of the high priest said so at the end of the twelve months. Therefore I'm assuming there had to be some general idea of what a "year" actually was, time wise. Otherwise people will could make pledges for X years without any knowing of how many months they had pledged for.

So maybe when Jeremiah prophesied the 70 year exile, the Jews at the time could've understood that as being a time duration of 70 typical years, or 70x12 months.

Is this argument plausible? What are your opinions?

I've looked into the Talmud for answers and it appears that there is a difference between someone making a pledge for "a year" or "this year" and someone making a pledge for "one year". "This/a year" would mean for the rest of the year, even if that year turned into a leap year, whereas "one year" indicates 12 lunar months. I don't know how "seventy years" would be viewed as in the Talmud.

The Hebrew calendar is actually a luni-solar one (https://en.wikipedia.org/wiki/Hebrew_calendar).

It is based not only on the moon, but also by the sun. The reason is the moon revolves slower around the earth (about 29-30 days) than the earth around the sun (about 365.25 days). This means that roughly every three years, the Hebrew calendar "added" a month (called intercalary month) of 29-30 days to bring the lunar time back in line with the sun's time.

This lunar/solar necessity is spelled out clearly in Ex. 12:2 (This month shall be unto you the beginning of months: it shall be the first month of the year to you.) It is the beginning of months (plural). This, in combination with the barley first fruit wave sheaf offering (Lev. 23:10) and other seasonal feasts. If they merely followed the moon cycle, within a couple of years there would not be barley to wave, nor to harvest 50 days later at Pentecost (Lev. 23:15-22). So, they "added" the month to bring "agriculture time" back into the moon and sun alignment so they could follow the commandments.

This necessity and time keeping is also clearly found centuries later with Josephus in his Antiquities of the Jews Book 3 Chapter 10.5 ("5. In the month of Xanthicus, which is by us called Nisan, and is the beginning of our year, on the fourteenth day of the lunar month, when the sun is in Aries,"). The alignment time was thus marked as the spring equinox. This means they required the new moon and full moon to both be after the Spring Equinox. The sun would be in Aries and alight the new moon also in Aries.

So, the Seventy Years is in fact 70 years as measured by the rotation past the Spring Equinox and not by the lunar months (30 days or 360 days) alone.

The prophecy of Jeremiah’s 70 years has two aspects, but unfortunately, commentators conflate them with each other. A few years after the Assyrian Empire collapsed, he made his extraordinary prediction that the incoming empire of Babylon would last seventy years then it too would end. His word came true to the very year! Babylon fell to the Medes and Persians in October 539 BC, seventy years after the demise of Assyria in 608 BC. (Nineveh was lost in 612 BC but Assyria's last stand was the city of Harran in 608 BC)

However, there is a ‘dual fulfilment’ aspect to this prophecy, one describing Babylon's duration (Jeremiah 25:8-14), and the other describing Jerusalem lying desolate for a concurrent 70 years. (2 Chronicles 36:1-21) Below is a diagram showing the date of Jeremiah’s prophecy and the two counts of 70 in fulfilment of his word: 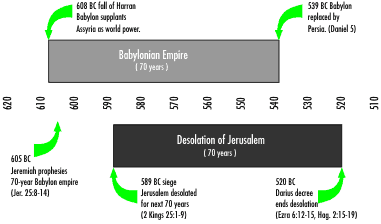 The two predictions were offset from each other because Babylon's start was 608 BC, whereas the siege of Jerusalem started 17th December 589 BC. Then, the count of seventy pertaining to Jerusalem lasted until 18th December 520 BC when Haggai marked it as the end of Jerusalem's punishment. "The vine, the fig tree, the pomegranate, and the olive tree have yielded nothing, but from this day on I will bless you." (Haggai 2:19) This seventy year period is confirmed by Haggai’s contemporary a few months later in Zechariah 1:12.

A problem arises when we count the days between the dates given. From the siege until Haggai’s finish-point is 25202 days exactly. Divide that by 365.242 and it comes to a precise 69 years. So, what was the 70th year? There are three explanations offered, and anyone interested in this subject must choose between them.

My personal view is number #2.

I never could believe in a 360 day prophetic year. God would not use a length of year that did not apply to the years contained within the prophesy. I do believe that ancient years used to consist of 360 days. See an article on this subject at http://xwalk.ca/360vs365.html.

I also think of the 70 years a little different than most. I believe it has to do with the time Israel was without a Temple, Jeremiah 25:11, says the land will be a desolation and a horror. I believe that happened when the Temple was destroyed in 586 BC. In the Book of Haggai Chapter 1, even after some of the Israelites returned the land was unproductive until the Temple was completed in 516 BC (Ezra 6:15). Thus from 586 BC to 516 BC is 70 years.

Not the answer you're looking for? Browse other questions tagged prophecy chronology jeremiah .

0
How do mainstream Christians handle the Epistle of St. Barnabas' prophecy that Jesus will return in the next 50 years?
6
Why is there not a single date in the Bible?
2
Reason for the references to Christ hundreds of years before first century, in Book of Mormon
3
Did Prophet Jeremiah's soul pre-exist his conception in human form?
4
Why do some Christians interpret Daniel's 1260 day prophecy as days and not years?
3
How do Jehovah's Witnesses justify their interpretation of Daniel chapter 4 given the specificity of the text?
2
Which decree is the correct interpretation of Daniel 9:25?
5
How do Jehovah’s Witness support their belief that Jesus started ruling (invisibly) from heaven in 1914? What has been happening in those 107 years?