A full preterist is someone who believes that all the prophecies in the Bible have been fulfilled.

Then I saw thrones, and seated on them were those to whom judgement was committed. Also I saw the souls of those who had been beheaded for their testimony to Jesus and for the word of God, and who had not worshiped the beast or its image and had not received its mark on their foreheads or their hands. They came to life, and reigned with Christ a thousand years.

How does a full preterist interpret the Thousand-year reign of Christ?

I take a more scientific approach to this. I believe this is simply a period of exponential growth of Christianity.

In order to explain this, I need to establish the beginning and the end given the context. I like to start with the end, because I am weird like that.

Christianity had a reign of 1000 years before heaven and earth are made anew in Rev 21:1, where "Heaven and earth" is used poetically to mean "everywhere". This speaks of complete desolation, a barren land, as is the case after war. We know this because of the previous chapter, where it talks about Gog and Magog ending the 1000 year reign and then getting fire from heaven thrown down on them. The Turks conquered Jerusalem in 1073 AD and were hit with fire from heaven.

The prior chapters to Revelation 20 deal with a very specific instance, an event that was fulfilled with the destruction of the Temple in 70 AD. A preterist takes the stance that John was writing this prior to the Temple's destruction.

However, Jerusalem isn't 100% ruled by Christians between 70 AD and 1073 AD. In fact, it was under Muslim rule for some time after the Byzantine empire. Thus, it isn't a political interpretation but one of religious interpretation.

The percentage of the Christian world population was on the rise during this time. Christianity absolutely exploded. The science I talk about in the beginning is one of social science and statistics. Exponential growth always follows a pattern as it reaches maturaity, an S-Curve or Sigmoid curve. This is well known in business marketing as a company reaches market saturation. You have slow growth, it picks up speed, then slows back down, and reaches a plateau or crest as the market or population becomes saturated.

This is quite common in populations, because once a thing like religion spreads, it can only go so far - the maximum population. You can only convert the maximum of 100% of people. The threshold for Christianity is probably a lot lower than 100% as given by the analogies Jesus gives for choosing the narrow path. If it is greater than the widest path, it is therefore not the correct path.

The thousand years I interpret as a period of exponential growth as a % of the population. This growth actually looks more linear according to my sources, though these are estimates. You will notice, the exponential growth seems to stop around 1100 AD (closest to 1073 AD) and experiences a slowing down of growth where it reaches a peal in present day of around 31.7%. 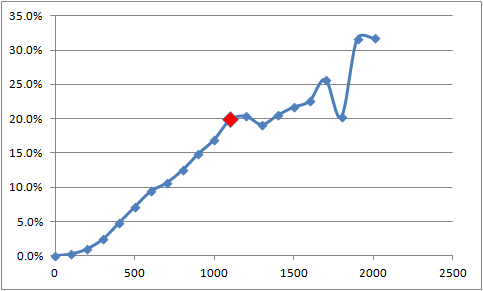 Thus, the 1000 year reign is one of exponential Christian growth between the Jerusalem's conquest in 70 AD in the Jewish-Roman war to 1073 AD when the Turks conquered Jerusalem. It's not exactly 1000 years, but I'm sure you could make a case for corresponding millennial events.

That puts us in the new heaven and earth age. God's systems are pretty much set up. Christianity continues to bless the world by association (salt of the earth) at 31.7% and the dead are continuously judged as Revelation 20 dictates. Some may even say that is the reason for the plethora of near-death experiences seeming a lot like the New Jerusalem. I'll leave that up to the parapsychologists.

There are many misconceptions about Revelation which have been ingrained through centuries of casual surface reading, if not outright propaganda. And, this is one of the most misunderstood. The text does not say that the 1,000 years is a reign of Christ. It says that those beheaded for the witness of Christ would reign with Him for a thousand years.

These martyrs had been beheaded, so they were dead. The righteous dead have passed from mortal life to immortal life, so they were not living on earth any more. They went to be with Christ, and Christ had ascended to the Father after He had appeared to His disciples for a few days (Acts 1:9). As Christ was in heaven, then so were the martyrs in heaven with Him, and the time that they would reign with Him from heaven would be a 1,000 years.

The "thousand" in Rev. 20:4 is not literal. A word study on "thousand" throughout the OT will show that is literal when counting something, ie. coins, people, etc. But, in prophesy it is symbolic for fullness / completeness of time. And, in Rev. 20:4 it means that the martyrs would reign with Christ for a number of years that God would determine as full or complete.

The rest of the dead were those in Hades Paradise and Hades Tartarus (Luke 16:22-31), who had been waiting ever since Abel had died for that moment in time... namely, the destruction of Jerusalem and that old Mosaic sacrificial temple in AD 70. In Matt. 22:1-14, the parable of the wedding feast is a very short precis of Revelation as it lays out the sequence of events:

All of this is repeated in Rev. 20, and the judgment that occurred after Jerusalem was destroyed in AD 70 was when the separation occurred of the rest of the dead that had waited in Hades for thousands of years. Those in Hades Paradise that had already been determined as the faithful when they died were separated to the right, and those in Hades Tartarus that had already been determined as unworthy to the left (Matt. 25:31-46).

The sheep were taken home to heaven with Christ where they continue to reign with Him forever, and the goats were cast into the lake of fire (Rev. 20:15) where the devil, the beast, and the false prophet had also been thrown.

Hades had been a prison with gates, and Christ held the keys (Matt. 16:18; Rev. 1:18). No one could ascend to the Father before Christ's atoning sacrifice. Christ went to that prison after His death on the cross (1 Pet. 3:19) to tell those spirits waiting there that the time was shortly coming for them to be released.

"And I heard a voice out of the heaven saying to me, Write: Happy are the dead who in the Lord are dying from this time!'Yes, (saith the Spirit,) That they may rest from their labours -- and their works do follow them!'" (YLT)

For the last 1961 years, or thereabout, everyone is judged individually as we pass from this mortal life. Those counted worthy are resurrected, changed in the twinkling of an eye, and taken home to be with the rest of the saints in heaven(1 Cor. 15:51-53; 1 Thess. 4:16-17). Those not worthy are judged and sentenced and cast out.

Judgment has been an on-going process on both a national level and an individual level from the throne of God in heaven, and Christ - our High Priest - does not have to come down to the earth to do it.

Rev. 20:4 never says anything about Christ reigning from an earthly physical kingdom.

There are many more misconceptions of the scriptures that must be corrected for the prophesy to be understood. All of the NT was telling those of that special generation of the first century AD when Christ walked on this earth that those were the last days of the old Mosaic sacrificial covenant. The only generation that could have a second appearance of Him (Heb. 9:28) was the one that had seen Him the first time in the flesh (1 John 1:1). See also Matt. 24:34; Mark 13:30; and Luke 21:32.

All of Revelation is traceable to the OT, and the OT is the source code for not only Revelation, but all of the NT. I have many articles posted at my blog here that provide many scriptural evidences for both Christ's first and second "comings", or appearances in the first century AD. The best starting point is at the bottom right margin with "It's Not The End of The World- Part I" and then read through Part X.

You can also find many good studies at preteristcentral.com here

Not the answer you're looking for? Browse other questions tagged revelation preterism or ask your own question.