Can a Catholic priest adopt a child?

A Catholic priest must take a vow of celibacy (i.e. unmarried) and thus expected to remain continent (i.e. abstain from sex) so as not to commit a fornication. Is a priest permitted to adopt a child, given that it does not break this vow? Would it matter if they were the only surviving relative of the child?

The short answer is, “it is theoretically possible but unlikely and uncommon.”

I will begin by pointing out that some Catholic priests are, in fact, married: most of these are Eastern Catholic clergy or converts from Anglicanism who were married before being ordained priests; the rest are priests who have been laicized (i.e., they are forbidden from exercising any ministry and, canonically, are reduced to the lay state) and have received an indult releasing them from their obligation to celibacy.

In these cases, adopting a child poses no particular difficulty.

Assuming we’re talking about a priest from the Western Church still in good standing (i.e., not laicized), Canon Law does not prohibit adoption—indeed it does not mention it at all.

That being said, a celibate priest adopting a child poses a number of difficulties:

If a case like this were to arise, because of the obligations placed on the diocese or institute the priest belongs to and the possibility of scandal, the priest would have to obtain permission from his bishop or religious superior before legally adopting a child. (Simply taking care of a child while he is looking for a couple to adopt him would be a different matter—especially in parts of the world with no foster care or similar program in place.)

Evidently, the Pope can also grant that kind of permission.

However, it would be exceedingly rare for a diocese or institute to grant such a permission, because in the vast majority of cases, it is far better (and even more feasible) to find a couple willing to adopt. Only in a truly exceptional case would it be a good idea for a priest to do so.

Assuming civil law allows the clergy to adopt, an answer would have to address whether Catholic canon law permits it. It would seem not because fathering children would detract from his obligations to the Church (which is a reason why priests cannot marry); he certainly could run an orphanage for such children.

If the Pope could, then a priest could.

It is commonly believed that Pope Pius IX "adopted" a boy in very extenuating circumstances in 1856 and created in international scandal.

The Mortara Affair began on this date in 1856 when a contingent of papal police kidnapped 6-year-old Edgardo Mortara from his parent’s apartment in Bologna because Church higher-ups had learned that the child had been secretly baptized by a maid five years earlier when he was seriously ill. Edgardo was whisked to Rome, “adopted” by Pope Pius IX, and eventually became a priest. Jewish organizations and international leaders protested to the Vatican and called for Edgardo to be returned to his parents, but the pope declared that canon law forbade non-Christians in the Papal States to raise a Christian child, even if the child was their own. Protests in France led to the founding of the Alliance Israelite Universelle in 1860, and helped fuel the movement for Italian unification, which overcame the Papal States in 1870. As an adult, Edgardo was sent on missionizing missions to Jews in Germany and the United States, and vigorously sought the beatification of Pope Pius IX — which finally took place in 2000. Mortara did reconnect to his parents and attended his mother’s funeral in Bologna in 1895. He himself died at 88 in 1940. - June 24: The Mortara Affair 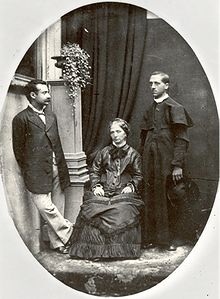 Fr. Mortara with his mother and a brother.

Here is what Wikipedia has to say of the Moratara Case.

Pope Pius IX's determination to keep Edgardo developed into a strong paternal attachment. According to Edgardo's memoirs, the pontiff regularly spent time with him and played with him; the Pope would amuse the child by hiding him under his cassock and calling out: "Where's the boy?" At one of their meetings, Pope Pius told Edgardo: "My son, you have cost me dearly, and I have suffered a great deal because of you." He then said to others present: "Both the powerful and the powerless tried to steal this boy from me, and accused me of being barbarous and pitiless. They cried for his parents, but they failed to recognize that I, too, am his father.

As Brasshat points out in his answer that it is possible for a priest to adopt a Child. I know of some American nuns (sisters) who have receive permission to adopt children.

Blessed Charles de Foucauld (1858-1915) began a program of buying slaves in 1902 in order to free them. For Blessed Charles this was done as a form to encourage adoption. In addition to being adopted himself, he is also one of the Patron Saints of the Adopted in some Catholic circles.

Our Father never failed to add: «Someone will say to me: “But what about me, I have no family to speak of, I have no traditions, I am one of those serfs produced by modern society; so what is to become of me?” I shall answer: “Well, allow yourself to be adopted by Father de Foucauld!” Here we have a family which is open to us through the generosity of this heart of gold. Just as he loved all the members of his own family, he would have desired to have brothers and sisters, and even an entire people of lay folk who would be attached to his work, that is to say, who would share his love for neighbour and then for those furthest away. So, if we have no family, let us allow ourselves to be inserted into this great family of age old France and of the Catholic Church!» - BLESSED CHARLES DE FOUCAULD

Not the answer you're looking for? Browse other questions tagged catholicism priesthood adoption .

7
How do Roman Catholics interpret 1 Timothy 4:3
1
According to the Catholic Church, does any child have the "right" to be baptized?
5
Can a Catholic priest take Anglican services?
8
Can a priest resign?
8
According to Roman Catholic teaching, did Martin Luther's alterations to the order of the Mass invalidate his consecration of the elements?
1
Under what conditions does the Catholic Church explicitly call the laity extraordinary ministers?
5
Can a mentally ill person who takes medication regularly be a Catholic priest?
3
Can Only A Priest Give Confession?
4
Can a Catholic Priest in the Ordinariate be married to a non-Christian?