Is it appropriate (as a Catholic) to make the sign of the cross when passing an Eastern Orthodox, Oriental Orthodox or Church of the East church?

It is an old tradition in Catholicism to make the sign of the cross when passing a Catholic church, as a sign of respect to the Eucharist contained in the tabernacle, located within the Church.

Is it appropriate for a Catholic to make the sign of the cross when passing an Eastern Orthodox, Oriental Orthodox or Church of the East church?

Of course it is!

It is also a tradition for some Catholics to make the sign of the cross when passing in front of cemeteries, whether a Catholic one or otherwise. Of course there would be some of the faithful departed in many of these cemeteries I imagine.

Seeing that the Orthodox Church does have valid sacraments which includes the Eucharist, it would be appropriate for a Catholic to make the sign of the cross when passing in front of a Orthodox church in order to show an external sign of respect of the real presence of Jesus Christ in the consecrated host.

Yes, the Orthodox Churches do have tabernacles in their churches (No. 8) as this image from Wikipedia shows: 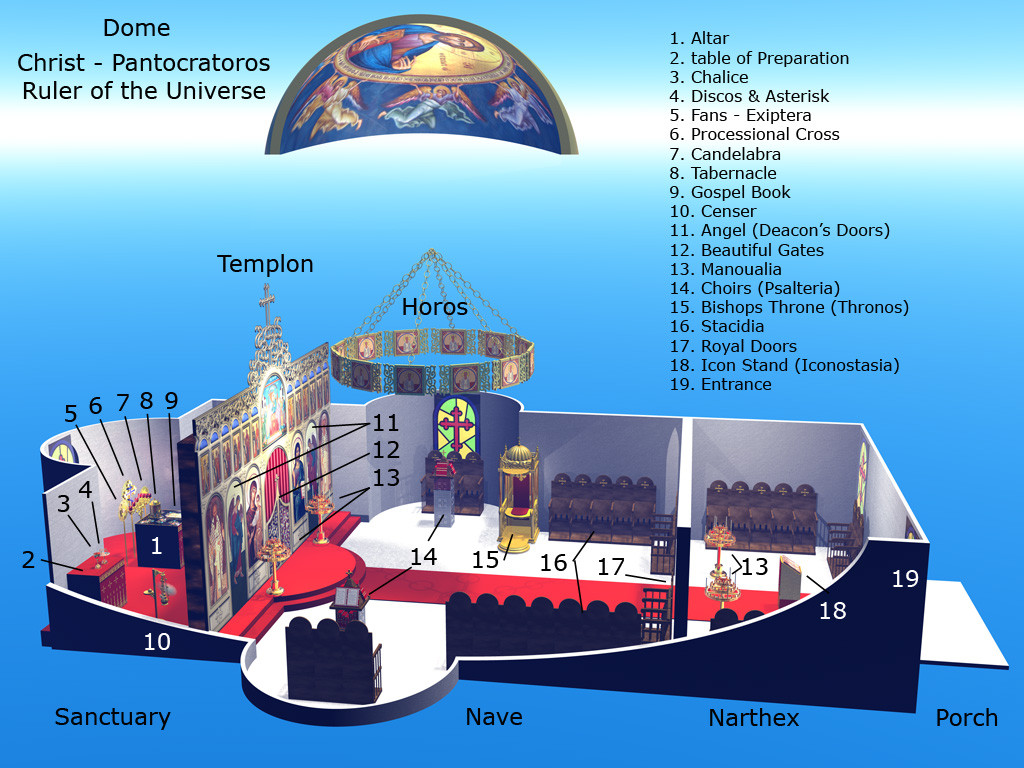 Of course Eastern Orthodox church, like Russian, or Greek, have the tabernacles of Eucharist gifts in their churches. Orthodox christians called it as kibot (ru: Кивот, gr: κῑβωτός). It is always resided at the altar. Frequently, in modern time it has a form of mini church. Usually tabernacles is being covered with a glass hood, and the only bishops, priests, and deacons can touch the tabernacles.

The origin the of tabernacles is very ancient. In 4-th century many church writes note about a pidgins, which the Eucharist gist is kept in. Since the oriental churches, and churches of East, dissociated much later (in 5-6 cen.) it is allowed to think that they are also kept the ancient tradition to use the tabernacles.

Although the Orthodox are, in the traditional Catholic view, schismatic, they do have valid priestly orders, which means they are able to validly consecrate the Eucharist, so I don't see what would be wrong with making the sign of the cross out of respect for the Real Presence of Jesus Christ in the Eucharist in these churches.

Not the answer you're looking for? Browse other questions tagged catholicism eastern-orthodox religious-practice oriental-orthodox sign-of-the-cross or ask your own question.

13
When did the Orthodox and Catholic Churches distinguish the manner in which the Sign of the Cross was to be made?
5
Do Orthodox churches offer daily Mass?
10
From the perspective of Roman Catholicism, what do Orthodox churches have to do to become “Eastern Catholic Churches”?
5
How do the Eastern Orthodox view using the term 'catholic', particularly in regard to Roman Catholicism?
12
At what point did the Roman See start self-identifying as the Catholic Church?
5
At what point did the Eastern Church start self-identifying as the Orthodox Church?
6
What objective, foolproof method do Eastern Orthodox have for working out which side is correct in the case of a Schism?
1
Is the Patriarch of Alexandria an Eastern Orthodox or an Oriental Orthodox?
1
What are the core differences between Protestants and Eastern Orthodox Christianity?