Does Roman Catholicism teach that appearances of *Santo Nino De Atocha* have some particular meaning?

Last night my elderly father sat up in bed, in the middle of the night, and he saw an image of Santo Nino De Atocha standing at the foot of his bed.

My father is very religious. He believes all images have a meaning when they appear to an individual. Thus we are wondering what it means for this saint to appear to you, according to Roman Catholicism:

Does Roman Catholicism teach that appearances of Santo Nino De Atocha have some particular meaning?

Ultimately no one can truly say why the Santo Nino De Atocha, appears to someone. But that said particular circumstances of an individual surrounding may shed some light on a possible reason.

It seems that the saintly apparition of the Holy Infant of Atocha should be in some way a consolation of sorts, possibly only known to the individual.

Apparitions of the Saints are not uncommon in the history of the Catholic Church. The Holy Infant of Atocha seems to be no exception.

El Niño de Atocha seems to appear to people in need. What that need is can be very diverse or when danger is physically present as when the faithful made perilous pilgrimages:

He (Holy Infant of Atocha) would especially appear to them when they found themselves in dangerous situations, often pointing to them the safe route to take to avoid any danger. Many times, He would accompany them on their journey. The descriptions of Him were always the same: He had a pilgrim’s dress, a hat with a plume and a cape about His Shoulders. In His left Hand, He held a pilgrim’s staff with a gourd of water attached. - The Story of the Holy Infant of Atocha

On other occasions, he would heal them of some infimity:

In Mexico city, 1996, a girl went to an eye clinic for grave eye problems. The Holy Infant of Atocha appeared to her when she was 17, assuring her that she would not feel any pain, that she would be healed, which happened to the amazement of the doctors there. There are parishes and shrines named after Him both in Mexico and in the United States, as well as Spain. Pilgrimages to Spain to honor Him are still common as are those to Mexico. - The Story of the Holy Infant of Atocha 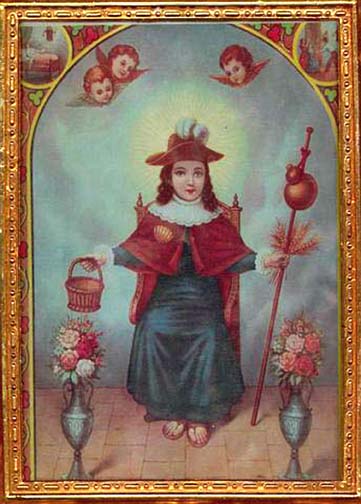 Whatever the situation may be the Santo Nino De Atocha appearing to someone is a heavenly sign that some sort of grace has been accorded to an individual or his family.

Not the answer you're looking for? Browse other questions tagged catholicism saint or ask your own question.