Could a Catholic priest potentially use a digital tablet (iPad, etc.) for the Lectionary or the Book of the Gospels during mass?

In the Catholic Masses I have been to, it begins with a procession of the priest along with acolytes and such and someone is holding up the Book of the Gospels decorated in gold or otherwise. This gets placed on the altar and the priest reads from it.

Could a Catholic priest potentially use a digital tablet (iPad, etc.) that contains the text of the Book of the Gospels (or the Lectionary for that matter) in place of this gilded one used during mass? Is there some requirement that the one used in mass has to have a certain appearance, or be made in a certain way? While I'm sure there are a number of reasons that this wouldn't be done (the possibility of technical difficulties, disapproval from parishioners who think it's inappropriate), is there anything within canon law or other church "rules" that would prevent this?

Could a Catholic priest potentially use a digital tablet (iPad, etc.) for the Lectionary or the Book of the Gospels during mass?

It seems the Rome has not yet pronounced on this matter officially. Yet the New Zealand Catholic Bishops Conference has made a statement on this subject matter. They responded in the negative. 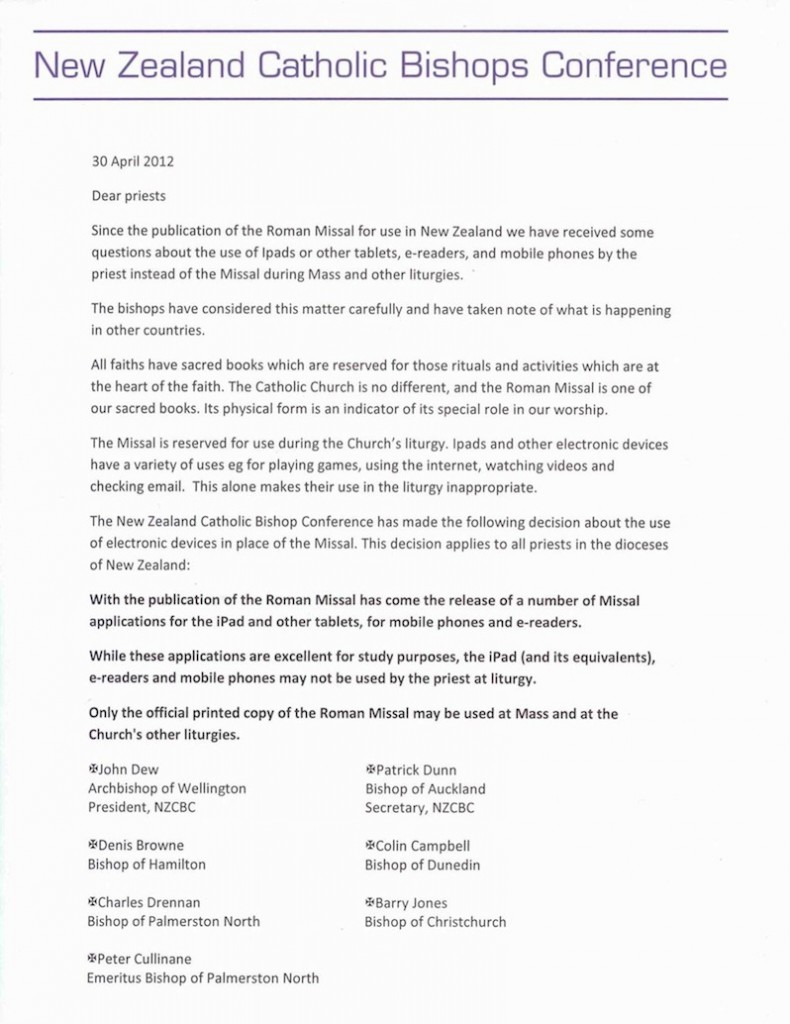 When the priest is finished proclaiming the Gospel at mass, he reverently kisses the Lectionary. This would seem like a lack of liturgical decorum to kiss some sort of electronic devices.

Not the answer you're looking for? Browse other questions tagged catholicism mass technology or ask your own question.

4
How do Catholics view physical and digital copies of the Bible?

12
Format for the Catholic Mass
11
What is the significance of priest breaking the bread (Host) in a Catholic mass?
12
What is the reasoning for Latin being the official language of Catholic Mass?
2
Can anyone explain Pope Paul VI's arguments in favor of Padre Pio?
8
What is the theological justification for only the priest drinking the wine in a Catholic Mass?
1
During the Mass, may the Priest skip the Act of Penitence and the Kyrie Eleison?
3
Can a Uniate (Eastern) Catholic priest celebrate the Mass according to the Latin Rite?
4
Does the priest ask for reasons to prevent a marriage during a Catholic wedding?
2
Where in the Catholic Church is red wine used for mass?
0
What keyboard hymnals do beginner piano accompanists use to learn the Catholic Mass?