What constitutes a half-tribe?

In Joshua 1:12, Joshua talks to the Reubenites, the Gadites, and the half-tribe of Manasseh.

What made the Manasseh a half-tribe? The Bible doesn't refer to the Reubenites and the Gadites as "half" a tribe. Why are they a "full" tribe compared to the tribe of Manasseh?

Now the Reubenites and the Gadites owned a very great number of cattle. When they saw that the land of Jazer and the land of Gilead was a good place for cattle, the Gadites and the Reubenites came and spoke to Moses, to Eleazar the priest, and to the leaders of the congregation, saying, “Ataroth, Dibon, Jazer, Nimrah, Heshbon, Elealeh, Sebam, Nebo, and Beon—the land that the Lord subdued before the congregation of Israel—is a land for cattle; and your servants have cattle.” They continued, “If we have found favor in your sight, let this land be given to your servants for a possession; do not make us cross the Jordan.” (Numbers 32:1–5)

Later in the chapter, half of the tribe of Manasseh is included among the "Transjordan Tribes" that settled east of the Jordan River rather than in the Holy Land proper:

Moses gave to them—to the Gadites and to the Reubenites and to the half-tribe of Manasseh son of Joseph—the kingdom of King Sihon of the Amorites and the kingdom of King Og of Bashan, the land and its towns, with the territories of the surrounding towns. And the Gadites rebuilt Dibon, Ataroth, Aroer, Atroth-shophan, Jazer, Jogbehah, Beth-nimrah, and Beth-haran, fortified cities, and folds for sheep. And the Reubenites rebuilt Heshbon, Elealeh, Kiriathaim, Nebo, and Baal-meon (some names being changed), and Sibmah; and they gave names to the towns that they rebuilt. The descendants of Machir son of Manasseh went to Gilead, captured it, and dispossessed the Amorites who were there; so Moses gave Gilead to Machir son of Manasseh, and he settled there. Jair son of Manasseh went and captured their villages, and renamed them Havvoth-jair. And Nobah went and captured Kenath and its villages, and renamed it Nobah after himself. (Numbers 32:33–42, italics added)

Here is a map showing the tribal allotments, including the allotments for half of the tribe of Manasseh east of Jordan, and half west of Jordan: 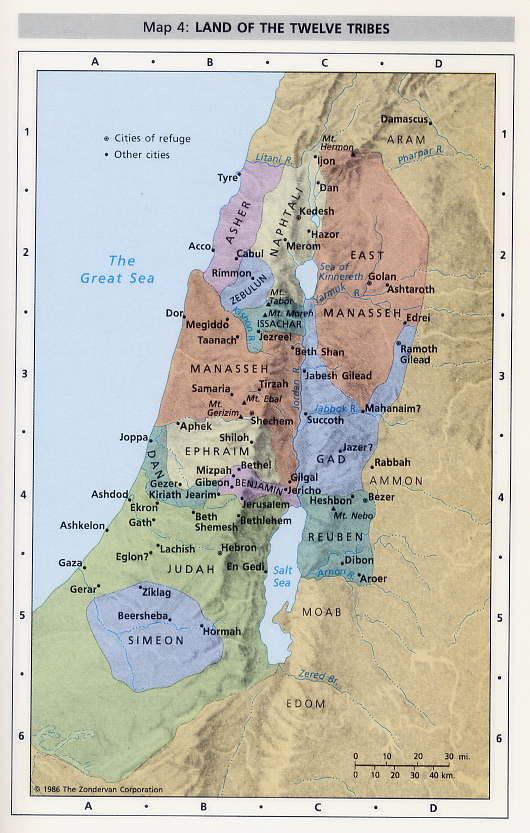 The half-tribe of Manasseh mentioned in Joshua 1:12 is the half of that tribe that settled east of the Jordan, along with the full tribes of Reuben and Gad.

Not the answer you're looking for? Browse other questions tagged exegesis israel joshua or ask your own question.

15
What are the Twelve Tribes of Israel?
4
Why are both Joseph and Manasseh listed as separate tribes in Revelation chapter seven?
1
Why does the Bible talk only about the people of Israel?
5
38 or 29 cities?
11
What is the Biblical basis for using the names “Yeshua” and “Yehoshua” (Joshua) for Jesus?
0
Where Did Joshua 22 Take Place