Why do Catholics usually baptize by pouring?

This sacrament is called Baptism, after the central rite by which it is carried out: to baptize (Greek baptizein) means to "plunge" or "immerse"; the "plunge" into the water symbolizes the catechumen's burial into Christ's death, from which he rises up by resurrection with him, as "a new creature."

Hence Baptism is a bath of water in which the "imperishable seed" of the Word of God produces its life-giving effect.32 St. Augustine says of Baptism: "The word is brought to the material element, and it becomes a sacrament."

definition of bath (multiple definitions, most I believe involve being covered by water)

the quality or state of being covered with a liquid

The essential rite of the sacrament follows: Baptism properly speaking. It signifies and actually brings about death to sin and entry into the life of the Most Holy Trinity through configuration to the Paschal mystery of Christ. Baptism is performed in the most expressive way by triple immersion in the baptismal water. However, from ancient times it has also been able to be conferred by pouring the water three times over the candidate's head.

CCC 1239 mentions in ancient times pouring was allowed, but when did that occur (what is the history of baptism)? Why is pouring of water used more often than immersion (ease/safety)?

Baptism by total immersion is permitted in all Rites of the Catholic Church.

Some diocese still offer the option of full immersion baptisms.

Before going on, I would like to make a distinction in the term Catholic. I believe that this question deals with Catholics of the Roman (Latin) Rite and not Eastern Rite Catholics.

The increasing popularity for baptizing by immersion is probably related to a liturgical principal favored by the Second Vatican Council: the expressive use of signs. The General Instruction of the Roman Missal says that good signs “will more effectively foster active and full participation and more properly respond to the spiritual needs of the faithful” (20). This is why we promote such ideas as wearing noble vestments, reading from a beautiful Book of the Gospels, and receiving communion under both kinds. All these signs, when used richly, respond to the spiritual needs of the community. Baptism by Immersion

That said, some dioceses do offer baptism by immersion.

Check out this article: Many Catholics Choose Baptism by Immersion.

For more information see these:

Can Catholics choose to be baptized by immersion?

Why do Catholics usually baptize by pouring?

It is hard to get a definite answer on this, but it there may be several factors involved. One being how to baptism the infirm. Another being that Catholic baptisms usually occur near the entrance of the church as a sign of welcoming the newly baptized into the life of the church.

Cyprian advised that no one should be "disturbed because the sick are poured upon or sprinkled when they receive the Lord’s grace" (Letter to a Certain Magnus 69:12 [A.D. 255]). Tertullian described baptism by saying that it is done "with so great simplicity, without pomp, without any considerable novelty of preparation, and finally, without cost, a man is baptized in water, and amid the utterance of some few words, is sprinkled, and then rises again, not much (or not at all) the cleaner" (On Baptism, 2 [A.D. 203]). Obviously, Tertullian did not consider baptism by immersion the only valid form, since he says one is only sprinkled and thus comes up from the water "not much (or not at all) the cleaner." - Baptism: Immersion Only?

If you have ever visited a Catholic Church, you will notice that there is a baptismal font near the entrance. However in centuries gone by the Catholic Churches, baptism by immersion was held in high esteem. In the Early Church, places of worship sometimes had what they call baptisteries and were used for total immersion. Somewhere down the line, the Church moved away from having elaborate pools attached to cathedrals for baptisms to more modest baptismal fonts for baptism by pouring water over the candidates head. The reason for the change may have been a practical one, as a baptismal font can be easily placed in a church. 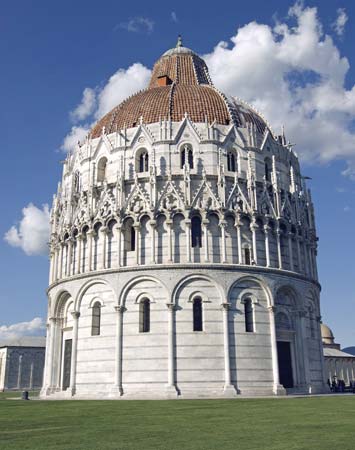 More information on this subject can be found here: Theological Reasons for Baptistry Shapes.

Not the answer you're looking for? Browse other questions tagged catholicism biblical-basis church-history baptism .

49
Was baptism practiced before Christ?
11
Can Catholics choose to be baptized by immersion?

7
Is it valid to baptize multiple persons at once?
8
Which type of Baptism is preferred in today Catholic Parishes?
2
Does the Pope have the authority to baptize aliens (martians)?
2
Why do Orthodox Christians baptize infants?
4
Why do Baptists even baptize in water at all considering their "spirit baptism" views?
7
What is the biblical argument against baptism by sprinkling/pouring?
2
Refusing to Baptize Illegitimate Infants
1
Why do Catholics baptize children?
0
Why did not Jesus personally baptize anyone?