What is the basis for the Catholic teaching that Mary is holy?

From the Gospel of St. Luke:

41 And it came to pass, that, when Elisabeth heard the salutation of Mary, the babe leaped in her womb; and Elisabeth was filled with the Holy Ghost:

42 And she spake out with a loud voice, and said, Blessed [art] thou among women, and blessed [is] the fruit of thy womb.

43 And whence [is] this to me, that the mother of my Lord should come to me?

44 For, lo, as soon as the voice of thy salutation sounded in mine ears, the babe leaped in my womb for joy.

45 And blessed [is] she that believed: for there shall be a performance of those things which were told her from the Lord.

Note that St. Elisabeth is first filled with the Holy Spirit, then speaks the following lines with authority derived from that Inspiration. And she calls Our Lady “blessed,” which in this context means “Saint.”

In the next versicle, the Magnificat starts (46–55), but one part in verse 48 stands out for our purposes:

48 For he hath regarded the low estate of his handmaiden: for, behold, from henceforth all generations shall call me blessed.

Catholics and Orthodox (and Miaphysites and the Church of the East, as well) all hold that this Evangelic command to “call [Our Lady] blessed” is fulfilled by our counting her as the first among the blessed, and the holiest of all creatures after the Triune God. After all, she was granted that unique privilege to bear the Word of God himself. 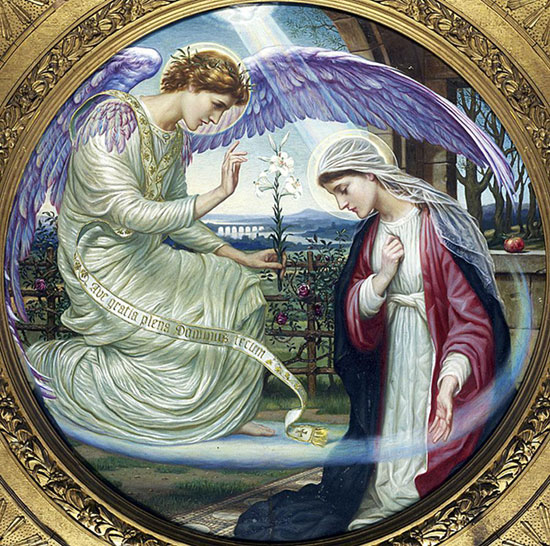 There are many reasons Mary is holy.

Chief among them her Divine Motherhood.

That is, the fact that Mary actually became the mother of God. This alone implies a dignity unimaginably magnificent and impossible to appreciate fully. When you ponder it more deeply, it is really something sublime.

The Divine Motherhood of Mary is proven by two Biblical facts:

a) Mary is truly the Mother of Jesus Christ:

b) Jesus Christ is truly God in the flesh.

Mary being 'Mother of God' is simply the answer to the question: Of whom was Mary the mother? To which of course the answer is 'true God and true man, Jesus Christ, God the Word incarnate—and no other.' John 1:1,14.

That Mary was chosen of all the women on earth, from all time, to bear the Only-Begotten Son of God speaks volumes (and many have been written thereof).

Besides these, here are a few more reasons which derive from this glorious truth:

Mary, Ark of the New Covenant

Ark of the Old Covenant, Ark of the New Covenant:

● In which God was truly and physically present with us

● Cymbals and harps and lyres etc were played to play music before the Ark, and right after: ● David danced and lept joyously before the Ark

● At the sound of Mary’s voice: ● John the Baptist lept for joy in Elizabeth’s womb in Mary’s presence

● David rejoices with “shouts and sound of the trumpets” in the presence of the Ark ● Elizabeth “exclaimed with a loud voice” to Mary praises of her being “blessed among women” (Judith 13:18)

● Contained Manna (their sustenance/food) from Heaven ● Contained the Bread of Life, Jesus, “who [came] from heaven”, who was born in BethLechem ('house-of-bread').

● Is covered within and without with the purest gold by virtue of its being the dwelling/visiting place of the Most High God. ● Of most pure virtue, and (perpetual virginity (Ezekiel 44:1-2), and without stain sin by virtue of the One to whom she would give flesh and be the mother of.

Or said beautifully by Athanatius of Alexandria:

“O noble Virgin, truly you are greater than any other greatness. For who is your equal in greatness, O dwelling place of God the Word? To whom among all creatures shall I compare you, O Virgin? You are greater than them all O [Ark of the] Covenant, clothed with purity instead of gold! You are the Ark in which is found the golden vessel containing the true manna, that is, the flesh in which Divinity resides.” (Athanasius of Alexandria, Homily of the Papyrus of Turin ~370AD)

Other very significant prophetical elements of the Ark of the Covenant:

Ark of the Old Covenant

● Exodus 25:10 "And they shall make an ark of shittim wood..." Even in the Septuagint, this is rendered 'incorruptable wood', i.e. imperishable wood, because it is a specific type of wood that doesn't rot. (Exodus 37:1)

● Exodus 37:2 And he overlaid it with pure gold within and without, and made a crown of gold for it round about."

Ark of the New Covenant (Mary)

● All existing Traditions about Mary are such that Mary corrupt (but she did die, like her Son did) because she did not suffer this consequence of Original Sin, from which she was preserved

● People have always prayed to Mary as a chief intercessor on their behalf with Christ ("Pray for us that we may be worthy of the promises of Christ", "Pray for us sinners now and at the our of hour death" etc) as a most potent means of asking God with great success, even when we ourselves are far less worthy to be receive than His blessed mother to ask. She has worked many miracles throughout the Christian era, the era of Christ.

The fulfillment of an Old Testament type is always, without exception greater in every sense to its former shadow, "even as one's shadow is inferior to himself", as St. Thomas Aquinas said.

So if the Ark was the "glory" of Israel, and was "the holy Ark" (2 Chroincles 35:3), then Mary was also extremely holy indeed. (same "you are the glory of Israel" is said of Judith (Judith 15:9), an amazing type of the Blessed Virgin Mary, too!)

Now given this, might we expect the Ark to be somehow connected with Mary, the bearer of the Christ and His mother, to be made somewhere explicitly? Well, we find such a thing in Revelation 12! Consider a little context, firstly:

In chapter 11, which precedes it, the context is unrelated to the Ark, and relates the unleashing blowing of the angel's trumpet,woes etc.

Notice, it is a short chapter, and ends abruptly with:

"Then there was opened the temple of God that is in heaven; and there was seen in his temple the Ark of his covenant; and there followed lightnings, and voices, and thunders, and an earthquake, and great hail."

The end. Now, I don't know about you, but that is an abrupt and unnaturally mysterious ending to a chapter(even for Revelation). Well, we're in luck. Luckily, the Apostles didn't separate their books of the New Testament into chapters or verses.The original manuscripts are just free-running texts. In other words, the 'chapters' and 'verses' are for reading ease _and are man made—centuries later additions for translations.

Well, it seems John did not end there when he introduced the Ark.

He 'explains' it with a certain 'Woman'.

So just after revelation 11:19, the original manuscripts does not change to a different chapter, it continues (to Revelation 12:1...)!

"And a great sign appeared in heaven: A woman clothed with the sun*, and the moon under her feet, and on her head a crown of twelve stars: she was pregnant and crying out, and in pain to give birth." (v1)

This particular Woman gives birth to Jesus Christ. This Woman is Mary. This Woman has overtones of the church, too, and has been interpreted as both at the same time (we're dealing with highly symbolic stuff here in revelation, after all):

"And she [the Woman] brought forth a male child, who was to 'rule all nations with an iron rod': and her son was taken up to God, and to his throne." (v5)

Clearly, her Son is Jesus Christ. Clearly, this is symbolizing Mary, then. Funny how she is the description of the vision of abrupt vision the Ark as we might predict!

Mary's Perpetual Virginity (remaining a virgin before, during and after the miraculous virgin birth of Christ)

Well, people who suppose that this pure Ark, Mary, could lie intimately with a man, is to ignore the great reverence and veneration due to the Ark—people were stricken dead by God on the spot for even peering into or touching the Ark, even for 'legitimate' or 'licit' reasons. It is where God Almighty dwelt. Moses had to take his sandals off for even walking on the ground God was present at.

Speaking of legitimate reasons: is virginity/'celibacy' related to a higher spiritual calling or is is more valuable or precious? And the answer is yes. St. Paul argues exactly so in 1 Corinthians 7:6-8. And so does Jesus in Matthew 19:~10-12.

Virginity is also equated with holiness in Revelation 14:4 and elsewhere.

Finally, Mary more than implies she intends to remain virgin, or had taken some kind of vow of virginity. We read when the angel Gabriel greeted her and told her she would concieved and bear a Son, she asked:

"How can this be, seeing I know not man?" (Luke 1:34) This is a Hebraism or euphemism for "I do not have/have not had sexual relations with a man". And she asks it even though already betrothed/married to Joseph (and thus she shows this child would be the result of the consummation of that marriage).

The only way to make sense of her question is to acknowledge she had taken a vow of virginity.

Not the answer you're looking for? Browse other questions tagged catholicism virgin-mary perpetual-virginity .

28
Why can't Catholicism just drop its Marian devotion?
23
What is the biblical basis for the Immaculate Conception?
16
What is the earliest known instance of a petition directed to Mary?
-1
What is the scriptural evidence that Mary was always a virgin?