Do any traditions hold that the Jews will return to Israel prior to Christ's Second Coming?

I have heard that the Second Coming of Jesus must be preceded by Jews returning to their homeland of Israel.

Yes! There is a tradition that came from Israel, which is now nearly 2,000 years old.

37 “O Jerusalem, Jerusalem, the one who kills the prophets and stones those who are sent to her! How often I wanted to gather your children together, as a hen gathers her chicks under her wings, but you were not willing! 38 See! Your house is left to you desolate; 39 for I say to you, you shall see Me no more till you say, ‘Blessed is He who comes in the name of the Lord!’ ”

So far, the Jews haven't said that as they don't all currently believe that He is the Messiah. Some do like the Chai v'Shalom congregation, but not all.

Then Jesus prophesies of the destruction of the temple in 70 A.D. when He says the following as recorded in Mark 13:2 (NKJV):

2 And Jesus answered and said to him, “Do you see these great buildings? Not one stone shall be left upon another, that shall not be thrown down.”

Here is an article on the history of Israel from 70 A.D to 1948 A.D. and how it was not populated by the Jewish people for that period of time.

Now to follow up what will happen in the future, we can look at some more Jewish traditional history. Thus we can explore how & why Jerusalem gets restored.

An older tradition talks about the coming of the day of The Lord. It's recorded in Zechariah 14 & it's still in the future. Here are some excerpts:

1 Behold, the day of the Lord is coming, And your spoil will be divided in your midst. 2 For I will gather all the nations to battle against Jerusalem;...

Did you note that part about all the nations. When the temple was destroyed in 70 A.D. it was destroyed by 1 nation: The Roman Empire. So verse 2 discusses the future, as in post 2017... I don't know when... but in the future.

Then from 1 Thessalonians 4:16 (NKJV), where a Jewish Pharisee wrote:

16 For the Lord Himself will descend from heaven with a shout, with the voice of an archangel, and with the trumpet of God. And the dead in Christ will rise first.

This tradition from the past also talks about the return of the saints in Heaven accompanying Jesus, right before the battle of Armaggedon:

3 Then the Lord will go forth And fight against those nations, As He fights in the day of battle. 4 And in that day His feet will stand on the Mount of Olives, Which faces Jerusalem on the east. And the Mount of Olives shall be split in two, From east to west, Making a very large valley; Half of the mountain shall move toward the north And half of it toward the south. 5 Then you shall flee through My mountain valley, For the mountain valley shall reach to Azal. Yes, you shall flee As you fled from the earthquake In the days of Uzziah king of Judah. Thus the Lord my God will come, And all the saints with You.

Did you catch that the Mount of Olives will be split in two & replaced by a valley, next to Jerusalem? That hasn't happened yet. Neither have all of the saints in Heaven returned to Earth yet. According to the 2,000 year old tradition from Israel, which has been passed down through the ages to us today... those events are still in the future. The Mount of Olives doesn't look like a valley yet.

Then after that we see what will happen in the future, according to another tradition. This one was written down by John in Revelation 21:1-2 (NKJV):

1 Now I saw a new heaven and a new earth, for the first heaven and the first earth had passed away. Also there was no more sea. 2 Then I, John,[a] saw the holy city, New Jerusalem, coming down out of heaven from God, prepared as a bride adorned for her husband.

10 And he carried me away in the Spirit to a great and high mountain, and showed me the great city, the holy[h] Jerusalem, descending out of heaven from God, 11 having the glory of God. Her light was like a most precious stone, like a jasper stone, clear as crystal.

Apparently, God is designing a new Heavenly city & it will be called Jerusalem. God will live here on Earth in the new Jerusalem. Imagine it looking like this rendition. If you read the Jewish traditions in the Bible, you can find out more details about it! 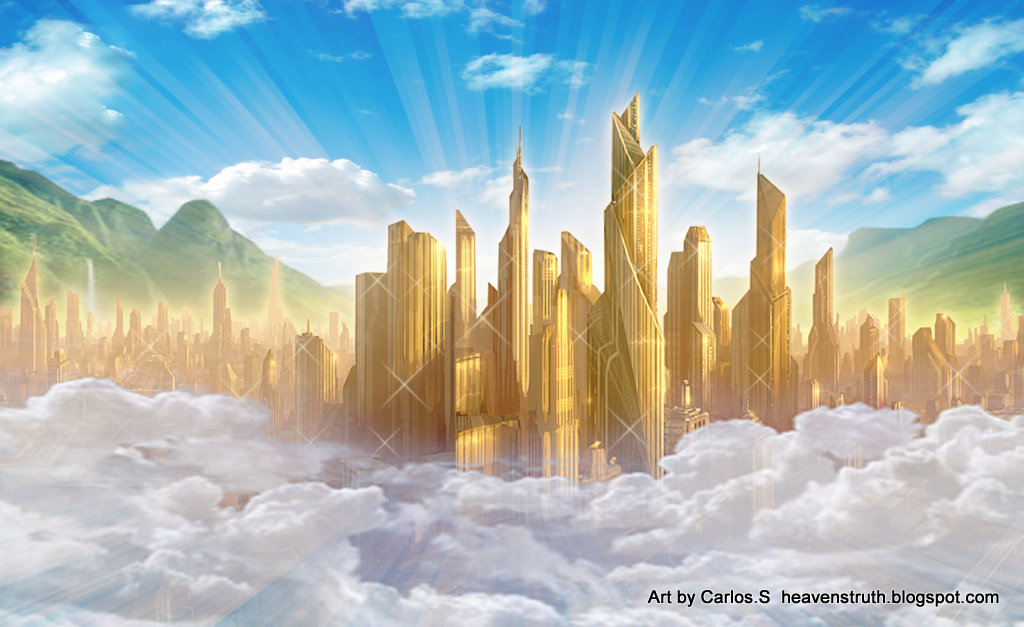 3 And I heard a loud voice from heaven saying, “Behold, the tabernacle of God is with men, and He will dwell with them, and they shall be His people. God Himself will be with them and be their God.

Which is a pretty cool tradition about why "the Second Coming of Jesus must be preceded by Jews returning to their homeland of Israel."

Traditions which take the Bible end-times events literally tend to take prophecies regarding the Jews literally, including their return to Israel.

Then it will happen on that day that the Lord Will again recover the second time with His hand The remnant of His people, who will remain, From Assyria, Egypt, Pathros, Cush, Elam, Shinar, Hamath, And from the islands of the sea.

Isaiah 66:7-8 tells us that they will become a nation quickly. This occurred in one day in 1948 when the British gave the land to the Jews:

Zechariah 8:4-5 tells us that they will once again inhabit Jerusalem, which, of course, is true today:

“Thus says the Lord of hosts, ‘Old men and old women will again sit in the streets of Jerusalem, each man with his staff in his hand because of age. ‘And the streets of the city will be filled with boys and girls playing in its streets.’

Many Christians who believe that the Lord is coming soon use these and similar verses as forerunners to that event. Due to these and other prophecies of the end times, Israel must be a literal nation prior to Christ's return in order for the prophecies to make sense.

Christians who hold to a pre-tribulation view accept the literal aspect of these verses.

Not the answer you're looking for? Browse other questions tagged eschatology israel jews second-coming .

12
Do all Christian traditions expect a second coming of Christ?
9
How will Jesus be recognized at the time of "Second Coming"?
4
Are there Christians that try to change the date of Second Coming through their actions?
6
Second Coming of Jesus Christ on Easter Sunday?
5
Why are three "Comings" a problem?
3
If Israel is the vine that prefigures Jesus, the "true" vine, isn't Israel's purpose fulfilled?
9
What is the Biblical Basis for Christ returning with a physical body at the Second Coming?
2
What is the Full Preterist view on Noah's flood and how it compares to the second coming of Christ?