Someone purchased a copy of "The Christmas Cat" by MaryAnn MacDonald for my children. At the end of this fictional book depicting a cat which soothes a colicky baby Jesus and helps Jesus (and his family) escape to Egypt without being detected by Herod's guards by keeping him calm, the author claims in the author's note that this story has a basis in legend. The author writes,

Leonardo da Vinci loved to draw La Madonna del Gatto, or the Madonna of the Cat. He made many drawings of her in 1480 and 1481. In the drawings, the chubby child Jesus is depicted holding, stroking, and playing with a cat.

Legend tells about a cat living in the stable in Bethlehem who purred Jesus to sleep the night he was born. 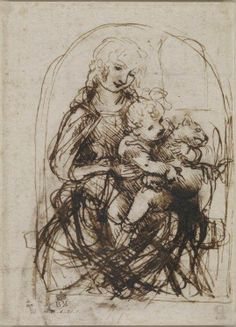 What is the origin of this uncited legend? What is the earliest literary or pictographic representation of Jesus with a cat in Bethlehem?

What are the origins of La Madonna Del Gatto?

To put it in a nutshell, we may never know.

Q: Any information on "gatta della Madonna" – a legend that at the time of the birth of Christ, a cat in the manger gave birth to a litter of kittens and was the inspiration for Giulio Romano's painting, Madonna della Gatta – will be greatly appreciated.

A: We found in our holdings a Holy Family by Giulio Romano which depicts Mary, Saint Elizabeth or Ann, St. John and Jesus, with Joseph in the background. The painting also features a cat in the lower right corner. It may not be the one you are referring to, or is it? There is another representation of the Holy Family by Baroccio called The Madonna del Gatto. The cat is being pointed to by the mother who shows the little animal to her son, Jesus. Saint John is part of the holy company. In both cases we are not dealing with an explicit reference to the nativity scene. Jesus is now a toddler and the whole scene reflects the family life in Nazareth.

The classical creche traditions do not know of the presence of cats, but there may be exceptions. We also have studies by Leonardo da Vinci for a Virgin and Child with a kitten in the British Museum. However, there exits a legend – somewhat nebulous and farfetched – about the presence not only of a cat and her kittens beneath the manger but also of a whole menagerie. The so-called Gospel of the Holy Twelve by G. J. Ouseley (1923) which claims to be "a translation of an early Christian document preserved in one of the Buddhist monasteries in Thibet" (see: M. Oldfield Howey, The Cat in the Mysteries of Religion and Magic, NY 1956) says the following:

"And there were in the same cave an ox and a horse and an ass, and a sheep, and beneath the manger was a cat with her little ones, and there were doves also, overhead, and each had its mate after its kind, the male with the female. Thus it came to pass that he was born in the midst of the animals which, through the redemption of man from ignorance and selfishness, he came to redeem from their sufferings, by the manifestation of the sons and the daughters of God."

It remains a puzzling fact that the traditional sources of iconographical motifs remain silent. This applies to the apocryphal gospels, the classical Marian legends of the West, even the Physiologus, one of the most popular and widely read books of the Middle Ages which inspired most of the bestiaries, meaning books dealing with anecdotes, legends and illustrations of known and mythic animals. There is a hunch that should be further pursued. The cat has an important place in Chaldean and Egyptian magism. The cat is seen in close symbolic relationship with the Goddess Isis. It is suggested that the English word "Puss" is derived from "Pasht," a form of the Egyptian Isis. Thus, it would be interesting to have a closer look at the Coptic Marian legends influenced by Egyptian culture and milieu. – Answered by Father Johann Roten, S.M. (Gatta della Madonna)

Not the answer you're looking for? Browse other questions tagged birth-of-jesus animals legend cats or ask your own question.